Volleyball preview: S. Rowan looks to build on success of 2018 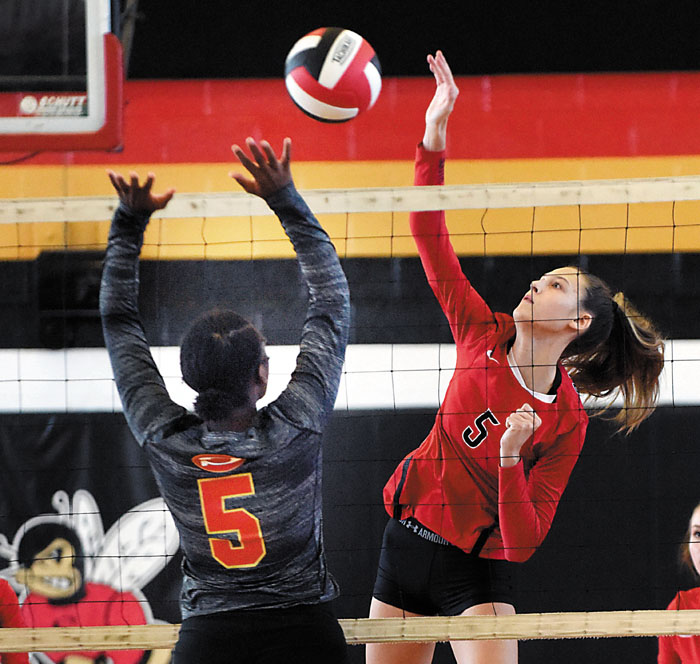 Wayne Hinshaw file photo/for the Salisbury Post ... South Rowan Anna Rymer, right, is an All-County performer returning this season, as is her cousin, Kira. Defending for Salisbury during this match last year in Journie Dawson, left.

Playoffs: Lost 2nd round to Forbush

All-county first cousins Kira and Anna Rymer are expected to be two of Rowan County’s top players, while sisters Payton and Cameron Black are young players with bright futures.

Senior Makenzie McGuire, half of a set of athletic twins who are all over the place for South athletics, will also be a bigger factor this season.

South was overshadowed somewhat in in the county in 2018 by 3A powerhouses West Rowan and Carson, but the Raiders accomplished tremendous things in their league. Since moving down to 2A prior to the 2017 season, South has taken on a bully role in the Central Carolina Conference. South went 15-3 for third place in 2017 and was 16-2 last year, sharing a regular-season league championship for the first time in program history. It was a three-way deadlock with perennially stout West Davidson and Ledford.

South turned in a sharp 22-6 overall record, was 14th in the final 2A MaxPreps rankings and probably won every match it was supposed to win. The losses were to West Rowan, Carson, 2A state runner-up West Davidson (once in the regular season, once in the CCC tournament), Ledford and Forbush.

South has made the playoffs in all four of coach Jenna Horne’s seasons. The last two seasons, South won a first-round playoff match. Those were only the third and fourth playoff victories in school history, so the Raiders are definitely on an upswing.

“It was a really good season last year and we hope we can build on it,”  said Horne, who teaches match. “Our goal this year is being first instead of tying for first.”

South had a productive summer that included a trip to UNC’s camp.

“That was a good bonding experience and we got in a lot of extra games,” Horne said. “We’ve got five girls who played together on a club team and they’ve played together a lot. We’ve also been pushing hard in practice since the first of August.”

The graduation of Janiya Downs, a phenom who was twice named Rowan County Athlete of the Year, changes some things for South. Downs could use her height, spring and reach to create flurries of points at the net. The numbers she put up in 2018 — 372 kills, 86 blocks — tell only part of the story. She inspired her teammates and flooded them with confidence.

“Janiya is not someone we can replace with any one person,” Horne said. “But we still have a lot of excellent players who we expect to play big for us.”

Senior Kira Rymer combines size with surprising agility and skill. Her versatile stat line last season — 397 kills, 269 assists, 248 digs, 67 aces, 28 blocks — is remarkable. She does everything, and with Downs gone, she’ll be asked to do even more. She’ll play opposite the setter in South’s rotation and will be the go-to hitter.

Junior Anna Rymer is South’s primary setter, but she’ll also get her share of kills from the middle. She had 462 assists last season, as well as 152 digs and 93 kills.

Senior outside hitter Ashlyn Faw is a dynamic server (34 aces) and strong defender (214 digs) and will be counted on to boost her kills total.

McGuire’s role is primarily defensive. She had 61 digs last season.

Payton Black turned in a super freshman season as the libero and piled up 475 digs. Now Payton has her younger sister, Cameron, to help on the back row, so she’ll be employed as an outside hitter, as well as a defender.

Other returners for the Raiders are senior Aleyana Littlejohn and juniors Kendall Walter and Kendall Rockstad.

“All of our girls have improved,” Horne said.

West Davidson and Ledford lost a lot to graduation, so South figures to have a realistic chance to win its league. A team to watch in the CCC is Central Davidson.

South has a huge early CCC game at home against Ledford on Aug. 22.

The Raiders will take on West Rowan, West Davidson and Carson early in September, so they’ll find out where they stand in a hurry.