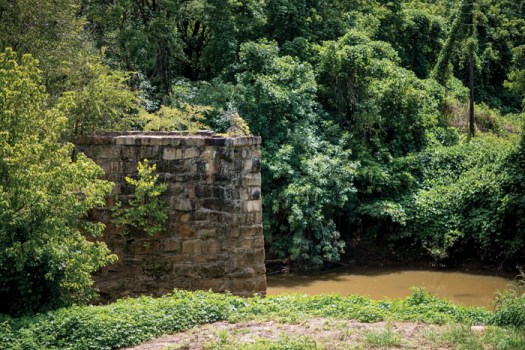 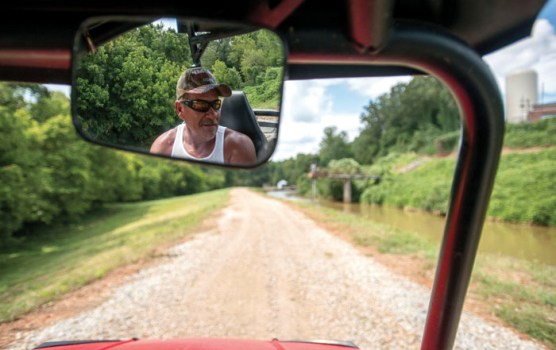 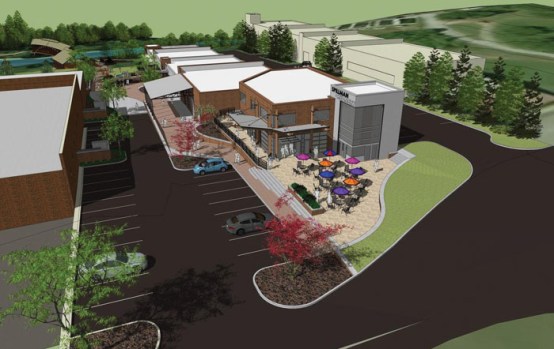 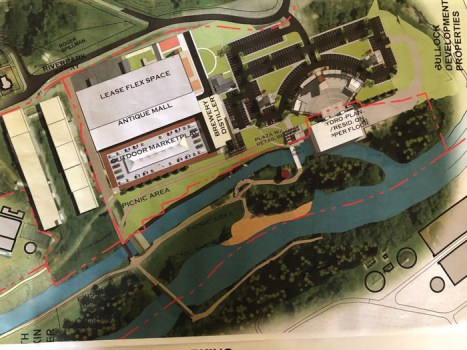 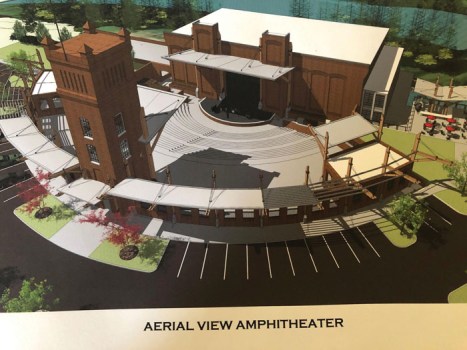 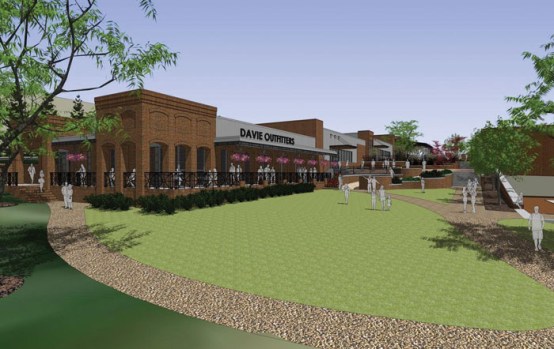 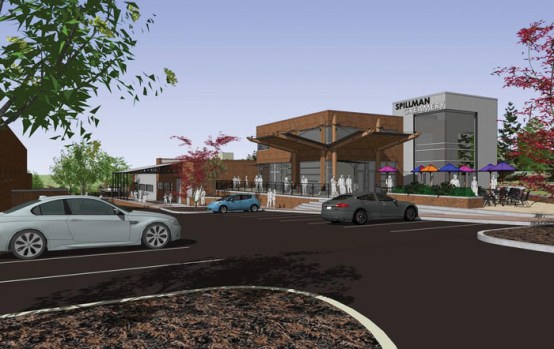 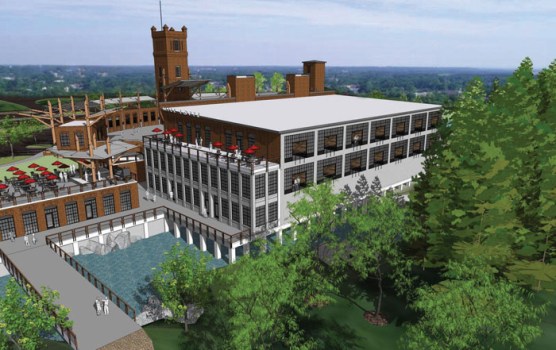 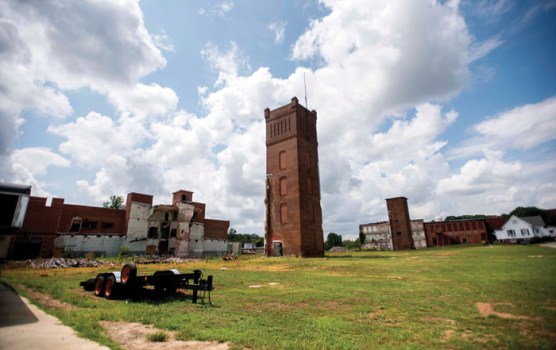 Three towers that remain from the old mill site will be the centerpiece of a proposed music venue in Cooleemee. Jon C. Lakey/Salisbury Post

COOLEEMEE – Some exciting plans are in the works for this former mill town on the Davie-Rowan county line.

Breck Bullock of Bullock Development Properties LLC and Cooleemee Partners LLC purchased Erwin Mills Plant No. 3 in 2015 for $600,000, according to the Davie County Register of Deeds Office. Bullock is working on plans for an antiques mall, microbrewery, outdoor flea market and a 2,000-seat amphitheater for concerts. He is also the owner of South Yadkin Power, which generates power from the Yadkin River behind the mill.

Davie County Manager John Eller and Terry Bralley, president of the Davie County Economic Development Commission, said they are pleased to be working with Bullock, Roger Spillman, Cooleemee Finance Officer Stephen Corriher and Cooleemee town board members on plans for the mill property.

Spillman, a Cooleemee businessman and developer, has agreed to sign over the right of way to property he owns near the site so the plans can move forward.

“I’m on board with it,” Spillman said. “Anything to help the town, and they definitely think it will help the town and the county.”

Spillman said developers have a five-year option to complete the project.

As news of the plans spread to townspeople, so does the excitement. Corriher said residents are thrilled that growth they’ve always wanted appears to be coming to fruition.

John Chandler, who is retired as the town’s finance officer, said he had always seen great potential for Cooleemee. In fact, Chandler said he began to pray for his hometown when he and his wife, Regina, and their family bought a house and moved back in 1983 to be closer to his father.

Chandler’s sister, KC Smith, who serves on the Cooleemee town board, said she and her husband were living in Lexington when she graduated from photography school in 2009 and began visiting her sister, Trish, and their brother, John, and his family on a regular basis.

“My heart would skip a beat when I drove into town,” she said, “and I realized how homesick I was.”

Even then, Smith said, “I just knew that something good was going to happen here, and I wanted to be a part of it. I wanted to do everything I could do to help the town.”

Smith, who writes about Cooleemee news and residents as a correspondent for the Davie County Enterprise-Record in Mocksville, said she believes Bullock’s plans validate her earlier feelings about something special ready to happen.

Eller said Mocksville architect John Fuller has completed a rendering of plans for the mill property.

With people coming from all over to Riverpark at Cooleemee Falls — known to most locals as the Bull Hole — Eller said projects planned for the mill property “have the potential to make the town a thriving tourist attraction.”

Jeannie Taylor, a town commissioner, said she thinks the plans for the mill are wonderful.

“I’m very excited about it,” Taylor said. “Some people are sorry that they tore the mill down. I’ve even heard it said that they tore our history down, but I don’t see it that way at all.

“I feel like my mama and daddy (both of them worked at the mill) would be standing in the mill parking lot cheering about this.”

Bralley said a group from the University of North Carolina at Chapel Hill did a feasibility study on the project. The cost of the study was $40,000.

“As the project moves forward,” Bralley said, “we’re throwing ideas out trying to attract more investors into the area and ‘build the dream,’ so to speak.”

Bralley said he, Eller and others involved in the project also looked at the possibility of a state park in Cooleemee along with other ideas to bring growth to the town.

Bullock said he is still working on plans for the mill project, including outfitters like the ones in Fontana.

“In the facility at some place, possibly one of the warehouses, they’re talking about doing like they do in Fontana, taking people downstream, putting them in canoes, kayaks,” Bullock said. “They would come down from the junction to the dam and then trolley them down from the entry point here. And that way, they’d go through the site and get to shop and stuff if they want. And then they’ll put them back into the river past the facility and go another mile or something downriver.”

Bullock said plans call for a bridge where Old Main Street used to cross between two of the mill buildings.

“There are columns still there, big beautiful rock masonry. This will be for bicycles or wheelchairs and will tie the Rowan part into the Davie part,” he said.

Benita Finney, who is serving her first term on the Davie County Board of Commissioners, said she is excited about the plans for Cooleemee. As a singer, Finney said, she has performed in most of the churches in the town. At one point, she said she even tried to get her husband to move to Cooleemee.

Finney is also the events coordinator for Riverpark at Cooleemee Falls. For the fourth annual rubber duck race, held this year on July 20, she said people from all over entered more than 1,000 rubber ducks to compete for money prizes.

Photographs of the race will be featured with a story in an edition of “Our State Magazine” next spring.

Editor’s note: This story was updated Friday at 1:43 p.m. Aug. 9 to state that Jeannie Taylor is a town commissioner. Jessica Almond was recently sworn in as mayor. We apologize for the error.