Two in a row at the World Series 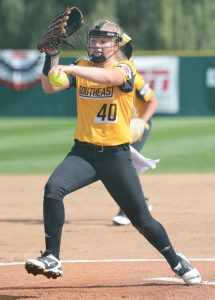 Campbell Schaen pitched well on Friday for the second straight game, striking out five batters  (with no walks) in three innings.

Carmen Freeze came on to pitch the final two innings. The game ended after five innings due to the 10-run mercy rule.

Rowan scored three runs in four of its five innings.

Rowan, now 2-0 in pool play, got off to a quick start against the Europe/Africa champions.  Lauren Vanderpool walked in the top of the first inning. Schaen followed with a single. Vanderpool scored on a passed ball, Avrelle Harrell’s groundout made it 2-0, and Rowan tacked on another run on an error.

Rowan made it 6-0 in the third when Riley Haggas walked and Dextraze and Ashley Yang singled to load the bases. Cline’s hit to center field scored all the baserunners.

Rowan kept it rolling with three more runs in the fourth. Haggas and Dextraze had run-scoring singles in the inning.

Schaen and Haggas had RBIs in the fifth.

Italy (0-2) managed to score single runs in the fourth and fifth.

With two wins, Rowan is assured of being one of the four teams from its five-team pool that will advance to Monday’s quarterfinals. Getting the No. 1 seed from the pool is the main goal now.

In other games on Saturday, Mexico won its second straight outing with a 13-5 pounding of Iowa and Hawaii moved to 3-0 with a 7-0 victory against Philippines.

Oregon carried a 2-0 record into a late Friday game against Louisiana (1-1).