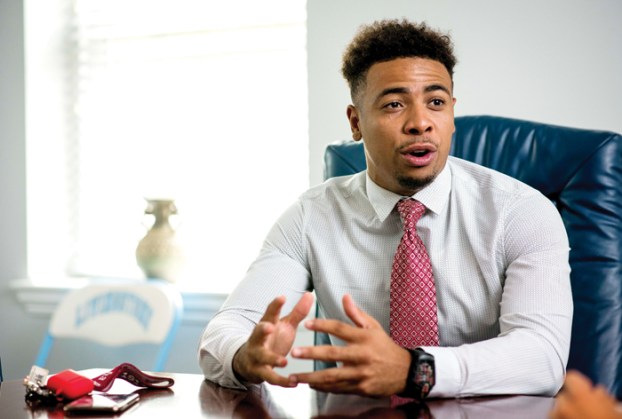 ‘I’m going to keep trying’: Jalon Lewis continues his own story with basketball at ESPN U internship

SALISBURY — Jalon Lewis, a senior at Livingstone College, put in daily four- and five-hour workouts last summer as he prepared for the upcoming basketball season. Nonetheless, the beginning of the season didn’t go how he wanted it to, as he dealt with personal losses along with a rough time on the court.

Lewis went to the CIAA tournament anyway and did an interview with the media with the encouragement of his coach, James Stinson. Someone at the tournament was impressed both by his interview and his ambition to play overseas before pursuing a career as a sports color analyst for ESPN.

That person recommended Lewis apply for an ESPN U internship in Charlotte. Lewis took the advice and got the gig. 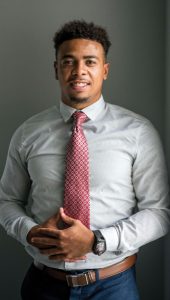 That helped lead him to becoming the Mister of Livingstone, a role given at many historically black college and universities in which a student represents his college. He also joined a fraternity, Kappa Alpha Psi, last spring.

“It happened in one month,” he said. “And man, it just changed my life, being able to know that God can change any situation, anything that you go through.”

The day-to-day of Lewis’ internship in Charlotte this summer has included work with sports rankings and statistics, as well as keeping up with student athletes on social media.

“It’s really just being an eye for each university,” Lewis explained.

He was also able to meet with players, coaches and sports analysts.

One highlight was meeting Shannon Sharpe, a former NFL player who co-hosts “Skip and Shannon: Undisputed With Skip Bayless.” Smith found that he and Sharpe had a lot to talk about, as Sharpe knew about Livingstone and also attended a historically black college.

With all the people he met, Lewis tried to find a way to relate to them and find their story.

“To see people evolve and become that better person and better athlete is just beautiful to me,” he said. “I want to know that part, the process of what they had to go through to get to where they are now. Because I deal with the same thing.”

If Lewis’ own experiences with basketball are also a story, then he’s right in the middle of it.

He started playing the sport when he was 3. As a rising senior, he has experienced the ups and downs that come with the game.

Lewis was a top player at his high school before breaking his ankle twice, only to come back to be a part of getting to the final four in the state tournament of Ohio, a first for his high school.

He went to Snow College in Utah for a year before transferring to Livingstone, where he thinks his story arc is similar to what it was in high school.

“It’s never a smooth road being a student athlete. So being able to know that and actually experience that, I know certain questions to ask,” Lewis said about his internship. “I know to ask them, ‘How did you get through this?'”

Student athletes have the pressure of the sport on top of their academic work. For some, the scholarship that they get for playing is also paramount because it’s their main source to pay for school.

Lewis himself has struggled with balancing school and basketball, recovering from injuries and overcoming his own doubts about his abilities.

But he says that God, his parents and his coaches have helped him grow.

“I think God is trying to make sure I’m staying humbled, making sure that I’m not doing this for me but doing this for him,” Lewis said. “So to see him changing everything right now off the court that I never thought I would be able to do, it’s just something that really opened my eyes.”

Lately, Lewis has been busy getting ready for the upcoming season, interning at ESPN U and fulfilling his duties as the Mister of Livingstone. He recently attended the Kings and Queens Conference, an annual HBCU leadership conference, where he was nominated for several awards including the most impressive “king” nationally.

Although Lewis joked that he doesn’t think his knees will allow him to play basketball forever, he hopes to be a sports analyst and stay connected to sports, and the story within the game, in that way.

“I want to be a part of something good,” Lewis said. “I want to help the future, the kids that are coming up under me. My little brothers and sisters need to be able to see a role model, somebody that did something not just on their own but who’s out there on their own able to persevere.”

Although basketball is Lewis’ favorite sport, he has enjoyed learning about other sports at ESPN U. Lacrosse was alien to him at the beginning of the summer, but he threw a ball from a lacrosse stick for the first time last week.

By Kathy Chaffin For the Salisbury Post COOLEEMEE – Some exciting plans are in the works for this former mill... read more