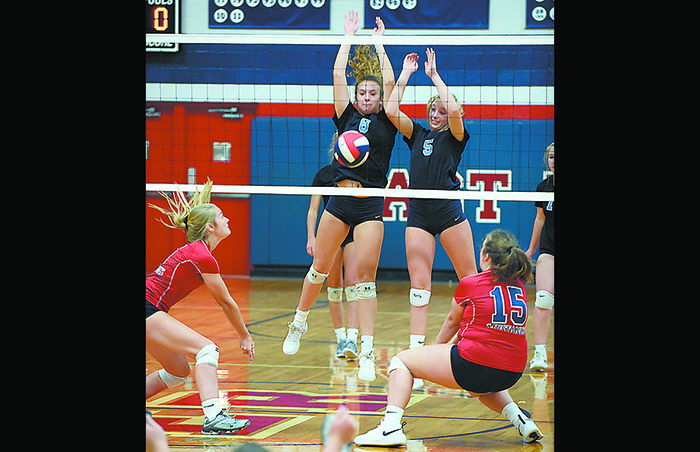 East Rowan's Olivia Schumacher (4) and Zoe Larson (15) attempt to save ball off the net during a match last season against West Rowan. Carly Stiller (8) and KK Dowling (5) of West look on. Photo by Wayne Hinshaw, for the Salisbury Post

Playoffs: Lost first round of 3A playoffs to Marvin Ridge

GRANITE QUARRY —Coach Sandy Robertson Lytton, a retired teacher, leads East Rowan into what will be another challenging season in the North Piedmont Conference.

This is the Mars Hill graduate’s second time around with the Mustangs. She had considerable success coaching East volleyball in the mid-1990s. Her 1994 Mustangs won the South Piedmont Conference and also took two playoff games to reach the final eight in 3A.

East was once a consistent winner in volleyball and has made the state playoffs 18 times over the years, including last season’s trip as the No. 32 seed in a 32-team West bracket.

East has won seven playoff matches in its history and boasted a winning team as recently as 2015 when captains Jordan McCall, Brittany Small and Avery Wright led a 14-10 club that won 10 SPC games and prevailed six times against county opponents.

But it’s a different atmosphere now. East has become an underdog. East hasn’t won a conference game since Oct. 11, 2016, when it was still a member of the SPC. Struggling in the loaded NPC with Carson, West Rowan and three good Iredell programs the last two seasons, East has gone 0-20 in league play.

“We’re not a bad team, not at all,” Lytton said. “But we are in a tough conference with state-championship contenders. The biggest thing for our girls is believing they can do it. If we believe in ourselves and trust our abilities, we can upset some of those teams.”

East’s top two players from last season graduated. Olivia Wright was, by far, East’s leader in kills, while libero Baleigh Hill, a Barton signee, was tremendous in the areas of serve-receive and digs.

But it’s not a hopeless situation for the Mustangs. East has seven girls back who played quite a bit. Lytton also welcomes a huge group of freshmen that includes building blocks for a turnaround. Leah Hinceman, Elly Davis and Riley Hill (Baleigh’s sister) made the varsity team. They are experienced club players, so they aren’t going to be wide-eyed freshmen.

“Landrie has really improved her hitting,” Lytton said. “Audrey is an incredible back-row player and a very good server. Schumacher is a good all-round athlete and can do a lot of different things.”

“Emma is a smart hitter and sees the court well,” Lytton said.

The Larsons are half of a set of quadruplets. Zoe is a proficient setter, while Hannah was one of East’s top hitters last season.

Moore and Tucker didn’t have a lot of stats in 2018, but they are High Rock club players, and they’ll help.

Lytton likes what she’s seen from her team in workouts, and the freshmen can change the talent level for the Mustangs. Hinceman provides much-needed size and athleticism. Against teams like West Rowan, East was not only out-sized last season, it was seriously out-verticaled.

“I think we’re deeper and more skilled than we were a year ago,” Lytton said. “We should have better execution and more control.”

All of East’s wins last seasons came against Cabarrus schools — two against Concord and one each against A.L. Brown, Central Cabarrus and Northwest Cabarrus.

Whether East can break through against one — or more — of its NPC opponents this season remains to be seen, but there’s reason for optimism.

East opens at home against South Rowan on Aug. 19.

East’s first NPC matchup is at home against West Rowan on Sept. 17.