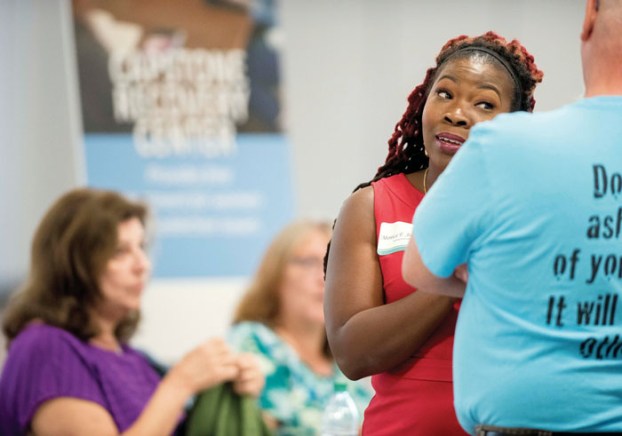 Monica Johnson, a member engagement specialist with Cardinal Innovation Health, who was one of the panelist in the discussion on treatment and recovery support, speaks to an audience member at the third annual Rowan County Substance Use Forum on Thursday at West End Plaza. Jon C. Lakey/Salisbury Post

SALISBURY — Ashley Creek has dealt with traumatic experiences for much of her life. Both of her parents died at the hands of addiction, and she also battled addiction.

Today, she’s come out on the other side, much because of her faith and her community support system.

Creek, a peer support specialist with the Rowan County Health Department, was among a group of panelists at a Rowan County substance use forum Thursday night.

The forum, held at West End Plaza. was the third one since 2017. It focused on caring for pregnant women suffering with opioid use disorder and provided research into the issues that affect them and how the community can support her through treatment and programs.

Dr. Hendree Jones, with the UNC Horizons program, discussed some startling statistics that revealed that from 1999 to 2017, the death rate from drug overdoses among women 30 to 64 increased by 260%.

Jones also said that in many cases, health care professionals tend to miss the signs of addiction in women — especially older women and young girls.

In addition, compared to men, women are more likely to report chronic pain; be prescribed pain relievers; be given higher doses; use them for longer periods; have a shortened duration between opioid use initiation and seeking help for an opioid use disorder; and to be less likely to receive Naloxone for an overdose.

Jones spoke extensively about neonatal abstinence syndrome. She said newborns can’t be born addicted. They lack the life experience and life duration to meet the definition of addiction, which is a brain illness whose visible signs are behaviors.

Creek said her addiction was a learned habit, one that she felt was caused by trauma.

“It was an active choice,” she said from the panel.

Creek said she was in pain and chose to treat that pain through substance use.

The panelists all said one of the issues that prevents substance abusers from seeking treatment is the stigma of addiction.

Jennifer Payne said mothers who arrive at the hospital are mostly embarrassed and feel as though they will be judged when a drug screening reveals positive results for opioids.

“It’s sometimes in how they were treated,” Monica Johnson said.

She added that oftentimes, people go out the door and never go back for help.

Creek said she was a functional addict for years and a huge barrier for her was placing her life in the hands of others.

Dr. Jones said it’s important that the community work to end the stigma of addiction.

A number of local and regional leaders, representatives and advocates were on hand at the forum.

Mayor Al Heggins said she attended because “every city and town in this county has to be actively involved in saving and improving lives.”

She added that she applauded the county commissioners and staff for continuing to build public knowledge and address substance use.

Jones said there more than 130 people who signed up, and she really appreciated the community support for the forum.

SALISBURY — What if Rowan had the best performing economy among counties in the state? What if it was growing... read more