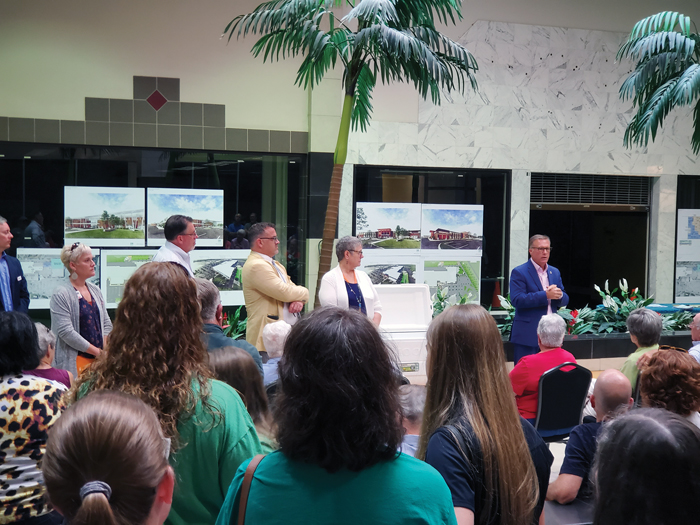 County Commissioners Chairman Greg Edds (right) speaks to the large crowd of people who turned out for a meeting about building an agricultural center at West End Plaza. Commissioners were seeking input on two different versions of the idea. Josh Bergeron/Salisbury Post

Rowan County commissioners may need to put their sales hats on as they move closer to voting on a proposal that would turn a portion of West End Plaza into an agricultural center.

And they should enlist Amy Lynn Albertson, Rowan County Cooperative Extension director, to help with the sales job.

On Monday night, commissioners were joined by a crowd of dozens at an open house intended to gather input on an idea to create an events center and office space and to relocate local agricultural agencies, including Cooperative Extension, to the former mall.

They showed up with an alternative design to one presented previously. The new design was a more attractive take on the agricultural center idea, said Commissioners Chairman Greg Edds. It was a “craftsman” design, Edds told the crowd.

Initially, it appeared that commissioners intended for the public only to look at the images and decide which ones looked more attractive, but members of the crowd quickly asked, “What’s the cost?”

And others cautioned commissioners against building a “Taj Mahal West,” a reference to the increase in price that accompanied the downtown Rowan-Salisbury Schools central office building. A donation from the Wallace family was required to ensure a decorative dome topped the building.

To price questions, commissioners and staff members initially hesitated before stating that they only had estimates for the prior option that had been presented to commissioners — $18.93 million — the one Edds called less attractive. The second option was a quickly created rendition that lacked cost estimates.

Monday’s meeting may be a preview of opinions across the county as commissioners continue to discuss the idea. Rowan is a conservative county, and that means residents will be skeptical of expensive projects paid for with tax dollars. The county has debt capacity for a $15 million project, County Manager Aaron Church said, but it also has committed to provide tens of millions of dollars to Rowan-Salisbury Schools in upcoming years for capital improvements. That much of West End Plaza has remained unused since its 2013 purchase by county government will not change skepticism about the project’s necessity.

Rowan is technically considered an urban county, but local agriculture represents tens of millions of dollars in economic productivity. Our county’s strawberry and tomato production rank it among the top producers in the state. And there’s a case to be made that a new facility will be beneficial to local agriculture through seminars hosted by the Piedmont Research Station, Cooperative Extension and regional producer meetings.

That’s why, if commissioners intend to move forward with a plan, Albertson will be vital.

“We see so much opportunity here to really build our community and to make this place a beautiful place,” Albertson said after Monday’s meeting.

And she may be the best salesperson for the project.