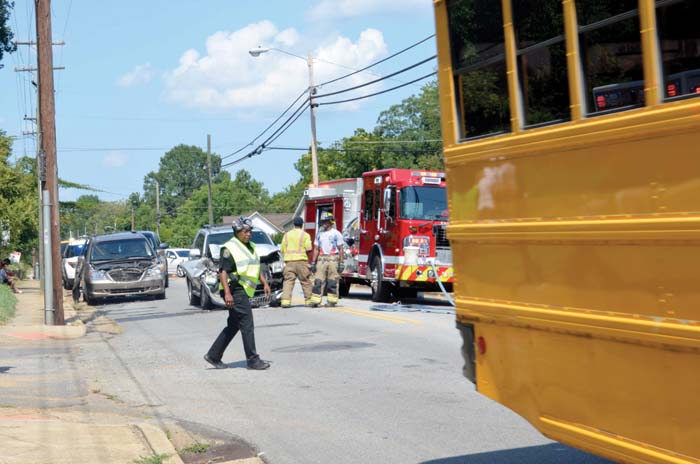 East Spencer police responded to a Wednesday afternoon school bus accident where 22 North Rowan Middle School students were onboard. Some students had complaintas and were checked out by Rowan EMS at the scene. The three-vehicle collision occurred at South Long Street and Isenhour Street near Meridian Brick Company and Staclean. Shavonne Walker/Salisbury Post

EAST SPENCER — Two vehicles collided into the back of a Rowan-Salisbury Schools bus Wednesday afternoon at the intersection of South Long and Isenhour streets.

The East Spencer Police Department said Pedro A. Vaquis Funez, 54, of East Spencer, was driving too fast to slow down when his Honda Odyssey rammed the back of a Mercury Mariner sport utility vehicle.

The SUV was pushed into a school bus carrying 22 North Rowan Middle School students. A few students had complaints and were checked twice by a Rowan EMS crew at the scene.

The bus was not damaged and continued on its route, said schools spokeswoman Rita Foil.

East Spencer police cited Funez for failure to reduce speed, displaying a fictitious tag and having no operator’s license.

The SUV driver was taken by ambulance to the hospital as a precaution.

A second bus is customarily sent to the scene of a crash, but it was not needed in this case, authorities said. School officials notified the parents of the students on the bus, Foil said.