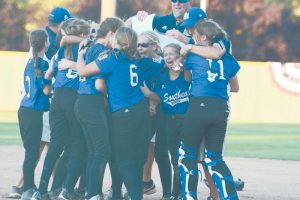 SALISBURY – On this date four years ago, most folks in Rowan County had never heard of Little League girls softball.

People asked: “How can Little League have softball games … isn’t that baseball?”

Rowan Little League’s terrific team of 13 girls, ages 11 and 12, under the guidance of coaches Steve Yang, Rob Hales and Eric Dowling, won the World Series championship in Portland, Ore. And we all watched it on Aug. 19, 2015 — live on ESPN.

But winning the title was only part of the story. The county truly embraced the team and its achievement. There was a mob scene at West End Plaza when the bus rolled in, late on a Friday night, welcoming the heroes back home.

The next day, a parade moved through downtown Salisbury, each little girl and coach in their own beautiful convertible. The parade ended at Rowan Community Park, with hundreds cheering throughout an elaborate program of speakers, boasting the great feat.

The common phrase was “these girls have become rock stars.” And it was true. The team was lauded throughout the next few months — at football game halftimes, baseball games, parades, city council and county commission meetings, and more. The champs were honored with an official NC DOT sign at the county line on I-85.

After things finally calmed down, the same coaching staff took the 2016 team back to Portland. That time, and again in 2017 under new coaches, Rowan was the runner-up. Last year’s team failed to win the Southeast Regional in Georgia, but now Yang is back and Rowan is in Portland, seeking another championship.

While Yang and his new assistants (Josh Schaen and Chris Evans) are in Oregon with a new group of 11- and 12-year-old girls, our 2015 champions are now high school juniors and seniors, all of them still sports standouts. They’ve traded those Southeast LL shirts for high school jerseys. Childish interests have been replaced by driver’s licenses, boyfriends and thoughts of college.

Yes, they are teenagers now, but for sure, they remember being “rock stars.” And while winning the title was great, the girls and coaches speak more about the bond they formed that summer.

“Not so much the softball part, but the talks in the hotels, the bus rides to the games, the meals together — that was the fun times,” remembers Allison Ennis, the shortstop on the team. “The games, of course, were fun, but it was the stuff in between that made it all come together and made it a really great summer.”

The Mooresville girls blended in nicely and it’s easy to speculate that there would not have been a championship without ace pitcher Morton in the circle.

“The Mooresville girls that came, we didn’t really know them that much, but that one summer turned us into a family,” continued Ennis. “We were best friends by the end of that summer. And we played so well together — our chemistry was so good. We just knew what each of us was going to do before we did it.”

Morton, now a senior at Mooresville High, and committed to a softball scholarship in 2020 at Erskine College, still deflects the credit of being the key figure on that 2015 team. But history shows that she was awesome in both the regional and World Series.

“To be honest, it feels like such a long time ago, even though it’s just four years,” Morton said. “But I remember it being such a team effort. Everyone did their jobs. I remember feeling really comfortable on the mound, not nervous, because everyone was behind me and doing their jobs. Everything was perfect … it seems like all of our games went perfect.

“It was special,” added Morton. “We’re all still in touch. We’re all really close because we see each other when we play against each other in high school games, too, so it’s kind of like we never left each other. But back then, staying together for so long in hotels, in Georgia and Portland, we were all so close that by the end of it, we kinda didn’t want to leave or go home.”

Coach Yang, who also rejected praise four years ago, with the now famous “I’m just a dentist” quote, says that the team’s feat of winning the World Series remains big because it was the first and so far, the only group to do it.

“The teams in ‘16, ‘17 and even ‘18 didn’t win it, and that makes what the 2015 team did even more special,” Yang said Sunday, before leaving for Portland. “Those other teams may have even been more talented, but the the bond that those first girls had, and their will to win, may have pushed the 2015 team to the finish line.

“I remember just how awe struck they were when we first got to Portland, their faces, so innocent and naive,” added Yang. “We had some much fun with that group of girls. To this day, it’s still amazing to me how all that happened four years ago. Those 13 girls, who I still keep very close to my heart and when I see them, they all give me a hug and we talk and catch up. I’m ecstatic now to see how successful they’ve become, both on the field and academically. And you’ll see a lot of these girls playing either softball or volleyball at the college level.”

He’s right about that.

Almost all 13 girls from that team have earned all-county honors, respectively, in at least one sport. Hales and Dowling are all-county in softball and volleyball. Hales also plays basketball at Carson. Walton was the Rowan County Softball Player of the Year last spring. Morton set the season strikeout record for Mooresville in May with 172 and led the Blue Devils to the state 4A semifinals.

While they won the World Series in 2015, the team did not go undefeated.  After an opening-game, 10-1 win over Canada, Rowan actually lost to Iowa, 3-1, in pool play, nearly costing itself a chance to move on. A controversial decision by the Washington state team to manipulate tie-breaking procedures backfired on the West team and aided Rowan.

“The three best teams were all in our pool,” recalls Yang. “We were close to not making bracket play, but then all that happened with those other teams. But once we got in, it was like, ‘here we go, we can win this thing.’”

Rowan defeated the Texas team in the semifinals, 8-0, the first game on ESPN. That really cranked up the local enthusiasm, and watch parties were set up in homes and restaurants for the next night’s championship game, also on national TV.

In the title game, Rowan scored all its runs in the first inning and behind Morton’s four-hitter, edged the squad from Warwick, Rhode Island, 4-2.

Ennis had three hits in the title game, while Yang and Morton drove in the first-inning runs.

“I remember Kary catching the ball and throwing it up in the air,” Dowling said, recently. “Everybody started crying — tears of joy — and we were so excited. It’s one of the best memories of my life thus far. I’ll always remember it and cherish it.”

Little did the girls know what was awaiting their arrival in Salisbury. Yang was even surprised.

“We were sitting at the airport the day after we won it, about to fly home, and I’m getting messages from (Rowan Little League official) Dan Wales and others, including (county commissioner) Greg Edds,” remembers Yang. “They wanted to do a parade on Saturday, and I said, ‘ah, don’t worry about that. Just put us in the Holiday Caravan, that would be nice.’ But they were like, ‘no, no, no … this is going to happen. The city and county are behind this, so get ready.’ In my wildest dreams, did I think it would have that kind of impact in our community? That parade was so well attended, it was beyond my imagination. We all remember it like it was yesterday.”

Of course, the girls remember it too.

“It was really overwhelming when we returned,” Morton said, thinking back. “I didn’t really think many people watched it on TV, but they must have. We didn’t know it was going to be that big of a deal, but it was. We were just kind of, ‘wow.’”

“We never dreamed the reception back home would be so big,” added Ennis. “It was crazy. At the beginning of the summer, we had no idea that the end of it was going to be like that. And when we went back to school the next week, all of our friends were saying, ‘we saw you on TV!’ We were really still in shock about all of it. It took a while to come back down to reality because we were being celebrated up until Christmas, it seems. It eventually sunk in, that ‘hey, we really did this.’”

Yes, they really did.

2015 LITTLE LEAGUE CHAMPIONS — WHAT THEY’RE UP TO

KK Dowling, junior at West Rowan, All-County in both volleyball and softball

Kary Hales, junior at Carson, All-County in both softball and volleyball, plays basketball

Taylor Walton, junior at West Rowan, All-County and Player of the Year in softball

Ellie Wilhelm, junior at Carson, starter in both basketball and softball