Martin’s 2-out, 2-run single in 9th, and Dodgers walkoff again 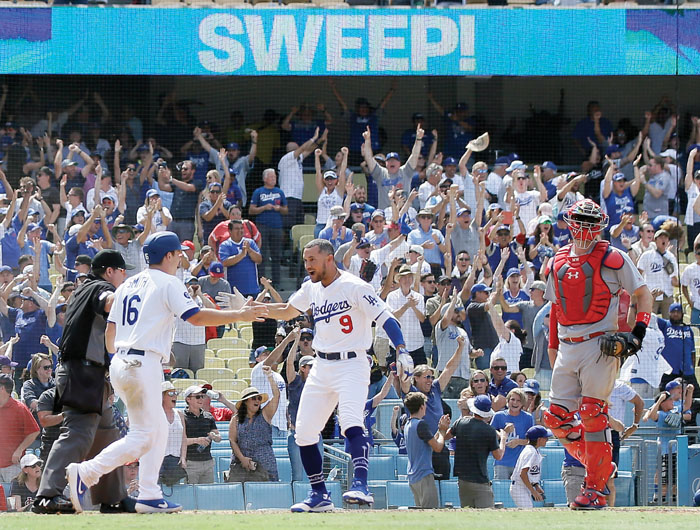 LOS ANGELES (AP) — As the Los Angeles Dodgers’ oldest player, Russell Martin figures he has an extra appreciation for this club’s remarkable string of impossibly dramatic victories at Chavez Ravine.

When the veteran backup catcher got a chance to contribute to this season of walk-off wonders, he didn’t waste it.

“Let the old guys get hot too, you know?” Martin said with a grin.

Martin drove a two-run, two-out single up the middle for the Dodgers’ 10th walk-off win of the season, and Los Angeles swept the St. Louis Cardinals with a 2-1 victory Wednesday.

The 36-year-old Martin delivered after a frustrating offensive day for the Dodgers, who have won five straight despite the best efforts of Jack Flaherty. Los Angeles couldn’t score during seven brilliant innings of four-hit ball by the Cardinals starter in his hometown ballpark, but the Dodgers still came through against St. Louis’ bullpen.

Andrew Miller hit Corey Seager with a pitch with one out in the ninth, and Carlos Martinez (2-2) gave up pinch-hitter Will Smith’s single. After Martinez threw a wild pitch to move up both runners, Martin bounced a two-strike single through the middle, and Smith sprinted home with the winning run.

“You just shorten up your swing, try to touch the ball, and let destiny happen,” Martin said.

Martin hadn’t had a walk-off hit since May 2016 in Toronto, and he hadn’t delivered a walk-off hit for the Dodgers since April 2007. He’s batting .219 this season, but he still helped Los Angeles post its major league-high 77th win.

Casey Sadler (2-0) pitched the ninth for Los Angeles, which avoided its first shutout loss since May 18 with its final swing.

NEW YORK (AP) — The New York Mets are convinced their earlier struggles have made them stronger for the stretch.

The Mets took another early lead and posted their sixth straight victory, winning for the 13th time in 14 games. New York has swept the last-place Marlins three times this season.

They sat a season-high 11 games under .500 after dropping their first following the All-Star Game, but the Mets (59-56) have won at a torrid pace and own a major league-best 19-6 record since the break.

“We’re trying to accomplish something as a team together that can be very special and then the things that we’ve gone through, some rough patches, have only brought us closer together,” manager Mickey Callaway said.

Matz worked at a quick and easy pace, allowing two runs on seven hits and two walks over 6 2/3 innings, striking out seven. He is 5-0 with an 2.14 ERA in 10 starts at home this year.

“I think it’s a testament to the whole team,” he said. “Even though when we went through a bad stretch there for a little while, everybody kept their heads down and kept working and it’s paying off right now.”

Following a four-pitch walk to Conforto in the first inning, Alonso homered for the third straight game, connecting off Jordan Yamamoto (4-3) for his 37th home run. The rookie’s homer marked the seventh straight time the Mets have scored in the first, something they haven’t done since 2010.

“We’ve been hitting well, our defense has been awesome and our pitching’s been lights out,” Alonso said. “So I think that’s going to be a really tough combo for our opponents to handle and we just need to keep rolling and take it day by day.”

Matz reached on a leadoff single in the third and scored on Conforto’s 24th homer and 100th of his career, a first-pitch shot that hooked just inside the right field foul pole to give New York a 4-1 lead. Conforto has homered seven times in his last 11 games.

“To be able to do it here at home was pretty awesome,” Conforto said of the milestone, which made him the 14th player in franchise history to hit 100 homers in a Mets uniform. “Hopefully I hit a lot more but today was special.”

“We’re stacking good at-bats on top of each other,” Conforto said. “I think we’ve just kind of rallied around each other in the second half here.”

Lewis Brinson put Miami on the board with an RBI single in the second. Brian Anderson added a solo homer in the sixth, his 18th.

Members of the Mets relief corps presented Conforto with a damaged baseball, trying to pass it off as the one hit for his milestone home run. The seams were significantly frayed on the inscribed ball, giving the appearance that it had been chewed up by a dog.

“This is a joke that the bullpen thought would be funny, to say this was my home run ball,” he said, gripping the phony keepsake. “As you can see we’re still having fun out here.”

Conforto noted that the actual ball had been retrieved and was in much better condition.

Marlins: SS Miguel Rojas was placed on the 10-day injured list prior to the game with a strained right hamstring. He was injured Tuesday night, stumbling over first base while trying to avoid a double play.

Mets: C Wilson Ramos was behind the plate for all nine innings despite a noon start following a night game. Callaway cited Ramos’ preparation and strong desire to play as reasons, along with an off day Thursday.