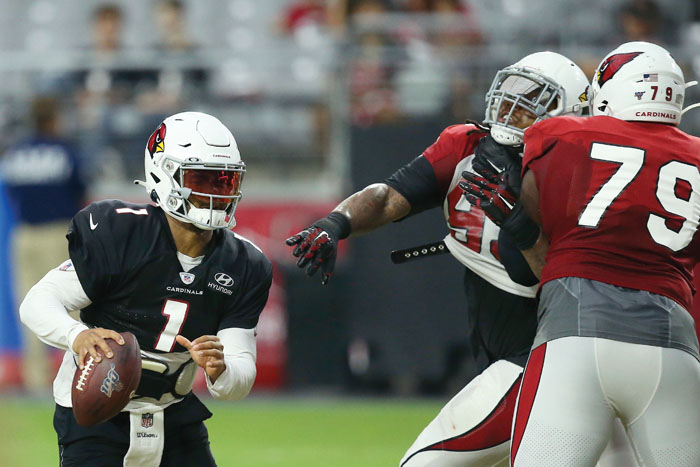 Hey, Kyler, this is for real.

Kyler Murray, April’s top overall draft pick, will make his preseason debut for Arizona on Thursday night when the Cardinals host the Chargers.

The quarterback won’t be on the field very long against Los Angeles, but he should get a chance to show some of the skills that so enamored the Cardinals. He also could wind up on the ground a few times — for the first time as a pro considering QBs don’t get hit in practice.

“I’m looking forward to having fun,” Murray says. “It’s going to be different suiting up in a Cardinals jersey. Not playing for a school, you’re representing a state.”

That state saw its team have the worst record in the NFL in 2018, fire coach Steve Wilks and hire Kliff Kingsbury, an offensive guru who had recently been fired as head coach at Texas Tech.

“To be kind of pushed in as the guy, there’s no kind of grace period of leading him in with any veteran presence at that position,” Kingsbury said. “He’s remained humble. He’s remained diligent in his work habits, so I’ve been proud of that for him.”

With running back Melvin Gordon’s holdout, Austin Ekeler and Justin Jackson will get plenty of carries for the Chargers. Defensive tackle and first-round pick Jerry Tillery has gotten some time with the first team.

There are 11 games on the first full night of preseason play; the Broncos beat the Falcons last week in the Hall of Fame game.

Former Patriots with injuries are of interest here.

Trey Flowers, the defensive end who went from New England to Detroit as a free agent and was the Lions’ big offseason acquisition, is on the physically unable to perform list.

Coach Matt Patricia, a former defensive assistant for the Patriots in his second season with Detroit, has been recovering from a surgically repaired left leg that’s caused him to move around the practice facility on a vehicle.

If Eagles QB Carson Wentz plays, it’ll be his first action since a back injury ended his season early for the second straight year and forced him to watch Nick Foles lead the team to a playoff victory in his absence. Foles, the Super Bowl MVP two years ago, is gone now and Nate Sudfeld is trying to solidify the backup spot.

First-round quarterback Dwayne Haskins is expected to make his Redskins debut. The 15th overall pick out of Ohio State is competing with veterans Case Keenum and Colt McCoy for the starting job. Haskins has flashed a strong arm, but made a lot of rookie mistakes in camp.

“We’ll see how he does in a game,” coach Jay Gruden said. “We’ll see how he’s taken what he’s done on the practice field to see how it transitions into a real game situation. And how he handles the huddles and cadence, anticipation, accuracy — all that good stuff.”

There’s much anticipation about Cleveland — QB Baker Mayfield, new WR Odell Beckham Jr., Myles Garrett — but it’s unlikely any will play much if at all. Garrett missed two days of practice with an unspecified injury.

Adam Gase gets started as Jets head coach. He was hired in January after New York fired Todd Bowles after four seasons without making the playoffs. He isn’t likely to use prized addition running back Le’Veon Bell.

Gregg Williams’ defense will also be on display for the first time with new inside linebacker C.J. Mosley and first-round pick Quinnen Williams, who has looked good in camp on the D-line.

“I’m very excited,” he says. “I’m excited to see all the hard work we’ve put in from April 1 until now, to go out and try to perform and execute at a good level.”

One player to watch: Preston Williams, an undrafted receiver out of Colorado State, who has been the most impressive rookie for the Dolphins in camp.

Though Buffalo’s new-look offensive line has been beset by injuries, the Bills will get their first glimpse at a retooled offense featuring receivers John Brown and Cole Beasley. Center Mitch Morse (concussion) missed the past 10 days. Tackle LaAdrian Waddle will miss the season after tearing his right quadriceps on Sunday.

With Andrew Luck out and Jacoby Brissett taking limited snaps, Bills fans might get to watch Chad Kelly try to resuscitate his QB career. The nephew of Hall of Famer Jim Kelly signed with the Colts in May, but has had an uneven camp.

The Ravens are expected to use quarterback Lamar Jackson briefly to see how he handles first-year offensive coordinator Greg Roman’s revamped playbook. It will also mark the debut of former Penn State quarterback Trace McSorley, who will see extended time because backup Robert Griffin III is out with a broken right thumb.

Panthers star linebacker Luke Kuechly has no qualms about playing in exhibition games. Kuechly returned to full practice this week after missing time last week, noting he got hit on the side during practice, but added that “everything is fine.” The seven-year NFL veteran jokes playing in the preseason “it helps me remember how to play football.”

“You can’t tackle people out here (at practice) and there is a big difference between running by a guy and tagging off and actually tackling someone,” Kuechly says.

With very few position battles, the Bears have one goal in the preseason opener: find a kicker. Elliott Fry and Eddy Pineiro will see their first game action in pursuit of the job Cody Parkey had last year.

Coach Bill O’Brien said that many Texans starters should get some playing time, though it’s unlikely star defensive end J.J. Watt will be one of them. Watt left a joint practice with Green Bay early on Monday after experiencing tightness in his groin and sat out Tuesday as a precaution.

Watt, who grew up a Packers fan, is disappointed he won’t get to play at Lambeau Field, but knows being careful this early in the preseason is more important than getting on the field.

“Groin tightened up just a little bit, so rather than try and push through it and try and do some damage to it, we just shut it down,” he said. “I’ve gotten smarter as I got older, so I started listening to the trainers a little bit more than just listening to my own brain.”

O’Brien said rookie Lonnie Johnson Jr. will play three days after causing a stir with a hard hit during the first joint practice on Monday. The cornerback hit Green Bay tight end Jace Sternberger on a pass over the middle, causing Sternberger’s helmet to pop off, and then taunted him. The incident upset several Packers and caused O’Brien to pull him from practice early on Monday and hold him out on Tuesday.

Seattle will get its first chance to see Geno Smith and Paxton Lynch in a game situation in the competition to back up Russell Wilson. Smith has been the better of the two overall during the first couple of weeks of training camp.

The Seahawks could see rookie wide receiver DK Metcalf in his first game action and get a better idea of what he can bring to Seattle’s offense.