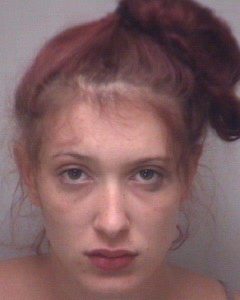 A Kannapolis woman was charged after allegedly leaving the scene of an accident and later taking police on a short foot chase.

Police also said she gave them a fake name.

Police said they received a phone call Tuesday morning about a hit and run near Jake Alexander Boulevard and Julian Road. A police sergeant located the vehicle in the 1300 block of Standish Street. The driver didn’t have a driver’s license, but admitted to causing a wreck. She gave the officer the name of “Jada,” a report said.

While en route to the police department, she slipped out of her handcuffs. When the officer opened the door, she ran, police said. The officer was able to catch up with her a short time later near North Long and Kerr streets. When she was booked into the jail, a deputy recognized her as someone who’d been arrested a some weeks ago and knew her name.

She has since been released from the Rowan County Detention Center under a $5,000 secured bond.