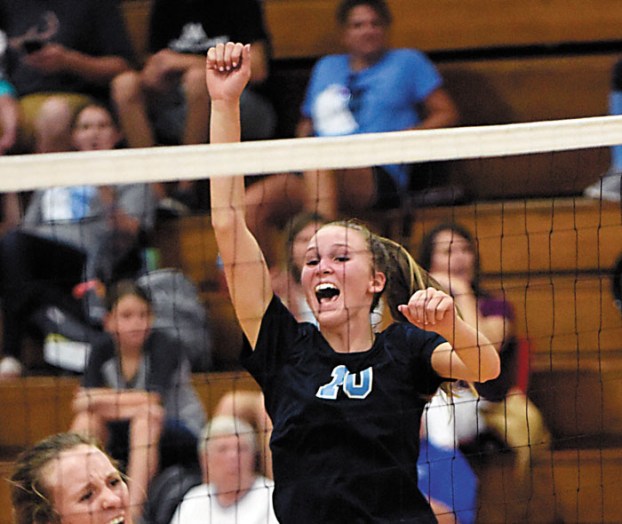 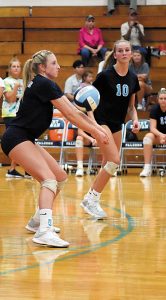 Wayne Hinshaw file photo/for the Salisbury Post … KK Dowling, left, shown in a match against Carson last season, is another All-County player returning for West Rowan this season. Looking on is Tori Hester (10).

MOUNT ULLA — West Rowan’s rise in volleyball has been a breath-taking sprint.

In 2015, Jan Dowling, long-time coach at South Rowan returned to West, the school from which she graduated before playing college volleyball at Western Carolina.

In 2018, West went 19-5, shared the NPC title with Carson and prevailed in two playoff matches. For the second straight season, West’s season-ending loss was to the eventual 3A state champion.

Three of the six playoff wins in the history of West’s program have come in 2017 and 2018.

West’s MaxPreps statewide ranking has risen steadily during Dowling’s tenure from No. 257 to No. 102 to No. 32 to No. 14. West finished last season ranked sixth in 3A.

So where do the Falcons go from here?

“We build on last season’s success,” Dowling said. “We move forward. We take it as far as we can go.”

Dowling is a demanding and dedicated coach who works as hard in the off-season as she does during it, but no one triumphs as often as West has done the last two seasons without players.

West has them. Four girls who received all-conference or all-county accolades — or both — return. So do two more seasoned players. When you throw in an exciting freshmen class, West has the opportunity to spend another autumn as one of the elite programs in the state,

At  a bouncy 5-foot-10, the Troy commit is a devastating outside hitter, but she also brings all the other elements of volleyball to the table. She’s an exceptional digger, blocker, server and passer.

“She hits it as hard as anyone and she’s also smart,” Dowling said. “She’s going to be even better as a senior. The difference is she’s communicating better, talking to her teammates more. She’ll be more of a vocal leader as a senior.”

Junior Kaylin “KK” Dowling, the coach’s daughter, shows signs of reaching a level similar to Hester’s. She was the county’s most improved player last season, jumping — literally — from freshman role player to sophomore star. A lefty with power and spring, she’ll be one of the top handful of players in the county.

“KK works at it hard and her skills are getting better,” Coach Dowling said. “She’s always in the weight room and she’s been to a lot of camps. This off-season, she’s taken lessons from someone other than her mom for the first time. She’s learned some things from another left-hander.”

Senior Carly Stiller, All-NPC last year, can be a 5-11 force in the middle. She had some big matches.

Junior Allison Ennis, who made the all-county team, will handle setting duties. Ennis suffered a wrist injury during softball season, but she’s getting close to 100 percent. Besides setting, she’s an asset defensively.

West also still has senior Emma Gusler, a strong right-side hitter, and 5-10 sophomore Kelcie Love, who played a lot on the varsity as a freshman. Love, the sister of UNC pitcher Austin Love, could be West’s breakout player this season.

“People forget Kelcie was only a freshman,” Coach Dowling said. “She’s got a big future.”

Freshman Brooke Kennerly is likely to take over the libero role that Hannah Pratt thrived in last season.

“She’s blown me away,” Coach Dowling said. “For a freshman, she’s been phenomenal. She’s a lot like (Carson libero) Kary Hales. It’s crazy how she can read the ball and she just doesn’t let balls hit the floor. If she misses one, she claps her hands and tells her teammates, ‘Hey, I’ve got the next one.'”

Freshman Ashlee Ennis, Allison’s younger sister, could be in the mix as a backup setter and defensive specialist.

The Falcons also have young hitters, but as long as Hester, Dowling, Gusler, Love and Stiller stay healthy, they’ll probably gain experience on the jayvee team. Coach Dowling employed a varsity roster of only eight last season and that worked out well.

While West obviously will be very good, winning the conference will be a challenge. Carson is Carson, and while the Cougars lost three all-county seniors, they’ll reload. North Iredell and South Iredell are exceptional programs, year in and year out. As good as NPC co-champs West and Carson were in 2018, South Iredell was able to split with West, while North Iredell was able to beat Carson once.  There were a lot of 3-2 matches, and there probably will be again. Statesville is never easy. East Rowan is determined to move up.

South Iredell finished fourth in the NPC last season, but was 10th in 3A in the final MaxPreps rankings. That tells you all you need to know about NPC volleyball.

“This year won’t be any different,” Dowling said. “Some of the top teams in the state will be in our conference. That’s why we’ve made our non-conference schedule just as tough as we can make it.”

West will compete in the Cox Mill Jamboree this Saturday and also will play in the “Best of the Carolinas” preseason tournament at Davidson College.

Then it will be time to try to build on two great seasons.

By Dennis Davidson dennis.davidson@salisburypost.com SALISBURY – On this date four years ago, most folks in Rowan County had never heard... read more