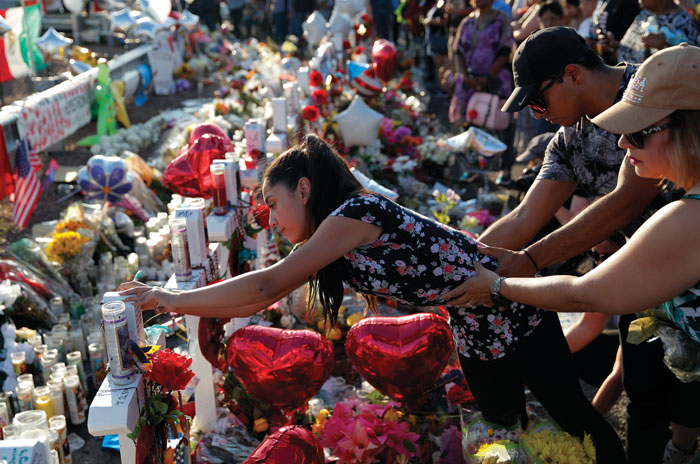 A woman leans over to write a message on a cross at a makeshift memorial at the scene of a mass shooting at a shopping complex, Tuesday, Aug. 6, 2019, in El Paso, Texas. (AP Photo/John Locher)

OXNARD, Calif. (AP) — The Dallas Cowboys are donating $50,000 to a fund for victims of the mass shooting that killed 22 people and left about two dozen others injured in El Paso, Texas.
The team said Wednesday the NFL Foundation was planning a matching donation to the El Paso Community Foundation Victims’ Fund. Cowboys executive vice president Charlotte Jones Anderson is chairwoman of the NFL Foundation.
The Cowboys have had community outreach programs for years in El Paso, the far West Texas city with a large contingent of Dallas fans. Owner Jerry Jones said earlier in the week the team is “so appreciative of the support we have in El Paso.”
Jones Anderson said the club’s hope is that “so many others in Texas and around the country will be inspired to assist the loved ones who are grieving.”
The El Paso foundation is waiving administrative and credit card fees for donations. The website to donate is https://payments.epcf.org .
___
More AP NFL: https://apnews.com/NFL and https://twitter.com/AP_NFL