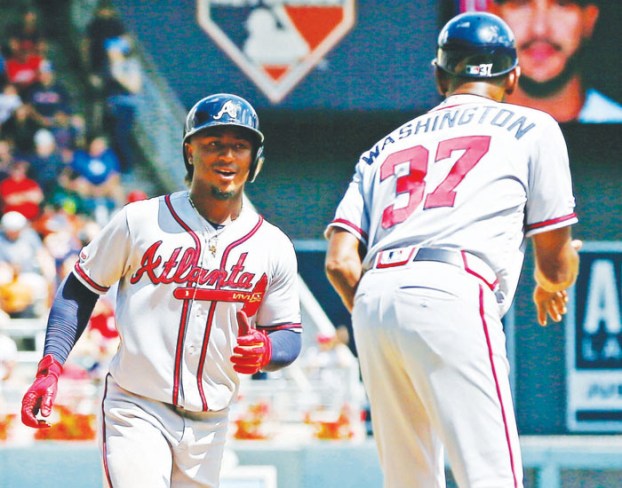 MINNEAPOLIS (AP) — The Minnesota Twins have put on quite the power display this season at Target Field.

The Atlanta Braves produced an even bigger show of strength to win this interleague series between first-place teams.

Ozzie Albies homered twice in his second straight four-hit game, Ronald Acuña Jr. and Freddie Freeman both went deep, and the Braves again bashed their way past the Twins 11-7 on Wednesday.

“They’re relentless. That’s a really good ballclub,” Braves manager Brian Snitker said, reflecting on the Twins and their majors-most 224 home runs that is well on pace to break the all-time season record. “You never feel good against this club until the game’s over.”

Max Fried (13-4) used a season-high 10 strikeouts to win his fourth consecutive start, pitching into the sixth inning before finding trouble. The terrific trio at the top of the lineup provided more than sufficient support, with Acuña, Albies and Freeman combining for eight hits and five RBIs in 15 at-bats. They were 23 for 45 with seven home runs and 15 RBIs in this three-game series.

Fried struck out seven of the first nine batters he faced. He’s 6-0 in his last nine starts on the road, becoming the first Braves left-hander to reach the 13-win mark since Mike Minor in 2013.

“When you already have a couple runs across, it makes it easier to relax and try to make a few pitches,” catcher Tyler Flowers said.

Albies and Freeman each connected on the first pitch they faced from Martín Pérez in the first inning, just like Acuña and Freeman did in the first and third innings on Tuesday night against Twins All-Star Jose Berrios. Charlie Culberson went 4 for 5 with two RBIs, Johan Camargo drove in three runs, and the Braves reached double-digit runs and 16 hits for the second straight day. This was the fifth time in three weeks the Twins allowed 10-plus runs.

The total would’ve been higher had it not been for the triple play turned in the third inning by third baseman Miguel Sanó, second baseman Jonathan Schoop and first baseman C.J. Cron on a sharp grounder hit by Flowers. That was the second triple play the Twins handed Pérez this summer, this one coming with the bases loaded and three runs already in for the Braves to keep them from building on their 6-0 lead.

Sanó hit a three-run homer in a four-run ninth for the Twins, who now have five 20-home run hitters to take into their critical four-game series against Cleveland this weekend. The Indians won the first game of their doubleheader on Wednesday to trim the lead in the AL Central race to 2½ games, entering the evening.

“They’re a really good team. I think we’re a better team,” center fielder Jake Cave said. “So we get to play them a lot, but this one in particular is big.”

Albies and Freeman gave the Braves their 12th set of back-to-back homers this season, a franchise record and the most in the majors in 2019. The top three spots in the lineup have produced 81 home runs this season, the most in the NL. Albies had his third multi-homer game of the year, but entering the game he had only one home run in his previous 114 at-bats.

“I’m just so proud of what he’s done this year and where he’s come, how much he’s grown and matured,” Snitker said.

Pérez (8-5) worked six innings to save the bullpen, but this latest dud means he might be headed there himself when Michael Pineda is ready to return from the injured list. Rookie Devin Smeltzer, who is scheduled to start on Friday night in Pineda’s place, pitched six shutout innings in his last turn. Pérez fell to 0-2 with a 6.67 ERA and 11 home runs allowed in his last five starts.

He only surrendered seven homers in his first 18 appearances of the season.

The ugly third inning that was salvaged by the triple play featured two walks, a passed ball on catcher Mitch Garver and a dropped throw for an error on Cron. The weekly severe weather siren test fittingly occurred during that inning, perhaps a symbolic warning to the Twins to pick up their play before the Indians arrive.

Braves: Acuña hit himself on the left shin with a foul ball in the sixth inning. After an extended evaluation, he stayed in the game and struck out. … After the game, the Braves placed rookie LF Austin Riley on the injured list with a knee ligament injury suffered during a weight room workout on Tuesday.

Twins: RHP Kohl Stewart, who relieved Pérez, rejoined the team before the game from Triple-A Rochester. Stewart was the third pitcher in the last week to ride the fresh arm express, with RHP Cody Stashak taking the return trip after a 44-pitch outing the previous night, and Stewart was promptly sent back after the game.

Twins: RHP Kyle Gibson (11-4, 4.02) will take the mound on Thursday to start the first of three remaining series against the Indians, who will turn to RHP Mike Clevinger (6-2, 3.07) for the opener.

Martin’s 2-out, 2-run single in 9th, and Dodgers walkoff again