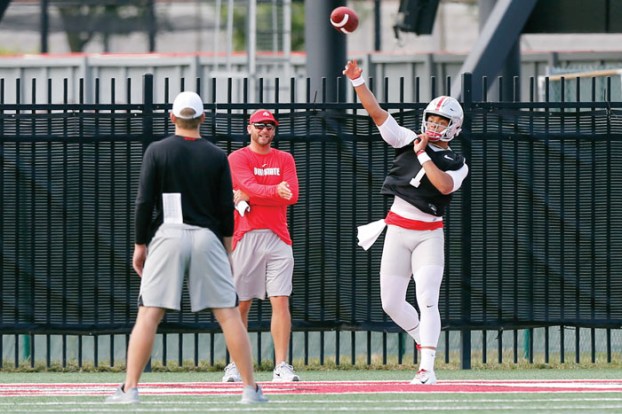 COLUMBUS, Ohio (AP) — Justin Fields knows all about heat. He grew up in Georgia.

But the pressure cooker in which the celebrated prep quarterback now finds himself is about to get turned up.

The pressure is always crushing on anyone who starts at quarterback for Ohio State. But Fields, who transferred from Georgia last winter, is expected to pick up where record-breaking Heisman Trophy candidate and first-round NFL draft pick Dwayne Haskins Jr. left off.

Fields , a 20-year-old sophomore, has never started a college game. He saw only limited playing time in his freshman season, mostly in mop-up duty behind Jake Fromm.

He comes to Ohio State with great expectations and great hype. He was one of the highest-rated high school prospects at any position in 2018. He is said to have nearly the arm that Haskins does but with the speed and elusiveness his predecessor lacks.

New Ohio State coach Ryan Day is the first to note that Fields must still earn the starting job. But that’s really just a formality.

“Physically, he checks all the boxes — running, athleticism, size, power, throwing ability, arm strength, accuracy, intelligence,” Day said. “He has all those things. Now it’s just a matter in August of putting on the field and seeing what kind of product we have.

“But in order to learn, you have to fail,” Day continued. “Unfortunately, we don’t have the luxury of failing a lot in practice and spending a few years as an understudy. Some of those failures are going to happen in a game, and there’s going to be a lot of deep breaths.”

In the months after spring practice, Fields put in his work. He threw with his receivers nearly every day.

“Right when you come into a new place you can’t just come in and just act like you’re a leader,” he said. “You have to kind of get used to the guys and build relationships with them so they trust you. Then you can step out and become a leader.”

Austin Mack is expected to be one of Fields’ top targets. He also has something to prove after missing the final six games last year with a foot injury. He was hurt in the humiliating loss to unranked Purdue , a defeat that kept the Buckeyes out of the playoffs.

Mack said he and fellow senior receivers K.J. Hill and Binjimen Victor have taken it upon themselves to help the new guy get up to speed.

“He came from Georgia so he came from a good program that’s used to winning,” Mack said. “He’s been there, he knows what it’s like. He just doesn’t know our culture. So the biggest thing for us is to help get him acclimated, get him used to being in that huddle. Like, ‘Hey bro, speak up, you’re good, take control.’”

Fields symbolizes the new normal for college football , with the transfer portal providing a way out for impatient players who don’t want to wait to play.

Tate Martell had been waiting his turn behind Haskins but transferred to Miami after Fields arrived. After spring practice, quarterback Matthew Baldwin left for TCU.

At Georgia, Fields was the target of a racist comment from the stands. That may have helped his argument for immediate NCAA eligibility. Typically, a player has to sit out a season.

He calls the move to Ohio State a “business decision” that allows him to play for Day, who helped develop Haskins into an NFL draft pick.

The backup is expected to be Gunnar Hoak, who played at Kentucky and also came via the transfer portal as a graduate student.

Fields says he’s ready to handle the spotlight. He basked in it as a five-star recruit in high school while taking part in the Netflix documentary series “QB1: Beyond the Lights.”

“You’ve just got to embrace it,” he said. “All this hype and all that, you just got to back it up, not let everything get to your head.”

Buckeye Nation will be waiting. And not so patiently.

TUSCALOOSA, Ala. (AP) — Steve Sarkisian keeps hitting the jackpot when it comes to quarterbacks and other offensive playmakers.

A former USC and Washington head coach, Sarkisian left the Crimson Tide after the national championship game in January 2017 to head to the NFL. He took over an offense led by reigning NFL MVP Matt Ryan and All-Pro receiver Julio Jones. Before that, he arrived at USC in 2005 with Matt Leinart returning after winning the Heisman.

Now, he’s back at Alabama with plenty of tools at his disposal — including another Heisman candidate in quarterback Tua Tagovailoa.

“This isn’t as foreign to me,” Sarkisian said recently at Alabama’s media day. “I think what it is, is you come in and you try to evaluate the whole thing. We say, ‘Okay, how can I help this team continue to get better? How can I help these players improve and put them in the best position to have success, not only short term but long term?’ That’s our job as coaches.

“And then buying into the entire organization, and the program, and the values of the organization. That’s kind of my mindset — what I can do to help, do my part to put us in the best position to be successful.”

For starters, Alabama’s offense is definitely not broken so there’s little to fix.

And Sarkisian said his offensive philosophy starts with running the ball.

Sarkisian brings a familiarity with Tide coach Nick Saban and his program — and with Tagovailoa. He recruited the quarterback when he was at USC and the left-hander from Hawaii was a 10th grader.

Following his firing at USC , Sarkisian worked in the 2016 season as an offensive analyst at Alabama in 2017. He took over as coordinator when Lane Kiffin left for Florida Atlantic before the national championship game. Then Sarkisian left for the Falcons , where he and the defensive and special teams coordinators were dismissed following a disappointing 2018 season.

“It’s good to see coach Sark come back,” Tagovailoa said. “I have built a relationship with him since I was being recruited my sophomore year of high school. I think if we had any coach come in, I still think we’d have to all be comfortable with what he has to bring to the table. It’s just a different way of learning.”

Learning from Saban was a big reason why Sarkisian made his initial stop in Tuscaloosa in 2016.  He wanted to get a firsthand view of how Saban ran his program and what things he emphasized.

In the spring, he wasn’t hearing those messages for the first time.

“It just brought back a lot of thoughts and reminders and I was able to go back through some notes of why those things are important and then start to emphasize them on our own even on the offensive side of the ball to support that message,” Sarkisian said. “So I think it was big.”

He returns to the college ranks after two seasons in the NFL — much like Saban did after his foray with the Miami Dolphins.

The Falcons ranked fourth in the NFL in passing but 27th in rushing last season.

“I always had a lot of respect for Sark,” Saban said. “He’s very well-organized and does a good job with the players. He’s a good teacher. He’s got a really good personality. He’s easy to work with.

“He does a great job of managing the staff. I can’t really speak for him and how that helped his development as a coach, but my time in the NFL was very beneficial to me and how you are going to bring personnel to your team. And when you do that all the time, I think you get better at it.”

For Pop, finding team quickly will be a challenge