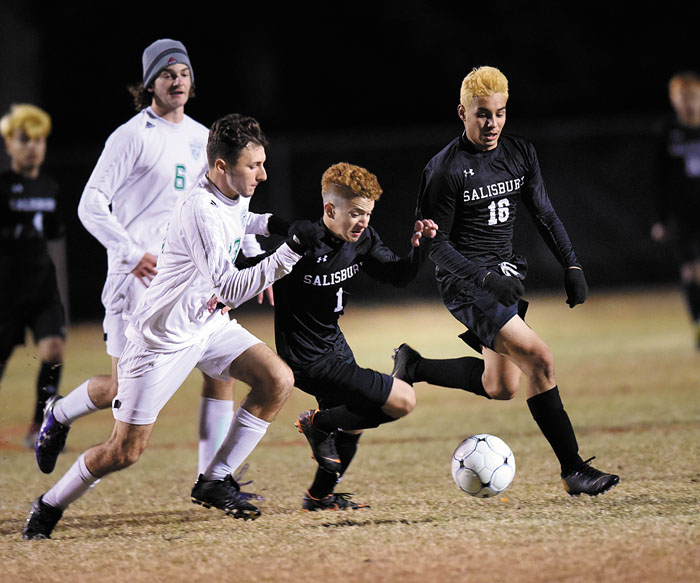 Wayne Hinshaw file photo/for the Salisbury Post ... Salisbury’s Dennis Anaya (1) and Christopher Portillo (16), shown during a match from last year, return for the Hornets this season.

The Hornets graduated 11 seniors from a team that went 24-3-1, captured the Central Carolina Conference, enjoyed a 13-match winning streak and was unbeaten in 16, before its 2018 season screeched to a halt in the 2A state semifinals — in a grueling round of penalty kicks, no less.

“Still haven’t watched it,” says Parrish, nearly nine months later. “I have it on tape and still can’t bring myself to watch it. I’m weirdly superstitious that way. When it really, really matters, I get more nervous than any of the players.”

Expect more anxiety this season, when Salisbury renews its quest for prominence. Gone are the likes of finisher Tony Figueroa, stalwart defender Jack Fisher, playmaker Luke Holland and fearless goalkeeper Josh Faulkner, Rowan County’s reigning co-Player of the Year. For the first time in a long time, Salisbury enters the season with more questions than answers.

Now for that message.

“It may not matter,” Parrish insists. “At this point in time, I know exactly one person’s starting position. But, a lot of the teams in our conference lost as many players as we did. A lot of teams that made the playoffs are in this recognition period, just like us, trying to fill holes and put it together as fast as possible. We lost 11 seniors and people may be thinking this is the time to go after Salisbury. That motivates me — and it’s never going to stop motivating me.”

Against that backdrop, the more-spit-than-shine Hornets began pre-season practice on Monday. Nearly a dozen lettermen return, led by sophomore Christopher Portillo, an attacking midfielder and the one sure thing in Salisbury’s lineup.

“He’s already a complete player,” Parrish says. “He’s got a great motor and exceptional on-the-ball skills. For his age, he already has the ability to orchestrate an offense. And he says he could even play goalkeeper for us, but look what we’d have to give up. I don’t think it’s worth it. For a team that has to find its identity right away, we need someone who can help us generate a front third. Chris gives us our best option.”

Portillo, initially a defender, was afforded ample playing time last year when a leg injury ended Holland’s season after eight games. “And immediately, he was a pain for opposing teams. He was tough to handle.”

When Portillo moved to the midfield, upstart Hugo Trujillo was inserted into Salisbury’s defensive alignment and helped solidify a back line that posted consecutive post-season shutouts against Patton and North Davidson. Now a senior, he slides over and takes the wheel as center back. “He and Angel Quintero saved our season,” Parrish says. “They were instrumental in us being able to maintain our level of play.

Defense remains the brick-and-mortar of Salisbury’s program, as its three state championship banners attest. Those squads used a sophomore/senior mix similar to this team’s makeup and prevailed in 2011, 2013 and 2015. “We’ve got a group of 10-to-12 rising 10th-graders who understand our history,” Parrish notes. “They’ve all played together on jayvee and are poised to make an impact.”

Other defenders include seniors Brody Dillon and Shawn Henderson, each of whom suffered injuries last season. Junior Juan Garcia-Cortez will also contribute as a defender and midfielder.

The most glaring gaps appear in the SHS attacking zone. Where will the juice come from?

“That’s a great question,” Parrish says. “At camp this summer, I had 24 or 25 people out there and I had them list their preferred positions. Eighty-five percent of them said defender. So, I honestly don’t know where the goals are going to come from.”

Among the candidates are junior forwards Dennis Anaya and Alex Alejo, along with sophomore Brayan Avilez. None are  household names, but each returns with promise and potential.

“A lot depends on where the meshing occurs, how fast it occurs and to what degree it occurs,” says Parrish, owner of a 167-25-11 career coaching record. “If the seniors can acclimate the sophomores immediately — and the sophomores fall into line with expectations — I think we can be a playoff team.”

It’s all about chemistry for Salisbury. And how quickly it can put the past behind it.

“Losing is part of every sport, every season, every game,” Parrish concludes. “But losing on penalty kicks is a special kind of angst. It was a terrible way to go out, but a powerful motivation going forward.”

Playoffs: Won 4 playoff games before falling to Newton-Conover on PK’s in 2A state semifinals