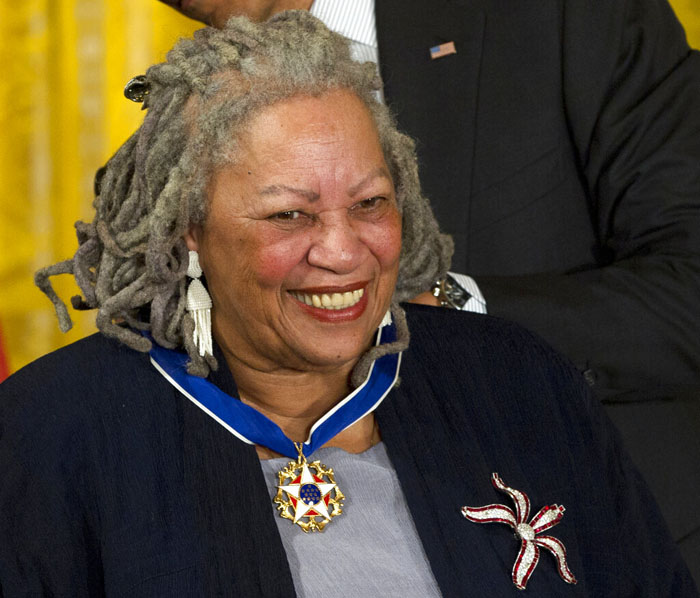 FILE - In this May 29, 2012 file photo, author Toni Morrison receives her Medal of Freedom award during a ceremony in the East Room of the White House in Washington. The Nobel Prize-winning author has died. Publisher Alfred A. Knopf says Morrison died Monday, Aug. 5, 2019 at Montefiore Medical Center in New York. She was 88. (AP Photo/Carolyn Kaster, File)

NEW YORK — Nobel laureate Toni Morrison, a pioneer and reigning giant of modern literature whose imaginative power in “Beloved,” ”Sula” and other works transformed American letters by dramatizing the pursuit of freedom within the boundaries of race, has died at age 88.

“Toni Morrison passed away peacefully last night surrounded by family and friends,” Morrison’s family said in a statement through the publisher. “She was an extremely devoted mother, grandmother, and aunt who reveled in being with her family and friends. The consummate writer who treasured the written word, whether her own, her students or others, she read voraciously and was most at home when writing.”

Few authors rose in such rapid, spectacular style. She was nearly 40 when her first novel, “The Bluest Eye,” was published. By her early 60s, after just six novels, she had become the first black woman to receive the Nobel literature prize, praised in 1993 by the Swedish academy for her “visionary force” and for delving into “language itself, a language she wants to liberate” from categories of black and white.

Morrison helped educate her country and the world about the private lives of the unknown and unwanted. In her novels, history — black history — was a hidden trove of poetry, tragedy and good old gossip, whether in small-town Ohio in “Sula” or big-city Harlem in “Jazz.” She regarded race as a social construct, and through language founded the better world her characters suffered to attain, weaving in everything from African literature and slave folklore to the Bible and Gabriel Garcia Marquez.

“Narrative has never been merely entertainment for me,” she said in her Nobel lecture. “It is, I believe, one of the principal ways in which we absorb knowledge.”

Winner of the 1988 Pulitzer Prize for “Beloved,” she was one of the book world’s most regal presences, with her expanse of graying braids; her dark, discerning eyes; and her warm, theatrical voice, which could lower to a mysterious growl or rise to a humorous falsetto. “That handsome and perceptive lady,” James Baldwin called her.

Her admirers ranged from college students and housewives to Barack Obama, who awarded her a Presidential Medal of Honor; Bill Clinton, whom the author called “our first black president”; and Oprah Winfrey, who helped expand Morrison’s readership. Morrison shared those high opinions, repeatedly labeling one of her novels, “Love,” as “perfect” and rejecting the idea that artistic achievement called for quiet modesty.

“Maya Angelou helped me without her knowing it,” Morrison told The Associated Press during a 1998 interview. “When she was writing her first book, ‘I Know Why the Caged Bird Sings,’ I was an editor at Random House. She was having such a good time, and she never said, ‘Who me? My little book?’

“I decided that … winning the (Nobel) prize was fabulous,” Morrison added. “Nobody was going to take that and make it into something else. I felt representational. I felt American. I felt Ohioan. I felt blacker than ever. I felt more woman than ever. I felt all of that, and put all of that together and went out and had a good time.”

Morrison was born Chloe Anthony Wofford in Lorain, Ohio, a steel town outside of Cleveland. She attended Howard University, where she spent much of her free time in the theater, and met and married a Jamaican architect, Harold Morrison, whom she divorced in 1964. They had two children, Harold and Slade.

Even when she was growing up, she believed she was smarter than the white kids and took it for granted she was wiser. She was an honors student and attended Howard because she dreamed of life spent among black intellectuals.

But although she went on to teach there, Howard disappointed her. Campus life seemed closer to a finishing school than to an institution of learning.

Protesters, among them her former student Stokely Carmichael, were demanding equality. Morrison wanted that, too, but wondered what kind.

“I thought they wanted to integrate for nefarious purposes,” she said. “I thought they should demand money in those black schools. That was the problem — the resources, the better equipment, the better teachers, the buildings that were falling apart — not being in some high school next to some white kids.”

In 1964, she became an editor at Random House and one of the few black women in publishing. Over the next 20 years, she would work with emerging fiction authors such as Gayl Jones and Toni Cade Bambara, on a memoir by Muhammad Ali and books by such activists as Angela Davis and Black Panther Huey Newton. A special project was editing “The Black Book,” a collection of everything from newspaper advertisements to song lyrics that anticipated her immersion in the everyday lives of the past.

By the late ’60s, she was a single mother and determined writer who had been pushed by her future editor, Robert Gottlieb, into deciding whether she’d write or edit. Seated at her kitchen table, she fleshed out a story based on a childhood memory of a black girl in Lorain who desired blue eyes. She called the novel “The Bluest Eye.” She had no agent and was rejected by several publishers before reaching a deal with Holt, which released the novel in 1969. Sales were modest, but critics liked it and Morrison soon signed up with Gottlieb and Knopf, which became her longtime publisher.