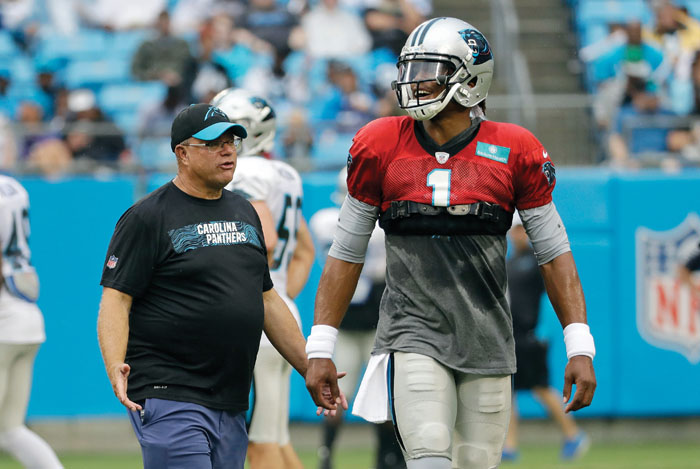 SPARTANBURG, S.C. (AP) — Cam Newton’s return to game action will have to wait.

Panthers coach Ron Rivera said Newton and linebacker Luke Kuechly will not play in Thursday night’s preseason opener against the Bears in Chicago, adding he’s being extra cautious with both players.

Newton is working his way back into form after having arthroscopic surgery on his right shoulder in January, while Kuechly missed time last week after he got “rolled up on” during practice. The six-time Pro Bowl linebacker wouldn’t disclose the exact nature of the injury.

The 30-year-old Newton hasn’t played a game since Dec. 17 and has been held out of some team drills during training camp as trainers aim to make prevent his right shoulder from becoming fatigued.

“Everything we do with Cam has been mapped out,” Rivera said Tuesday. “… So again, we just go through the next step of the process.”

Kyle Allen will get the start at quarterback against the Bears, while rookie third-round draft pick Will Grier from West Virginia and Taylor Heinicke are also expected to see playing time.

“This game, there really isn’t much to this one,” Rivera said. “And there are a lot of things that we want to see from the young guys and by doing that we give Kyle an opportunity right off the bat.”

The 6-foot-3, 211-pound Allen went undrafted last year, but is viewed by the Panthers staff as an intriguing prospect with the build and arm strength of an NFL quarterback. He took advantage of his opportunity last season, leading the Panthers to a surprising 33-14 road win against the Saints in his only start in Week 17. Although the Saints had already clinched a playoff spot, coach Sean Payton played all of his healthy defensive starters.

Allen said that game has given him confidence that he can play at the NFL level.

“You have to experience the highs and the lows to really find yourself and find that even-keeled personality,” Allen said. “And I think over the years, I’ve experienced those lows and I’ve experienced those highs, and now I understand how to stay even through all that stuff. Because that’s what you need to do, especially at the quarterback position.”

Jermaine Carter gets the start for Kuechly on defense.

Kuechly returned to full practice this week after missing time last week at training camp. Kuechly said Tuesday that he got hit on the side during practice, but added that “everything is fine.”

The seven-year NFL veteran likes to play in the preseason, joking that “it helps me remember how to play football.”

“You can’t tackle people out here (at practice) and there is a big difference between running by a guy and tagging off and actually tackling someone,” Kuechly said. “You have to do it like once or twice to get the feel for it. You need to get one tackle inside and one in space.”

Rivera also said running back Jordan Scarlett, the team’s fifth-round choice, will not play against the Bears either because of a back injury. Rivera said if it was the regular season Scarlett would play, but said the team is being cautious because they don’t want him to have another setback.

McDonald also noticed a difference in quarterback Ben Roethlisberger and the chemistry surrounding the team as a whole after the Steelers missed the playoffs for the first time since 2013. Both changes have him excited for 2019.

“I think it’s just an open dialogue and communication, not necessarily with (Roethlisberger), but with all guys,” McDonald said. “It’s not even worth waking up and going through the day mad or angry about a situation or about guys, so you put all of that into open air and let it go. It’s impossible to explain, but it feels very open, free and fun.”

Two-time All-Pro running back Le’Veon Bell declined to sign his $14.5 million franchise tender last year and opted to sit out his final season with the Steelers.

Wide receiver Antonio Brown, a four-time All-Pro, was benched by coach Mike Tomlin before a must-win Week 17 home game against Cincinnati. Then he spent the first two months of the offseason doing what he could to force his way out of town before he was ultimately traded to Oakland.

McDonald said he never considered Brown a distraction to the team.

“No one is perfect,” McDonald said. “He’s such a dynamic player, and the way he handles his business is one that’s very out front and in the open. I’m not going to judge or frown upon that. I loved the guy while I played with him and I think he’s the best receiver that I’ve ever seen.”

McDonald did, however, reference team unity as a whole.

“I never wish that anyone who walks through the doors and puts on a Steeler jersey is going to say that they’re more important than the man beside them, or they’re more important than the team,” McDonald said. “That’s not the mentality that we need, and when you get too much of that, things start to crumble. I’m not saying (Brown) had that, but it’s something we absolutely have to stay away from.”

McDonald feels confident that Roethlisberger will have another strong season after the two-time Super Bowl winner led the NFL in passing and broke the franchise record with 34 touchdowns.

“He’s the best there is,” McDonald said. “I believe it when he says that he’s going to be the best he’s ever been this year. This is only the second camp that I’ve been to with him and just his whole approach and demeanor is completely different this year. I think he’s ready and willing to do everything that it takes to win another championship.”

McDonald wants to build on that this season.

“At the end of the day, I want to do whatever it takes to win,” McDonald said. “If it ends up coming my way, I’m absolutely going to accept that. If the ball finds me more this year, I’ll gladly take it.”

McDonald, a second-round pick in 2013, spent his first four seasons in San Francisco. The Steelers acquired the 29-year-old in a trade two weeks before the start of the 2017 regular season, and he has developed into the leader of a tight end room filled with younger talent.

McDonald looks to step into more of a leadership role on the offense this season. He also wants to help fill the void following the offseason departures of Brown and Bell.

“You never want to enter in a position where you think you arrived or hit a ceiling,” McDonald said. “There’s always room for improvement and training camp is a great place to dive deeper into that, not only for relationships, but also your game.”