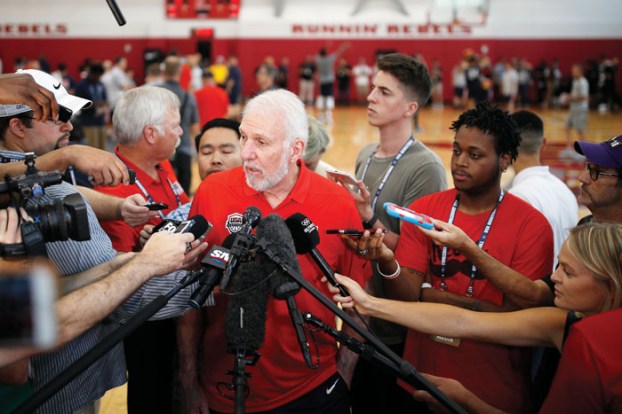 For Pop, finding team quickly will be a challenge

LAS VEGAS (AP) — USA Basketball coach Gregg Popovich typically has a month of NBA training camp and a half-dozen or so preseason games before he picks a San Antonio team, and then gets a few more months of the regular-season grind to mold those Spurs into playoff shape.

These aren’t the Spurs.

These are not typical times, either.

USA Basketball will finalize its World Cup team on Aug. 17 — meaning training camp, which started Monday, lasts less than two weeks. That also means there’s a real urgency in this camp in Las Vegas, since Popovich and his staff won’t have much time to decide who will fill the 12 spots on the roster that will head to China in search of a third consecutive World Cup title.

“We’re looking for guys who are competitive, who can handle the discipline it’s going to take to get this done, play a team game and basically fall in love with each other and have that empathy so that they feel responsible to each other and depend upon each other,” Popovich said. “That obviously means you don’t need the greatest amount of talent in the world.

“Too little talent is not a good thing, but we don’t have that problem.”

The biggest U.S. names — LeBron James, Kawhi Leonard, Stephen Curry, Kevin Durant, James Harden and so on — aren’t playing World Cup. There are four current All-NBA players expected in the tournament, and three of them will be aiming to beat the U.S. Nikola Jokic will lead gold-medal hopeful Serbia, NBA MVP Giannis Antetokounmpo is playing for Greece, and Rudy Gobert is playing for France.

The only American All-NBA guy in the mix is Kemba Walker, who knows team building over the next few days is vital.

Even though the U.S. roster lacks the biggest stars, there’s already a clear sense of competition.

Popovich brought in the select team — the younger NBA players who were invited to Las Vegas this week to push the national-teamers and potentially compete for their jobs — into practice Tuesday, and players said the intensity of play immediately ramped skyward. There’s no grace period for players to ease into camp, not with stakes this high.

“They came to play,” Miami center Bam Adebayo said. “I give them respect.”

It’s already clear that Popovich, entering his first tournament as the U.S. coach, doesn’t want the 12 best players. He wants the 12 best-fitting ones.

So the roster is still anyone’s guess.

Everything that happens on the practice floor and in scrimmages will matter in terms of evaluation, of course. But there’s also the off-the-court bonds that Popovich will be wanting to see, the ones forged over dinners and meetings and conversations. When the U.S. plane leaves Los Angeles for Australia next Saturday, bonds that might not currently exist will have to be firmly in place.

“It’s about how the group fits together,” Popovich said. “You know, 12 All-Stars probably aren’t going to work great unless you have the right mix of point guards and defenders, big guys who can spread the court and shoot it. It’s how they fit together. It’s about being competitive, who the most team-oriented guys, who are the most dedicated guys. This is a long journey and it takes a hell of a commitment.”