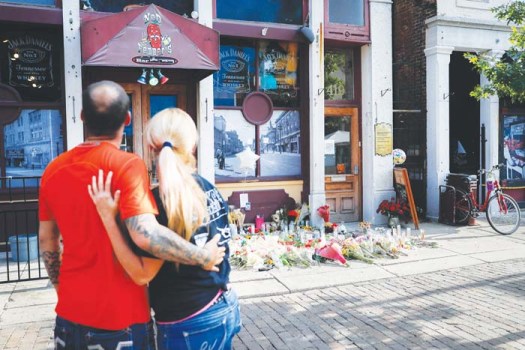 Mourners pause Tuesday at a makeshift memorial for the slain and injured outside Ned Peppers bar in the Oregon District after a mass shooting that occurred early Sunday morning. John Minchillo/Associated Press

EL PASO, Texas — El Paso opened a grief center Tuesday to help people cope with last weekend’s mass shooting at a Walmart, in which 22 people, nearly all with Latino last names, were killed and many others were wounded.

The center opened a day before President Donald Trump was due to visit the border city, much to the chagrin of some Democrats and other residents who say his fiery rhetoric has fostered the kind of anti-immigrant hatred that may have motivated Saturday’s attack. A protest rally was planned for Trump’s arrival today that organizers said would confront white supremacy and demand gun control.

Authorities on Tuesday revealed the first details of how they arrested Crusius. El Paso police spokesman Sgt. Enrique Carrillo said Crusius was driving a a Honda Civic when he stopped, got out with hands raised and surrendered to a motorcycle officer, saying he was the shooter. Carrillo said it happened about a quarter mile from the Walmart.

Several of the wounded victims remained hospitalized Tuesday, including at least one who was in critical condition.

One of the wounded, Octavio Ramiro Lizarde, recalled hearing gunshots ring out as he stood in line waiting to open a bank account inside the Walmart. He said he and his 15-year-old nephew, Javier Rodriguez, tried to hide in a manager’s back office.

“The shooter came, I guess he heard us. He shot him,” Ramiro Lizarde said at a news conference at Del Sol Medical Center, where he has been being treated for a gunshot wound to the foot. His nephew did not survive.

Within hours of the grief center opening Tuesday, victims’ families were already inside El Paso’s convention center in a wing the size of a football field, where services included counseling, travel assistance and financial support.

“We’ve got to make sure that folks have access to mental health care. There’s going to be a lot of trauma in our community, a lot of children saw things that no human being should see,” said Democratic Rep. Veronica Escobar, who is from El Paso. “The immediate need is that people get help navigating the various agencies and the various systems that are in place.”

George Cruz knows that well. He had taken in his gray Chevrolet Avalanche to get a new battery Saturday at the Sam’s Club next to Walmart. He got there an hour before the shooting started, and Tuesday he was trying to figure out how to get it back.

Since then, it had been part of a crime scene where police said as many as 3,000 shoppers gathered.

“I was at the office, watching live feed from the scene,” said Cruz, a real estate agent. “The truck is right there.”

Trump today is also expected to visit Dayton, Ohio, where another gunman killed nine people and wounded many others in an attack only hours after the El Paso mass shooting. White House counselor Kellyanne Conway recounted visits Trump has made to grieving communities after mass shootings in Parkland, Florida, and Las Vegas.

“He goes, trying to help heal communities, meeting with those who are injured, those loved ones who have survived, the innocents who have lost their lives so senselessly and tragically,” Conway said.

El Paso’s Republican mayor, Dee Margo, announced Trump’s visit at a news conference Monday evening, preemptively defending the decision to welcome the president while acknowledging there would be blowback: “I’m already getting the emails and the phone calls.”

Margo has previously criticized Trump for suggesting that El Paso, which had fewer homicides in all of 2017 than the death toll in Saturday’s attack, is a dangerous and unsafe place.

“This is not a political visit as he had before, and he is president of the United States,” Margo said, referring to a campaign rally Trump held in February. “So in that capacity, I will fulfill my obligations as mayor of El Paso to be with the president and discuss whatever our needs are in this community and hope that if we are expressing specifics, that we can get him to come through for us.”

Escobar and Democratic presidential candidate Beto O’Rourke, who was a congressman for six years, both said Trump wouldn’t be welcome in their hometown of El Paso.

“This president, who helped create the hatred that made Saturday’s tragedy possible, should not come to El Paso. We do not need more division. We need to heal. He has no place here,” O’Rourke tweeted.

Authorities say Crusius is from the affluent Dallas suburb of Allen and drove more than 10 hours to El Paso before the attack. Allen, the police chief, said the gun used in the attack was legally purchased near Crusius’ hometown. He didn’t say what kind of gun it was but described the ammunition as 7.62-caliber, which is used in high-powered rifles.

The screed that was posted online before the attack rails against an influx of Hispanics into the United States, saying they will replace aging white voters and could swing Texas and the White House to the Democrats.

The gunman who killed nine people in Dayton, Ohio, had expressed a desire to commit a mass shooting and showed an interest in violent ideology, investigators said Tuesday as the FBI announced it is opening an investigation.

Federal investigators will try to determine what ideologies influenced 24-year-old Connor Betts, who might have helped him or knew in advance of his plan, and why he chose the specific target of Dayton’s Oregon entertainment district for the shooting early Sunday, said Special Agent Todd Wickerham, the head of the FBI’s Cincinnati field office.

Dayton Police Chief Richard Biehl said Betts had “violent ideations that include mass shootings and had expressed a desire to commit a mass shooting.”

Wickerham didn’t say whether the FBI is looking at if the case could be treated as domestic terrorism. He said Betts hadn’t been on the FBI’s radar. He declined to discuss what specific ideologies might be linked to Betts’ actions but said there is no evidence so far that they were racially motivated.

Meanwhile, public conversation around the shooting shifted Tuesday toward how to address people with mental health issues who might pose a threat of violence, as a woman who briefly dated the gunman recounted their bonding over struggles with mental illness and the governor called for more mental health support along with gun safety measures.

Investigators haven’t offered a motive for why Betts, wearing a mask and body armor, opened fire with an AR-15 style gun outside a strip of nightclubs in Dayton early Sunday, killing his sister and eight others before officers fatally shot him less than 30 seconds into his rampage.

A woman who said she briefly dated him earlier this year wrote in an online essay that Betts had “dark thoughts,” including about wanting to hurt people. Adelia Johnson, 24, said they met in a college psychology class and bonded over dealing with mental illness, which she said allowed Betts to open up to her.

Johnson said she was in treatment but that Betts “didn’t want to seek help because of the stigma.” He told her he thought he had mental illnesses including bipolar disorder, she said.

“When he started joking about his dark thoughts, I understood,” she wrote. “Dark thoughts for someone with a mental illness are just a symptom that we have to learn how to manage.”

Johnson said on their first date, Betts showed her a video of the Pittsburgh synagogue shooting. She said Betts had “uncontrollable urges” that she called “red flags,” which eventually led her to call things off in May. When she broke up with him, she said she reached out to his mother to express her concern, but she didn’t elaborate on what they discussed.

Betts was white and six of the nine killed were black, but police said the speed of the rampage make any discrimination in the shooting seem unlikely.

Hospital officials said 37 people have been treated for injuries, including 14 with gunshot wounds.

The shooting and another mass shooting in El Paso, Texas, over the weekend left 31 people dead and more than 50 injured in less than 24 hours.

Johnson’s comments add to a conflicting picture emerging of Betts, with some people defending him as a nice guy and friendly neighbor while former schoolmates recall a troubled teenager.

Two former classmates told The Associated Press that Betts was suspended from Bellbrook High School after a hit list was found scrawled in a school restroom. That followed an earlier suspension after Betts came to school with a list of female students he wanted to sexually assault, according to the two classmates.

Others remembered how he tried to intimidate classmates.

“It’s baffling and horrible that somebody who’s been talking for 10 years about wanting to shoot people could easily, so easily, get access to a military grade weapon and that much ammo,” said Hannah Shows, a former high classmate who remembered seeing Betts look at people and imitate shooting at them.

“He was someone who enjoyed making people afraid,” she said.

“The Connor Betts that I knew was a nice kid,” Howard said.

Bellbrook-Sugarcreek Schools wouldn’t comment and refused to release information about his student records.

Sugarcreek Township police said the only records they have on Betts are from a 2015 traffic citation. They noted without further explanation that Ohio law allows sealed juvenile court records to be expunged after five years or when the person involved turns 23.

Bellbrook police say they weren’t aware of any history of violence.

GOP Gov. Mike DeWine said it’s clear Betts exhibited anti-social behaviors in high school that should have alerted those around him to a problem. But Betts had no apparent criminal record as an adult, and police said there was nothing that would have prevented him from buying a gun.

DeWine on Tuesday called on the Republican-led Legislature to pass laws requiring background checks for nearly all gun sales, allowing courts to restrict firearms access for people perceived as threats, and improving access to inpatient psychiatric care for those who need it most.

“If we, after a tragedy, only confine ourselves to doing those things that would have prevented this tragedy, we are missing a real opportunity,” DeWine said. “So we need to look at these tragedies together.”

President Donald Trump, who is expected to visit Dayton today, has said he wants Washington to “come together” on legislation providing “strong background checks” for gun users, but he gave no details.

The Democrat-led House has passed a gun control bill that includes fixes to the nation’s firearm background check system, but it has languished in the Republican-controlled Senate.

The El Paso and Dayton killings have contributed to 2019 being an especially deadly year for mass killings in the U.S.

A database by The Associated Press, USA Today and Northeastern University shows that there have been 23 mass killings so far this year, claiming the lives of 131 people. By comparison, 140 people died in mass killings in all of 2018. The database tracks every mass killing in the country dating back to 2006.