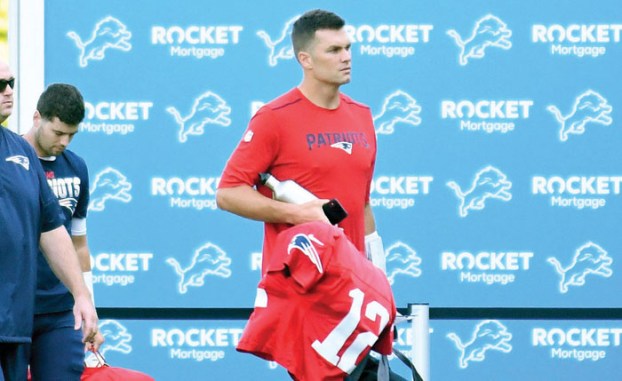 With new contract, Tom Brady still not looking too far ahead

ALLEN PARK, Mich. (AP) — Even with a new contract, Tom Brady faces some uncertainty about his future.

At his age, that’s hard to avoid.

“I’m ready to go this year and that’s really what matters. That’s where my focus is,” Brady said. “It’s a unique situation I’m in. I’m in my 20th year with the same team. I’m 42 years old, so pretty much uncharted territory I think for everybody. I’m going to go out there and do the best I can this year and see what happens.”

Brady agreed to a two-year, $70 million extension through 2021 that includes an $8 million raise in 2019, a person with knowledge of the deal told The Associated Press. The person spoke on condition of anonymity Sunday because the Patriots hadn’t announced the extension. ESPN, citing an unidentified source, reported that 2020 and 2021 are void years, and that Brady and the Patriots would need to negotiate further on those if he plays beyond this season.

“There’s a lot of guys who have one year left on their contract,” Brady said. “I’ve got one year to go and we’ll see what happens.”

The Patriots are in Michigan this week, holding joint practices with the Lions in preparation for a preseason game at Detroit on Thursday night. Brady turned 42 on Saturday. Fresh off his sixth Super Bowl title, he’s shown little sign of fading at this stage of his career.

“You’ve got to take care of your body. I wrote a book on it, literally. I live by it and I think it’s given me pretty good results,” Brady said. “I try to pass it on to the next generation so they don’t have to go on through the same mistakes that I did, but everyone learns different ways. Hopefully, I can be an inspiration.”

Both Brady and coach Bill Belichick referenced the team’s poor performance at Detroit early last season, perhaps as a way of maintaining focus this week. The Patriots lost that game 26-10.

New England went just 3-5 on the road during the regular season, although the Patriots did win at Kansas City in the AFC title game. Then they beat the Los Angeles Rams in the Super Bowl.

“Coach reminded us of that this morning — we were 3-5 last year. I wanted to remind him we were 5-5,” Brady said. “We won two important ones at the end, but I understand 3-5 for his argument’s sake works. But yeah, we have to be better this year. You’ve got to get into a routine. You come here and it’s a lot of things that are unfamiliar and you try to really focus on football, and our plays, and our techniques and our fundamentals.”

For now at least, Brady’s contract situation can be put aside, and the coming season can have his undivided attention.

“I love playing quarterback here. I love this team, this organization,” Brady said. “The focus is this year and what we’ve got to do. That’s where I’m focused. That’s all that really matters in the end. That’s what this team expects of me — to put everything into it, like I always have — and I’m really excited for the year.”

Norton attended practice at training camp Monday, and players huddled around him during a break midway through the workout.

“To have him out here smiling, it lifts your spirits,” defensive tackle Akeem Spence said. “It’s great. It shows his character.”

The Dolphins signed Norton in December, and following the accident placed him on the reserve/non-football injury list. He played at the University of Miami, was drafted by the Carolina Panthers in the seventh round in 2018 and spent much of last season on their practice squad.

Most of us stayed dry through the weekend, and the chance of rain for this week has diminished. Today we’ll... read more