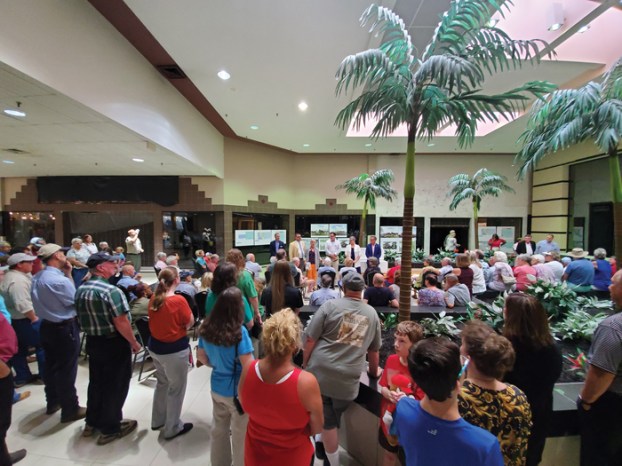 A large crowd of people turned out for a meeting about building an agricultural center at West End Plaza on Monday. County Commissioners were seeking input on two different versions of the idea. Josh Bergeron/Salisbury Post

SALISBURY – A large crowd turned out Monday to voice opinions on a proposed agricultural center at West End Plaza.

The Rowan County commissioners held an open house in the mall’s common area in order to receive feedback from residents on plans for renovations. The county has drafted plans for an agricultural center that would include meeting space and offices for Rowan County Cooperative Extension, the Soil and Water Conservation District offices, the N.C. Forestry Service and the Farm Service Agency.

Residents were provided the opportunity to view two designs being considered. One had been presented at a previous commissioners meeting and would come with an $18.93 million price tag. The proposal would include a demonstration garden, covered outdoor plaza, a new outdoor classroom and stage area, public green space, and, also, interior and exterior renovations.

The second option had been just created for Monday’s meeting. Neither county staff nor the architecture firm, ADW Architects of Charlotte, were able to provide a cost estimate for that option. But County Manager Aaron Church said the county had the debt capacity to pay for about $15 million in renovations at the mall. 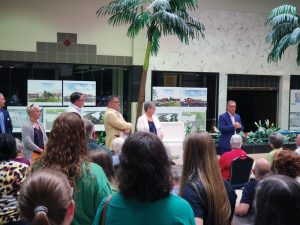 County Commissioners Chairman Greg Edds (right) speaks to the large crowd of people who turned out for a meeting about building an agricultural center at West End Plaza. Commissioners were seeking input on two different versions of the idea. Josh Bergeron/Salisbury Post

Before viewing the plans, the crowd of attendees had a brief back-and-forth with staff, architects and commissioners about the price tag and the idea of repurposing the former mall.

Sally Bradley said she was not sure which one she liked best, but said she thought the idea was interesting.

Aaron Oliver said he generally liked the look and that he thought “the exterior needs less work than anything else as far as how the space is divided up.”

“What they plan to do as far as agricultural needs for the offices to move in, I think it works fine,” Oliver said. “I think this will better Rowan County. … This end of Rowan County needs some revitalization. It could only benefit this part of the county and help it to grow and expand and move some other businesses out here.”

Rowan County purchased the building for $3.4 million in December 2013 as a home for county government office space. And so far the only county departments to move in have been the Board of Elections and Veterans Services.

“We see so much opportunity here to really build our community and to make this place, a beautiful place,” said Amy-Lynn Albertson, director of the Cooperative Extension Office. “I see this as a huge opportunity for all of us,” Albertson said.

It will provide a space to practice sports and for the 4-H Agricultural Program, Albertson said.

“We could be a great agricultural center,” she said.

“The estimates that we got from the architects are just that. They’re estimates, and the way I’ve seen construction costs go up in the last year, by the time we put this thing together, we could be looking at $25 million,” Pierce said. “This is just the first step and it’s introducing the public in that we are conscience now about moving things forward.”

Ask Us: What is the status of Faith Road shopping center?

SALISBURY — In October 2017, the Salisbury Planning Board designated property at 517 Faith Road as a conditional district. That meant... read more