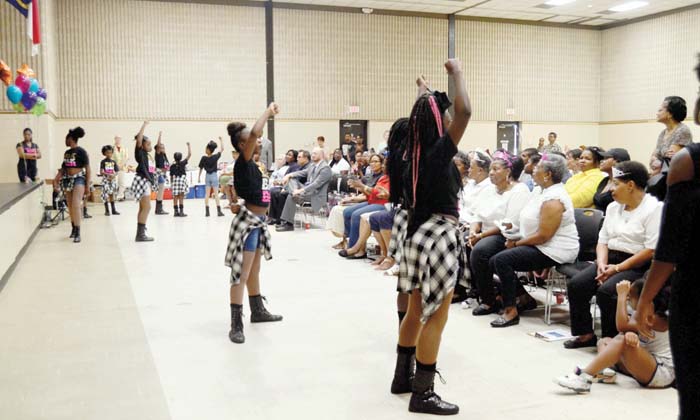 Triple Threat Dance team performs during the School Justice Kickoff event held Saturday at the Salisbury Civic Center. The event was held to bring awareness to the inequity in schools and courts. The dance team performed along with the Dancing Queens and Kings line dance group. Shavonne Walker/Salisbury Post

Devora Neely says she worries as a parent for her African-American son.

Neely says she hopes he won’t become a statistic and that he will receive a fair chance, not only in life, but in school.

She was among about 150 parents and community members in attendance at the Actions in Faith and Justice’s School Justice Kickoff event held Saturday at the Salisbury Civic Center.

The event was designed to educate parents and bring awareness to the inequities that exist in schools and the court system. The event also was a lead-in to the development of an interagency partnership that is meant to reduce the school-to-prison pipeline.

The partnership is designed to help law enforcement, the court system and the school system work together to create some strategies to address student misconduct within the school system/community and convert them away from the juvenile justice system.

The Rev. Olen Bruner, who is co-chair of Actions in Faith and Justice, said he spoke with a parent who told him she didn’t have a child involved in the court system and wondered how this issue applied to her. He explained to her that children who can’t read in third grade are at greater risk for falling behind in school and finding themselves in trouble at school and, at some point, in a prison system.

“What are we doing as a community to keep the children in school?” Bruner asked.

Mayor Al Heggins, who was attending a conference, delivered a recorded message to those gathered. She mentioned the city’s partnership with District Court Judge Marshall Bickett to hold the School to Justice Partnership Stakeholders meeting Tuesday.

“The city and county can now begin the process of formalizing real juvenile justice and giving you a bright pathway to success,” Heggins said via video.

“When we stop the school-to-prison pipeline, we all win,” said guest speaker Adam Sotak.

Sotak is the director of the Public Engagement N.C. Child.

“What kind of story are we telling our children? What kind of world are we making for our children?” Sotak asked. “When we stand up to injustices that we know are there, speak up for needed systemic changes, we all win.”

In 2017-2018, in Rowan County, there were a total of 219 juvenile delinquency complaints, 92 of them were school-based complaints and out of those over 40 percent were children of color, according to data from the N.C. Administrative Office of the Courts.

Across the state, there were 11,325 school-based delinquency complaints during 2017-2018 and out of all of those more than 62 percent were infractions against children of color and with the largest single group being African-American with 46 percent.

Sotak attributed the decline to local community leaders and partners.

There are seven counties that already have these partnership programs — Brunswick, New Hanover, Greene, Lenoir, Wayne, Mecklenburg and Stanly.

“If we don’t have these partnerships to bring people together and hold one another accountable, often times that work doesn’t continue, doesn’t get done and we don’t want to see that happen,” he said.

April Kuhn, who is the Rowan-Salisbury School System chief legal officer, said addressing issues like this “are important for community members and parents to get involved to know about resources out there so we can create healthy and productive outcomes for students.”

The Rev. Dr. Kendal Mobley told the audience the difference between equality and equity.

“We have failed time and again to treat people as equals. Indeed we have allowed some to be oppressed and exploited so that others could benefit from their exploitation.

“One of the lingering disparities is evident in school discipline. We believe a school justice partnership in Rowan County will help us to reform our policies and practices with relation to school discipline and making them fairer for everyone so that all children in our community can get the equal education they deserve,” Mobley said.

Scattered throughout the program, the audience heard from the Jubilee Choir and saw performances by the Dancing Queens and Kings line dance group and Triple Threat Dance.

City Councilwoman Tamara Sheffield read the city’s Resolution of Reconciliation passed earlier this year that includes steps to recognize the challenges and obstacles that are facing those who are economically, politically and culturally marginalized resulting in present-day injustices.

Sheffield said she was one of the first supporters of this resolution.

The resolution also condemns the 1906 lynchings of three African-American men who were murder suspects. A mob removed them from the county jail, where they were hanged and shot before standing trial.

For more information and to stay updated about the Actions in Faith and Justice visit the organizations’ Facebook page.