Memories made: Intimidators fans look back on times at Moose Road stadium 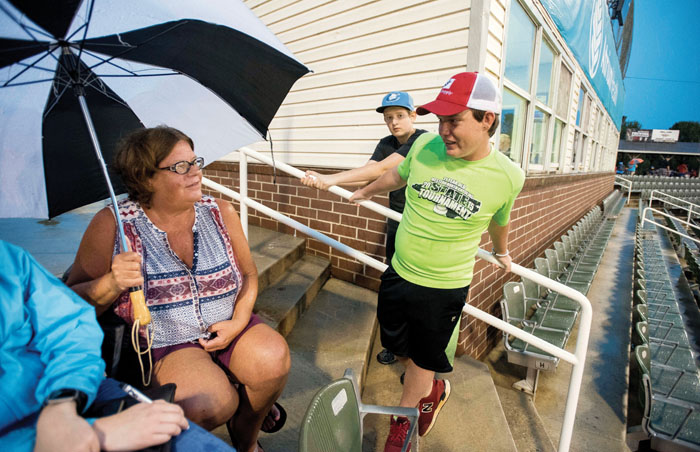 JON C. LAKEY/SALISBURY POST JoAnn Fugitt and her family are so drawn to baseball and including watching Kannapolis Intimidators. Season ticket holders JoAnn Fugitt (left) and her son Wes (right) wait out a rain delay at the Intimidators game on Thursday evening. Kannapolis, NC 8/1/19

Editor’s note: This is the first in a series of stories on the Kannapolis Intimidators’ final season at the Moose Road stadium.

KANNAPOLIS — On Aug. 29, the Kannapolis Intimidators will host their last game at Moose Road stadium, closing an era of memories for a baseball family.

The Intimidators will move to a new stadium in downtown Kannapolis at the start of the 2020 season. And players, fans and staff members are looking back on the memories made at the Moose Road stadium over the past 24 years.

JoAnn Fugitt has been a season ticket-holder for 21 years. She sits behind the catcher on the last row with her family.

The Intimidators have become part of their family over the years. Fugitt is a host mother for players, allowing them to stay at her home during the season, watching her kids participate in baseball camps and featuring the team on her Christmas card one year.

Over the years, her family has hosted 44 players. She began hosting because she saw a need. Many of the players came from Central or South America and did not have much money. She said one player who stayed with her used his $3,000 signing bonus to supply water to his family’s home in the Dominican Republic.

The players bonded with her kids, especially her oldest son, Dylan. Fugitt said André Rienzo, who was from Brazil, slept in a bunk bed in her son’s room during the 2010 season. Rienzo went on to play in Major League Baseball.

Some players would come watch her son play ball.

When Dylan was 6 or 7, Fugitt said he got the opportunity to be a player in an Intimidators game. It was a complete surprise to Fugitt.

“He came out fully dressed, did the whole warm-up, and it really was a neat experience,” Fugitt said. “We got a thousand pictures of that day.”

Fugitt said her family has had a lot of experiences that others haven’t because the ball players stayed in her home.

Her son Wes said some of his favorite Intimidators memories are catching his first ball and when Bryce Harper, who was with the Hagerstown Suns, hit a homer to the road beyond the field.

He said having players stay with his family is both fun and hectic. He has plenty of memories of staying up late playing video games with them or being invited to play catch with the players.

“I definitely wouldn’t be as big a fan as I am” if he had not gotten to know the players, Wes said.

Her twins have always attended games, including when she was pregnant with them. She said her doctor thought she was on bedrest, but instead she was at a game. She gave birth to twins Wes and Eli three weeks after the end of a season.

Fugitt has bonded with fellow fans over the years, some of whom have since passed away. She said a Mr. Reed came to every game and would leave at the sixth inning to go home before his wife’s bedtime. Another fan called Santa Claus sang “Take Me Out to the Ball Game.”

She says the dedicated fans are her baseball family.

“They were friends,” she said. “We met them here, and then they became our family.”

As the final game at the old stadium approaches, she knows it will be bittersweet. She has already warned people that she will cry the entire night.

Walk to End Alzheimer’s is Oct. 29 in Kannapolis