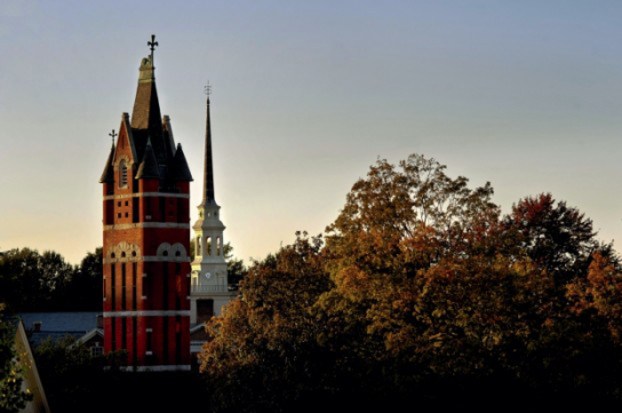 As chairman of the Bell Tower Green Board, Messinger said the park is about “building a better community” and “a place where we can all come together.”

“Let’s build a park” was the refrain echoed by speakers and attendees alike.

And that building will begin in short order. The large parking lots adjacent to the library and the Salisbury Post close today. Construction equipment was already on site Saturday and trees will be cut down starting next week.

It will be loud and dusty at times, but the effort would build a “quality park,” said Jason Walser, a member of the Bell Tower Green board. It’s going to be the best-looking park in the state, said state Sen. Carl Ford, who helped secure $50,000 in funding within the state budget that passed the legislature.

Importantly, the park’s construction will be funded by an awe-inspiring private fundraising campaign that’s generated an estimated $10 million to date. That’s speaks volumes about the priorities of the Salisbury community. On a 3.66-acre tract of land that could be the site of new high-end apartments, businesses or other development, the citizens of Salisbury are raising millions to build a park — a space where we can all gather without regard for socio-economic status or any other characteristics.

It will be Salisbury’s central park.

The loss of parking spaces will be a primary concern for many Salisbury and Rowan County residents, but the loss of the many spaces will be offset by the benefits that a well-designed downtown park will bring. It will making living in or near downtown a more attractive proposition. A trip downtown might start with a visit to a clothing boutique, include a visit to a local restaurant and end with a picnic in the park. And downtown Salisbury events will have their most attractive venue yet.

Construction is projected to take 18 months, wrapping up late next year, but there’s still fundraising to do, a fact fundraising co-chair Paul Fisher energetically reminded the crowd in attendance. While $10 million has been raised, Bell Tower Green hopes to raise $12 million.

The gap of $2 million seems lofty, but it’s made more manageable by spreading the cost into small donations. If just half of Rowan County’s roughly 140,000 residents donate $30, the cost of a few fast food meals, Bell Tower Green will easily raise the $2 million by the end of 2018 — the fundraising deadline.

Holding a hand towel emblazoned with the Bell Tower Green logo, Fisher encouraged the crowd to take the “rally flag” to church and wave it when walking out.

By becoming an “investor” in the park, donators can look forward to a return that includes a happy community, happy families, less crime and more people wanting to move here, Fisher said.

And a donation of any dollar amount is decidedly a better investment than any alternative.

For more information or to make a donation, visit belltowergreen.com. There’s a “give” button at the top of the homepage. Donations can also be mailed to: Bell Tower Green, Inc. 141 E. Council St. Salisbury, NC 28144. Those interested in donating can also call 704-637-0511, a number for the Blanche and Julian Robertson Family Foundation, which initially purchased the property

There are many exciting ongoing, just-completed and planned developments in Salisbury, but the Bell Tower Green Park tops the list, and we think it will be a first-rate asset for the city and its residents.

Salisbury City Council incumbents may face a unique campaign issue in 2019 because of the action, or lack thereof, that... read more