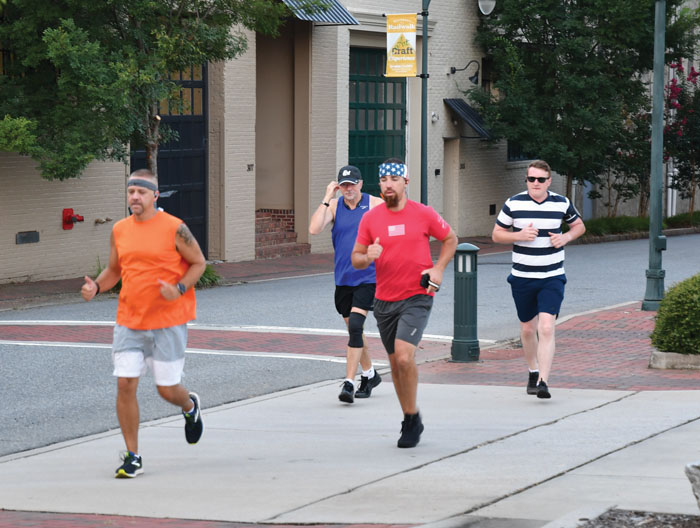 Now in its 14th year locally, over 700 local runners have completed classes on how to become a runner. Hosted by the Salisbury Rowan Runners and Salisbury Parks and Rec along with Novant Health and the Rowan County YMCA at times, I personally think it is the most rewarding thing that the club does. Running has been especially good for me and sharing it with others gives me a great thrill.

Amazing “benefitted from running” stories are all over town. One of the most current is that of Lt. Patrick Smith of the Salisbury PD. He’s the race director of the Foot Pursuit 5K and for the first time ever, he has become a consistent runner. Here is Patrick’s story.

Struggling to find a balance of nutrition, exercise and consistently keep a regular schedule had been a problem.

Patrick said, “I would change my training plans and never stick with one long enough to see if it truly worked. Never patient enough to give each plan a chance to work before I changed it, I often ended up injured for sometimes months. Starting back was hard and nobody likes starting over. By introducing a healthy diet that complimented my running and a better understanding of how to train and increase mileage, my running has never felt better. I learned the proper mix of speed, recovery and rest.”

Patrick, at 225 pounds, was diagnosed with stage 3 fibrosis of the liver in February, 2019. That’s one stage away from non-alcoholic cirrhosis which is irreversible and can lead to liver failure. His doctor reminded Patrick that none of his health issues occurred when he ran regularly. He told Patrick that exercising was a MUST.

Patrick said, “On February 17th, I made a lifestyle change, with the first six weeks focused only on my diet. I cut out all processed sugars, bread and dairy first, then stopped red meat and all gluten. Down 15 pounds after four weeks, my energy level was the highest in years. I reintroduced running into my routine. More weight fell off and I began logging my miles in May, initially completing the five mile Special Olympics Run, my greatest distance in probably five years.”

Now Patrick logs 20 to 25 miles a week with a total of 200 miles since May 14th. At 179 pounds, he’s approaching 50 pounds less than in May. The same doctor at the end of May gave Patrick a clean bill of health.

I asked Patrick why he thought the BRC program at the PD will be successful? He said, “For police officers, there is no better feeling than graduation day at the academy and the knowledge their career is beginning. Many consider themselves in the best shape ever because of the physical training just completed. Unfortunately, all too often the new job and the many new things to learn cause physical training to be sacrificed. Studies have proven that one of the main causes of officer deaths is heart disease brought on by stress and excessive weight around the mid-section. Cardio from running works the most important muscle in your body, is a great stress relief and aids weight loss. BRC will offer options to introduce running into their routine gradually while learning from experts how to do it the right way as a part of everyday life.”

He continued, “Any time the Salisbury Police Department gets to have a positive interaction with the community is welcomed. This will be a great way for our community and officers to get to know each other. I would like to see all ages involved.”

Bottom line, this could be a lot of fun. If you have been thinking about joining the class, this is the perfect time. Hope to see you there!