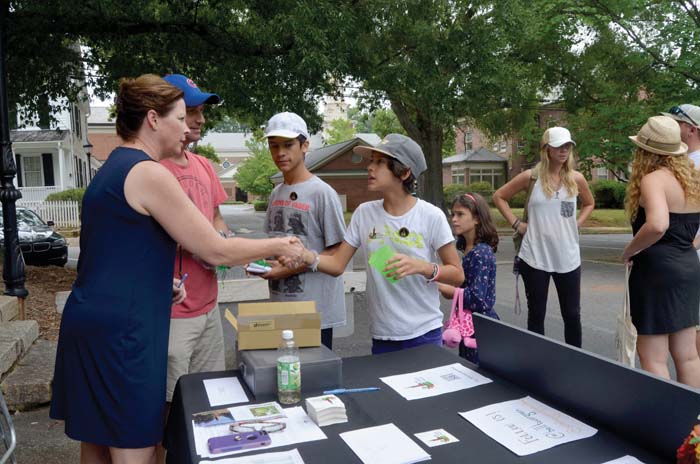 Drew Hodges, left, siblings Sammie, 11, and Kathryn, 8, became investors in the Bell Tower Green Park project on Saturday during a groundbreaking ceremony. The children told their parents, they wanted to mow lawns to raise money for the park after hearing park committee chairman Paul Fisher speak about it. Shavonne Walker/Salisbury Post

SALISBURY — Starting this weekend, Drew Hodges, 14, and his siblings Kathryn, 8, and Sammie, 11, are going to mow lawns to raise money. They aren’t spending it on themselves, but they’ve become arguably the youngest investors in the Bell Tower Green Park project.

The trio attended Saturday’s groundbreaking ceremony on the site that will be home of the future park and took the words of park board member, Paul Fisher, to heart.

Fisher reminded those gathered that the goal was to raise $12 million and thanks to investors they’ve raised $10 million. He said there is still work to do with about 150 days left of the year or $13,333.66 a day.

“We are under that pressure. You can help us,” Fisher said in his appeal.

The Hodges children heard him loud and clear and decided before the event was over to create a plan to invest. Their mother fronted them money that same day so they could receive their investor pins with the promise to begin raising money the same evening by mowing their family’s lawn first.

A number of stakeholders were in attendance — including Fred Stanback, one of the project’s biggest benefactors, along with his wife, Alice. Also in attendance were board and committee members as well as representatives of LandDesign of Charlotte, who brought detailed renderings of the park.

The park will include a water wall, leisure garden, promenade garden, a playground, outdoor dining and trellises, to name a few features. 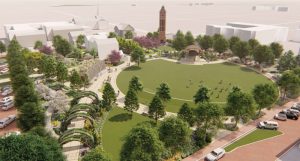 Rendering submitted – This rendering shows an aerial view of what the Bell Tower Green Park will look like when complete. Construction starts next week on the park and it’s scheduled to wrap up in late 2020.

Jeff Mis, an associate and senior designer with LandDesign said when creating green space in the park and collaborating with the community they’ve gotten into the heart of the design and feel a part of the community.

“Seeing how proud people are of the community and how excited they are, makes you want to work harder,” said Allison Merriman, a senior associate with the design firm.

The park is expected to take about 18 months to build, said Jason Walser, vice president for Bell Tower Green Inc. This week, he said, the community will start to see construction equipment come in. Walser warned it will be loud and dusty, but workers would be as conscientious to neighbors of the park as possible.

Walser said the city has been a phenomenal partner and will take over the upkeep of the park once it’s built.

“This project is about quality of life and economic growth opportunity,” he said.

It’s been a grassroots effort, he said, as the community has become a part of seeing this 250-year-old promise to build a park on the same plot of land come to fruition.

There were many chants throughout the event of the project’s rally call: Let’s build a park.

“We are in the right space at the right time,” said Salisbury City Councilwoman Tamara Sheffield.

She said she couldn’t be more excited.

Sen. Carl Ford has a $50,000 budget appropriation earmarked for the park, but the budget has not yet been signed into law.

NAACP President Gemale Black, who was in attendance, said he looks forward to the park being a place where future Juneteenth events can be held — a space where all people can feel welcomed. In 2018, the Juneteenth event was held in the parking lot across from the library.

“I think they have considered everybody. We’re excited,” Black said.

Marcus Fairley, religious affairs chairman of the Salisbury-Rowan NAACP chapter, said the park was a great space that would attract more people to Salisbury.

Rowan Public Library Deputy Director Melissa Oleen strolled by to admire the project renderings before the event got underway. The park will be across from the library.

“We’re excited. We have a lot of creative programs staff who are already looking into all the ways the library can collaborate with the city,” she said.

The park is a great use of green space, said Kaye Brown Hirst, who was in attendance. Hirst said she feels as though once the park is complete, people are going to be in awe.

“It’s a wonderful gift to ourselves,” she said.