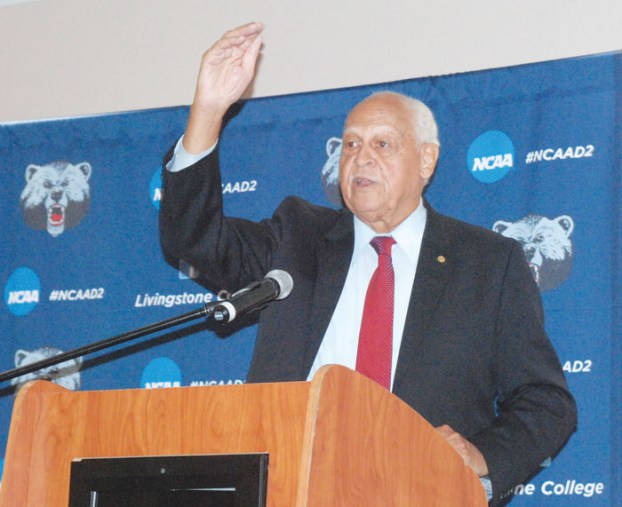 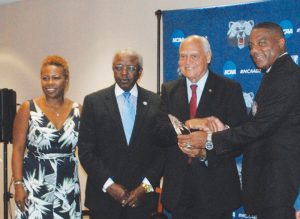 SALISBURY — It’s not often that you get advice from someone who has been inducted into 18 halls of fame, so it may pay to listen.

Willie Jeffries, who retired in 2001 after his second stint at South Carolina State, his alma mater, was the guest speaker on Friday at Livingstone’s Football Kickoff Luncheon. He gave thoughtful advice to the gathering of college administrators, coaches and fans, but he also entertained with anecdotes, numerous and humorous.

A handful of Livingstone players were present, as the entire team of Blue Bears will arrive and begin fall practice next week.

Athletic director Lamonte Massie-Sampson, eight months into the job, planned the luncheon and hopes to make it an annual event.

Williams said that his team returns nine players on offense and seven on defense, and with six home games, hopes that the Blue Bears can improve on last year’s 3-6 mark. He added that it is time to cut down on mental mistakes and penalties.

“We just won the CIAA academic award for the second year, so one thing we have to do is transfer over that ability to follow instructions onto the football field,” said Williams, not jokingly. “It hasn’t been correlating that way thus far, but we need to make sure that it happens this season. We’ve just got to take one game at a time and improve each and every week.”

In addition to S.C. State, Jeffries was head coach at Wichita State (1979-82) and Howard (1984-87). In all, Jeffries was a head coach for 29 years, winning 179 games. He had an ability to turn programs around. Wichita went from 1-10 to 8-3 under Jeffries and at Howard, the Bison, perennial doormats in the MEAC, enjoyed winning seasons.

He was also highly successful in high school football. At Granard High in Gaffney, S.C., in the 1960s, Jeffries’ teams were 65-7-2 and won three consecutive state 3A titles.

Jeffries challenged Williams and the Livingstone team to “raise the bar. Each year, continue to raise the bar and set your sails for success,” he said. “The greatest thing in this game is discipline, so paying attention to details is the most important thing.”

Jeffries also touched on the Commemorative Classic, the annual game between Livingstone and Johnson C. Smith, which was known as Biddle College when the two schools met in the first football game between historically black colleges in 1892.

“Of course, we’ve seen football evolve from that game on the front lawn here in Salisbury on that December day,” said Jeffries. “They played two halves of 45 minutes that day many years ago and they even chipped in their money together, to buy a regulation football. I always heard that the home economics classes made their jerseys. The significance of that game, played right here, is beyond historic.”

Jeffries, aware that his 28-minute talk was running a little long, mixed in fun stories throughout. “Sorry I’ve been up here a while. It’s like the little boy who asked his father what it means when a Baptist preacher puts his watch on the podium? His daddy said, ‘nothing,'” Jeffries said, amidst the laughter.

He ended his speech on a serious note:

“Success has no zip code,” Jeffries continued. “The students that come here are from a diverse society. Livingstone prepares them for a global society. It doesn’t matter the size of the house you come from or the car you drive, your environment can not be a crutch for not doing well. Success has no barriers.

“I’m a prime example,” he concluded. “Talk about being born in humble surroundings. My dad died when I was 4 years old and we were so poor that we had to put Kool-Aid on layaway. I ate cereal with a folk so my little brother could have the milk.”

Dr. Jenkins had earlier welcomed the group and was visibly enthusiastic about the upcoming school year.

“Athletics sort of speeds up the kinds of things in life that we all experience,” said Jenkins. “The joy of victory and agony of defeat. We all experience these things, maybe few and far apart, but in athletics, it happens on a regular basis. What comes out of it is people with a certain character — persistent and tenacious.”

In Hayes’ absence, McWilliams was surprised to have a spot at the podium, but happily stepped up and delivered, echoing Jenkins’ remarks.

“I was thinking about the legacy of football in this conference and at this institution, and Livingstone is ‘in stone,’ when it comes to that history,” she said. “Athletics is a character builder. You can win and feel good or lose and feel bad, but at the end of the day, the family comes together and lifts each other up in a community, in a crowd, in a family. This is the one place where students can be their best selves and if they’re not, there’s enough people around them to help them grow.”

NOTES: One of the Livingstone players present was 6-7 wide receiver Corey Hall, who transferred in last year from Monroe Junior College (N.Y.). “I’m excited about the season,” said Hall. “I feel that we have a lot of talent on the team and a lot of potential. And a little team work can take us a long way.” … The Blue Bears open the season on Sept. 7, at Clark-Atlanta, a 7 p.m. kickoff. A week later, the team hosts Elizabeth City State in its home opener (4 p.m.). … Another sample of Jeffries’ comedy routine: “I knew of a football player once that weighed 425 pounds. When went to a restaurant, he didn’t get a menu, he got an estimate.”