Cokie and Steven Roberts: Yes, the Russians are coming! 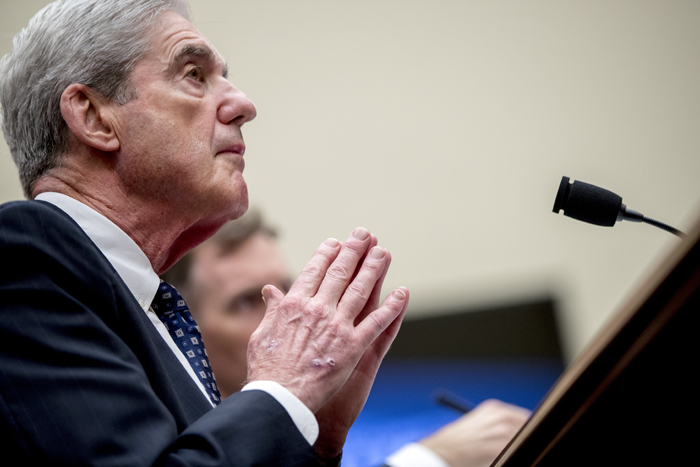 “Over the course of my career,” said the longtime FBI director, “I have seen a number of challenges to our democracy. The Russian government’s effort to interfere in our election is among the most serious.” Asked if those efforts are continuing, Mueller snapped, “They’re doing it as we sit here, and they expect to do it during the next campaign.”

So how did President Donald Trump and his acolytes respond? By denying and denouncing the unvarnished truth Mueller stated. By plunging their heads deeply into the sands of self-delusion.

Within days of Mueller’s appearance, Trump had engineered the departure of Dan Coats, his director of national intelligence, who had earned a reputation for courageous candor by refuting the president’s prejudices and emphasizing Moscow’s malign machinations.

A year ago, after the president eagerly embraced what he called Vladimir Putin’s “extremely strong and powerful” denials that Russia interfered in the 2016 election, Coats fired back: “We have been clear in our assessments of Russian meddling in the 2016 election and their ongoing, pervasive efforts to undermine our democracy.”

Another Trump appointee, FBI Director Christopher Wray, made a similar point at a Senate hearing the day before Mueller testified: “The Russians are absolutely intent on trying to interfere with our elections.”

Every Republican on the Senate Intelligence Committee signed a bipartisan report documenting the “growing volume of malicious activity” targeted at U.S. election systems. And while the senior Republican, Richard Burr of North Carolina, said some progress has been made in protecting those systems, he added, “There is still much work that remains to be done.”

The president has turned a deaf ear to all these extremely loud alarm bells. His first choice to replace Coats, Rep. John Ratcliffe, is an obscure Texan who seems to have only one qualification for the job: a slavish devotion to Trump and a ravenous appetite for discredited conspiracy theories embraced by the president and his cheerleaders in the right-wing media. (Ratcliffe withdrew from consideration for the job on Friday.)

At the same time, practical bipartisan legislation aimed at bolstering the ability of election officials to ward off Soviet subversion was blocked by the Senate’s Republican leader and Trump’s Chief Enabler, Mitch McConnell.

“A whole-of-government approach is impossible to achieve when the head of government is hostile to any meaningful action,” editorialized The Washington Post. “President Trump appears to interpret any defense against or even mention of Russian interference as an attack on the validity of his election.”

Trump’s relentless refusal to acknowledge Russia’s role in his victory symbolizes a much larger flaw in his approach to the presidency: rejecting any information that contradicts his view of the world.

Take just one example: After Coats testified last January that Iran was living up to its nuclear agreements, an enraged president tweeted that his own intelligence team should “go back to school.” Then he added: “They are wrong!”

There it is. Pure Trump. I am right and they are wrong. He derides and dismisses climate scientists who document global warming, economists who prove that tax cuts won’t pay for themselves and demographers who demonstrate that immigrants are essential for the nation’s economic health. And that approach makes rational decision-making and problem-solving impossible.

How can the nation respond to the tocsins tolled by Mueller, Coats, Burr and Wray (Republicans all) if there are no accepted facts, no common basis for deliberation, no respect for the professional researchers and analysts whose life works are to study, measure and describe reality?

The answer is clear. America cannot respond and the public knows it. In the latest ABC/Ipsos poll, only 17% said they were “very confident” that “the U.S. can effectively defend itself” from foreign intrusions into next year’s campaign.

It’s entirely appropriate for lawmakers to disagree on policies and priorities. But the whole process of decision-making is severely crippled when those lawmakers cannot even agree on the nature of the problem they are trying to solve.

As Douglas Wise, a former CIA officer and deputy head of the Defense Intelligence Agency, told The New York Times: “Intelligence has to be candid, truthful and accurate even if it is unpleasant and does not confirm to the biases of the president.”

The Russians are indeed coming. And Trump is not building a wall to keep them out. He’s opening a door to invite them in.