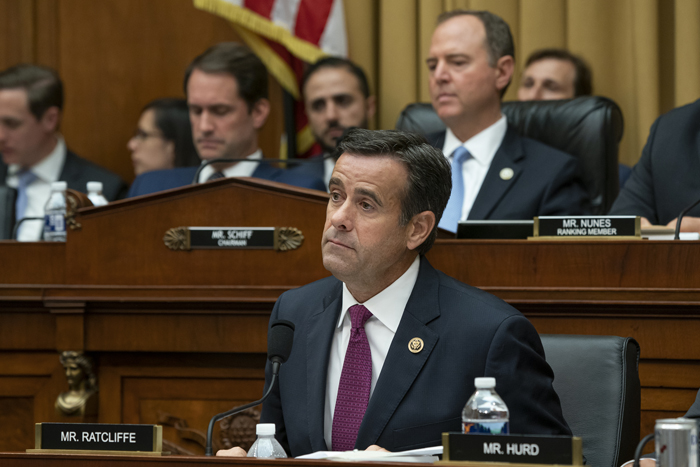 The move underscored the uncertainty over his confirmation prospects. Democrats openly dismissed the Republican congressman as an unqualified partisan and Republicans offered only lukewarm and tentative expressions of support.

The announcement leaves the intelligence community without a permanent, Senate-confirmed leader at a time when the U.S. government is grappling with North Korea’s nuclear ambitions, the prospect of war with Iran and the anticipated efforts of Russia or other foreign governments to interference in the American political system.

In a tweet Friday, Trump said Ratcliffe decided to stay in Congress to avoid “months of slander and libel.”

Trump didn’t cite specific media reports, though multiple stories in the last week have questioned Ratcliffe’s qualifications and suggested that he misrepresented his experience as a federal prosecutor in Texas.

Even as Mueller laid bare concerns that Russia was working to interfere with U.S. elections again, Ratcliffe remained focused on the possibility that U.S. intelligence agencies had overly relied on unverified opposition research in investigating the Trump campaign’s ties to Russia.

In his own statement, Ratcliffe said he remains convinced that he could have done the job “with the objectivity, fairness and integrity that our intelligence agencies need and deserve.”

“However,” he added, “I do not wish for a national security and intelligence debate surrounding my confirmation, however untrue, to become a purely political and partisan issue.”

Ratcliffe would have replaced Dan Coats, who repeatedly clashed with Trump and announced his resignation a week ago.

The White House in recent days fielded a number of calls from Republicans wary of Ratlciffe’s confirmation chances and uncomfortable with his qualifications, according to two administration officials not authorized to speak publicly about private conversations.

Several news stories in recent days called into question aspects of Ratcliffe’s resume and career, alarming some in the GOP, while a few key Republican senators already greeted his nomination with a lukewarm response.

Taking their cue from the president’s instinct to push back against the media and fight for problematic nominees, White House officials initially planned to rally around the choice. But Ratcliffe himself expressed concern to the West Wing about the scrutiny, the administration officials said.

They said that though the president long admired Ratcliffe’s interviews in which he defended the White House, as well as his performance in the Mueller hearings, Trump grew convinced that the nomination battle would become a distraction — and was quick to blame the media for treating his administration unfairly.

The scuttled nomination deepened questions about the White House’s seemingly haphazard vetting process, but Trump brushed aside those concerns, even crediting the media for its role in the process.

“You vet for me. I like when you vet … I think the White House has a great vetting process. You vet for me,” Trump said. “When I give a name, I give it out to the press and you vet for me. A lot of times you do a very good job. Not always.”

North Carolina Sen. Richard Burr, chairman of the Senate intelligence committee, said in a statement that he respects Ratcliffe’s decision and he is committed to moving the official nomination through committee. “There is no substitute for having a Senate-confirmed director in place to lead our intelligence community,” Burr said.

Until then, lawmakers have privately and publicly urged Trump to put Sue Gordon, Coats’ No. 2, in charge once Coats steps down. But it’s unclear whether he will. Trump told reporters Friday that “certainly she will be considered” for the acting director position.

For Coats’ permanent replacement, Trump told reporters that he has a list of three people he’s working on over the weekend, and “probably Monday I’ll give you an answer.”

After Trump announced that Ratcliffe was his pick, Senate Republicans were publicly lukewarm on Ratcliffe’s nomination. Some expressed concerns that the House lawmaker, who was viewed as a partisan, did not come with the gravitas of Coats, who had longtime relations as a former senator. Some senators said they had never even heard of him before his questioning of Mueller.

Senate Majority Leader Mitch McConnell signaled a wait-and-see approach on Tuesday, saying only that he looked forward to meeting with Ratcliffe and discussing his background.

McConnell said that “generally speaking, I’d lean toward the president’s nominees.” But he declined to fully endorse Ratcliffe, who served as a mayor of a small Texas town and a U.S. attorney before being elected to Congress in 2014.

Oklahoma Sen. James Lankford, a Republican who is a former member of the intelligence committee, appeared more concerned, saying Ratcliffe will have “some catching up to do” in the role. He said Coats, who had spent decades in Washington, clearly had more experience.

“Is he qualified for that job?” Lankford asked, referring to Ratcliffe. “He’s a qualified, gifted individual, but I think it will take some time for him to do some on the job training to be able to get into it.”

Maine Sen. Susan Collins, a critical swing vote for the GOP who sits on the intelligence panel, praised Coats and said the intelligence position is very important to her because she co-wrote the legislation that created it 15 years ago. She said she had never heard of Ratcliffe before last week so she couldn’t comment on his qualifications but added that she wants “an independent, well-qualified individual in that post.”

Democrats strongly criticized Ratcliffe’s partisanship, noting he was a vocal skeptic of former special counsel Mueller’s investigation. They said he wasn’t suited for a position that is designed to objectively oversee the nation’s intelligence agencies.

Trump did little to assuage those concerns, saying of Ratcliffe on Tuesday: “I think we need somebody like that there. We need somebody strong that can really rein it in. Because, as I think you’ve all learned, the intelligence agencies have run amok. They’ve run amok.”