In North Carolina, a pension is based on the average of the last four years of salary. Egregious pay increases are referred to as pension spiking. Folwell told the Post this week that spiking is mathematical and does not necessarily mean illegal activity took place, and it is not a negative in the case of a promotion when a person’s pay increases significantly. 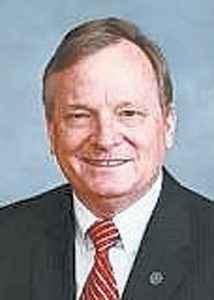 While that data wasn’t released until March, Linn’s retirement was announced in February. Later that week, the State Bureau of Investigation began a probe. And the SBI confirmed to the Post soon after its start that Linn and Gibson were the suspects in an embezzlement investigation.

Both Linn and Gibson resigned immediately.

The SBI is also investigating an unnamed third person.

Depending on the outcome of the case, the state could restrict pensions under the pension forfeiture law that allows the state to deny pensions for public officials who have been impeached, convicted or removed from office, Folwell said.

Interim Town Manager Kenny Isenhour has said he expects the SBI to make a conclusion about the alleged embezzlement at the end of the summer, which would move the lawsuit forward if there are any criminal findings.

But allegations leveled by the town against Linn and Gibson were not the first time Landis drew the state’s attention. Numerous times, it had received letters citing concerns by the Local Government Commission, a branch of the State Treasurer’s Office. Over more than a decade, letters to the town noted its low fund balance and overspending in various funds while continuously turning in audits late.

Greg Gaskins, the deputy N.C. treasurer, told the Post the Local Government Commission is typically tipped off of possible mismanagement of government funds in a number of ways, including by a town employee, a board or a resident. It also reviews a town’s audit for a fiscal year or more frequently if a town applies for a loan, which needs approval from the LGC.

Most recently, the town applied for a U.S. Department of Agriculture loan to upgrade its water system.

The Treasurer’s Office was made aware of the current allegations and began helping Landis move forward after receiving a call from town staffers.

Landis is on two different financial watch lists, Folwell said. Since the LGC has expressed financial concerns, it has been placed on a published unit assistance list. Landis is also on an internal watch list that signifies the town has economic risk.

Folwell used an example of Wilkesboro and its Tyson Foods factory. Although Tyson has no plans to leave the town, if the company were to do so, it would take a large portion of revenue with it, leaving Wilkesboro in a poor financial state.

If a town is in severe financial troubles, the North Carolina General Assembly can suspend its charter. Eureka’s town charter was suspended in June so the state could step in and help with a sewer system upgrade. Money and assets of the town are now held by the state treasurer.

The Local Government Commission will not make a decision about whether to step in until someone is indicted, the town is borrowing funds or it can’t pay its bills, Folwell said.

He said the town has been cooperating with the Local Government Commission staff to work toward resolving its financial problems.