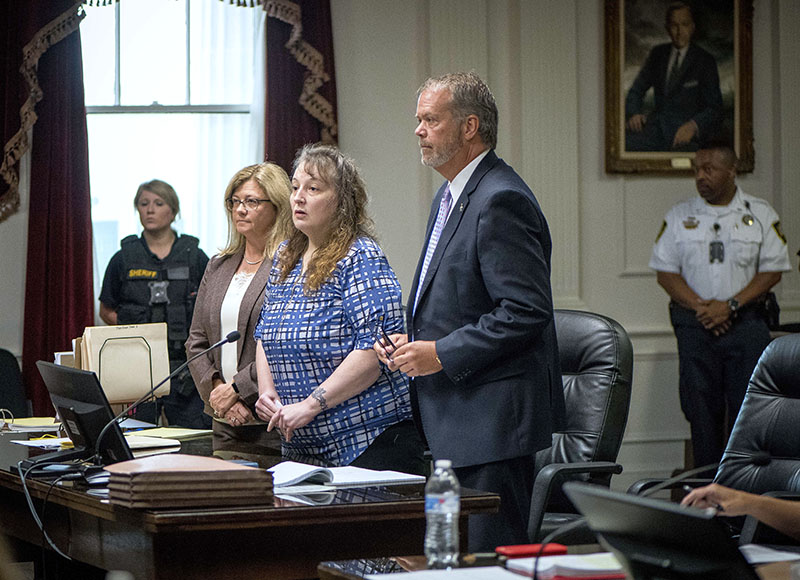 JON C. LAKEY/SALISBURY POST Casey Parsons, who adopted Erica Parsons, plead guilty in Rowan Superior Court on Friday to first-degree murder in the death of Erica Parsons. Casey Parsons (center), flanked by her attorneys Patricia Riddick and Robert Campbell, will spend the rest of her life in prison. Her plea comes as a result of a plea agreement and comes almost six years to the day that Erica went missing. Casey Parsons’ charges include first-degree murder, child abuse inflicting serious bodily injury, concealment of death and obstruction of justice. Salisbury, NC 8/2/19

She will spend the rest of her life in prison. Her plea comes as a result of a plea agreement and comes almost six years to the day that Erica went missing.

Rowan District Attorney Brandy Cook told the court about the initial report to authorities by Jamie Parsons. He told officers Erica Parsons was so abused her back looked like “Jesus’ back.” Erica Parsons often ate dog and cat food because she was starving, and would sneak out of the closet she was locked in and eat out of the trash can.

According to court statements, Shirley Stone, the mother of Casey Parsons, said they thought Casey was abusing Erica Parsons but abandoned those thoughts.

Cook detailed the horrific treatment that Erica endured at the hands of her adoptive parents and the other children in the home. Jamie Parsons told investigators he once “accidentally” broke Erica’s arm and his mom made a cast out of first aid supplies from Walmart. According to statements from other family members, Erica’s arm never healed properly and she never received proper medical attention.

Erica was not allowed to sleep in a bed, but instead spent most of her nights locked in a closet or on the floor in her parent’s bedroom. Casey often “bent Erica’s fingers back” as a “friendly reminder” to not get out of line, according to Jamie Parsons’ statements.

Any birthday or Christmas gift that was given to Erica, she got to play with as long as the gift giver was present and afterward her gift was given to one of the younger children — Sadie and Toby.

In his statement to authorities, which Cook read in court, Jamie Parsons said Erica “smelled bad” because his parents didn’t allow her to bathe and per autopsy reports, it’s believed she had an infection.

The young girl had numerous broken bones in varying stages of healing and, according to the medical examiner, there was no definitive cause of death.

According to her own statements, Casey told investigators Erica committed suicide by taking pills and later said the girl hanged herself with a dog leash. Casey Parsons said in statements that they poured bleach all over Erica so she would not smell. Erica was set aside in the tote while the family attended a Christmas party and at some point later she was driven to South Carolina where Casey and her husband, Sandy, buried Erica in a shallow grave.

Carolyn Parsons addressed the court, saying she thought she was doing the right thing by giving Erica to Sandy and Casey to raise.

“I gave her a gift that millions of people would have loved to receive,” Carolyn said.

During the close of the hearing, Casey Parsons stood to read a prepared statement, saying she didn’t know why she did the stuff she did.

She then apologized to God, Erica and her family.