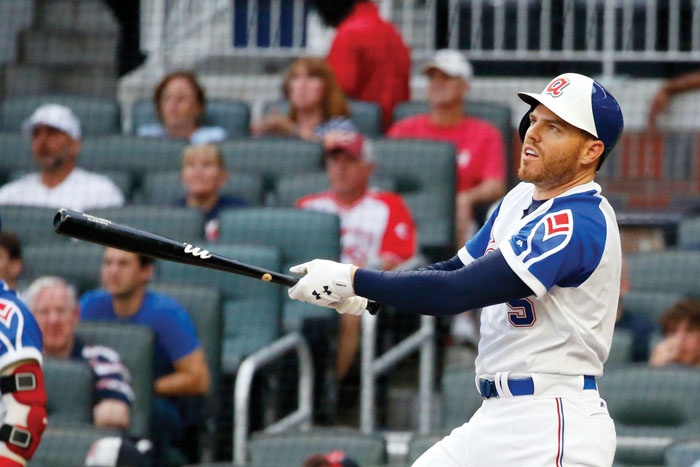 Atlanta Braves' Freddie Freeman watches his three-run home run during the first inning of the team's baseball game against the Cincinnati Reds on Thursday, Aug. 1, 2019, in Atlanta. (AP Photo/John Bazemore)

By PAUL NEWBERRY AP Sports Writer
ATLANTA (AP) — The Atlanta Braves were eager to show off their new relievers.
They weren’t needed, thanks to Max Fried and a line of severe thunderstorms.
Fried pitched six strong innings before the rain hit, giving the Braves a weather-shortened 4-1 victory over the Cincinnati Reds on Thursday night.
Freddie Freeman hit a three-run homer in the first and Adam Duvall went deep again — his fifth homer in six games since being recalled from Triple-A Gwinnett.
“It’s a little unfortunate,” Fried said. “My pitch count was down and I was excited to get back out there. But I’ll take the win.”
Fried (12-4) threw one pitch in the top of the seventh — his 76th of the game — before strong storms swept across SunTrust Park, forcing the umpires to hastily call out the grounds crew. Nearly two hours after play was halted, lightning continued to crackle across the sky and sheets of rain turned the warning track into a muddy mess.
With no sign of the storm letting up, the game was finally called with the area under a flash flood warning until early morning.
The Braves acquired three relievers before Wednesday’s trade deadline: new closer Shane Greene, along with Mark Melancon and Chris Martin.
Melancon began to loosen up at the beginning of the seventh, but it wasn’t long before the rain sent him scurrying for cover.
“We got all that bullpen help, and we didn’t even need it,” Freeman joked.
Fried breezed to this third straight win, surrendering just four hits. After Jose Peraza’s RBI single in the second, the left-hander retired 11 straight hitters before Nick Senzel reached on catcher’s interference.
Reds starter Anthony DeSclafini (6-6) trailed 3-0 before getting his first out. Ronald Acuña Jr. led off the bottom half of the first with a double and moved over to third on Ozzie Albies’ single. Then, after fouling off three straight two-strike pitches, Freeman went the opposite way for his 26th homer of the season.
“They were definitely aggressive,” DeSclafini said. “We got ourselves in a hole.”
Duvall struck out with the bases loaded in the third, but he resumed his torrid streak leading off the sixth against his former team. On Wandy Peralta’s fourth pitch after replacing DeSclafini, Duvall launched a 434-foot drive over the center-field wall for his fifth homer in six games since being called up from Triple-A Gwinnett.
FILL-IN MANAGER
Reds skipper David Bell began serving a six-game suspension for his role in a bench-clearing brawl that broke out during Tuesday’s game against the Pirates.
Three players on each team also received suspensions, but all will be allowed to play while appealing. Bell began serving his penalty, forcing bench coach Freddie Benavides to run the team.
“All of us go over the game plan. We have a very good idea of what we want do from the first pitch on,” Benavides said. “Sometimes, in the heat of the moment, there’s a little bit more pressure. It’s easy to give scenarios and ideas, but now I have to make the decisions.”
DUVALL’S JOURNEY
Duvall had a pair of 30-homer seasons for the Reds before being dealt to Atlanta during a dismal 2018 season. After failing to make the team in spring training, he spent much of the year trying to rebuild his swing in the minors.
Duvall hit 29 homers for Gwinnett and was finally recalled last week when Nick Markakis was hit by a pitch, suffering a fractured wrist.
“He got his confidence back,” manager Brian Snitker said of Duvall. “When he came back up, he was a different guy.”
BAUER’S DEBUT
Pitcher Trevor Bauer, who was acquired from Cleveland in a blockbuster deal at the trade deadline, will make his debut for the Reds on Saturday. He’ll be opposed by Atlanta’s Dallas Keuchel.
DONALDSON’S D
Braves third baseman Josh Donaldson is known for his slugging, but he made a couple of big defensive plays at third base.
The highlight was a leaping grab of Eugenio Suarez’s liner in the fourth.
“You always hear about his bat,” Fried said of Donaldson. “I didn’t realize how good he is with the glove.”
TRAINER’S ROOM
Braves SS Dansby Swanson (foot) will likely come off the IL this weekend. … Markakis watched the game from the Braves dugout with a cast on his wrist. He is expected to be out at least until mid-September.
UP NEXT
Braves RHP Kevin Gausman (3-6, 5.97) will look to bounce back from a tough start when he goes Friday against Cincinnati LHP Alex Wood (0-0, 3.86). Gausman went six innings in his last appearance at Philadelphia, surrendering six runs on nine hits in a 9-4 loss. Wood will be making his second start for the Reds after missing much of the season with an injured back.
___
Follow Paul Newberry on Twitter at www.twitter.com/pnewberry1963 His work can be found at https://apnews.com/search/paulnewberry
___
More AP MLB: https://apnews.com/MLB and https://twitter.com/AP_Sports