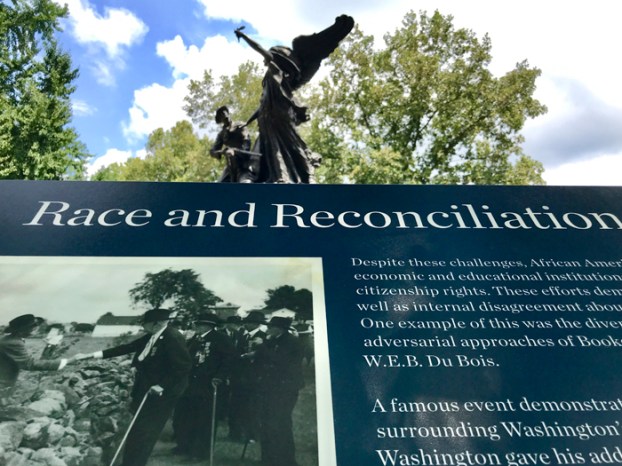 A new marker stands after being placed near the Peace Monument in Piedmont Park, Friday, Aug. 2, 2019, in Atlanta. The idea behind the new sign and others like it is to add context about the South's racist history. Critics say the monuments focus on white people and ignore widespread civil rights abuses in the post-Civil War South. Jeff Martin/Associated Press

Atlanta places markers about racist past near monuments

ATLANTA — New markers are now in place adding context to some of Atlanta’s divisive Old South monuments that harken back to the Civil War.

The idea behind the signs is to add a more complete view of history that includes the South’s racist past. Critics say the monuments ignore widespread civil rights abuses in the post-Civil War South.

Georgia law bars the removal of such monuments. North Carolina and other states — including Alabama, Mississippi,South Carolina, Tennessee and Virginia — have laws protecting Confederate monuments.

“This monument should no longer stand as a memorial to white brotherhood; rather, it should be seen as an artifact representing a shared history in which millions of Americans were denied civil and human rights,” says one of the markers installed Friday near the Peace Monument.

Atlanta’s decision to add markers near some of its most prominent monuments comes amid the ongoing national debate over Confederate statues. In Salisbury, a similar debate continues over the “Fame” memorial that stands downtown.

States, cities and universities across the country began debating whether to remove Confederate statues after self-avowed white supremacist Dylann Roof killed nine black worshippers at a church in Charleston, South Carolina, during the summer of 2015. Roof had posted pictures of himself with a Confederate battle flag on social media.