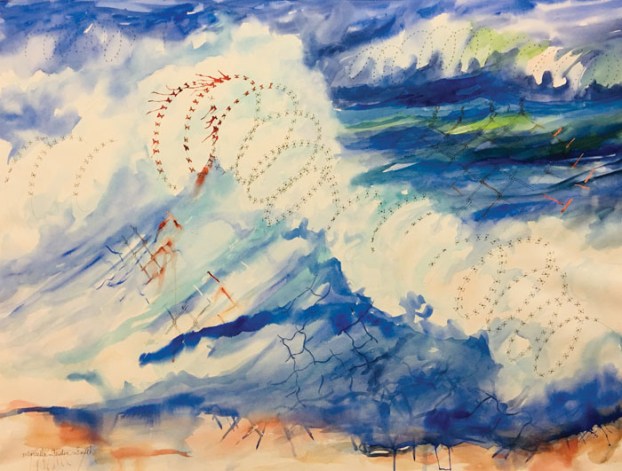 Marietta Smith, watercolor. This marks the fourth time Legg and Smith have joined forces at Rail Walk to produce a two-artist exhibit.

'We both wanted to stretch artistically'

Rail Walk Studios & Gallery will host a reception for “Expanding Expressions” an exhibit of art by Patt Legg and Marietta Foster Smith on Saturday, Aug. 3 from 6-8 p.m. Triple Threat Dancers will perform a portion of the “Tribute to Harriet Tubman” dance at 6:15 p.m. during the reception. Rail Walk gallery is located at 409-413 N Lee St. (between Lee Street theater and Rail Walk Brewery & Eatery). The event is free and open to the public with ample free parking available. The exhibit will be on display Aug. 1-Sept. 14.

This marks the fourth time Legg and Smith have joined forces at Rail Walk to produce a two-artist exhibit. “We like working together,” Smith said. “Our style of art is different from each other’s and we never try to co-ordinate what we are creating but our exhibits always seem to work. We decided to do this exhibit after a conversation in which we both said we felt on the edge of a creative change involving a series of large works. We both wanted to stretch artistically and expand our way of expressing ourselves – thus the name of the exhibit, ‘Expanding Expressions.’”

Patt Legg, whose art for the show is oil on canvas, works out of her studio at the Artist’s Bungalow where she also teaches private art lessons. She is known locally for her classical method of painting portraits and still life art in oil. She embraced this opportunity to exhibit an expanded artistic vision. She says of her work in the exhibit, “I’ve been contemplating moving beyond the box and stretching my imagination. Instead of reality, more of a loose story-telling atmosphere with figures involved – textural and brilliantly colorful.”
Her process begins with a large canvas adding full color and a vision in her head. That vision, she has discovered, can change mid-stream. “I just go with it – see what the canvas is saying and go. I have found this delving into my psyche quite refreshing and sometimes a little unnerving.” She hopes the viewer will feel the energy and find their own story within the art.

Marietta Smith began creating art in the 1960s and was the first artist at Rail Walk Studios & Gallery which was created in 2006. She enjoys learning from and being inspired by other artists but also thrives in time alone. Last fall she applied for the Arts and Cultural Development Grant given by the Rowan Arts Council to take a solo retreat and to purchase over-sized materials for large watercolor art. She spent ten days alone in Dallas, Texas creating sketches, spending time with nature and studying master works at the Dallas Museum of Fine Art. This exhibit is the result of that grant which will also include presenting a watercolor workshop and giving an artist’s talk about her pieces in the exhibit.

When asked about her inspiration for the pieces in “Expanding Expressions” she said that time away to refresh and clear her mind from other responsibilities invited her to look at the world with new eyes. One of the paintings is directly from a dream she had while on the retreat (“Art Exhibit with Crows”). Another painting was inspired by a dance performed by the Triple Threat Dance Company led by Krystal Stukes. “I am so excited that my art will be brought to life at the reception by this talented group of young dancers,” Smith said. The painting is based on their dance “A Tribute to Harriet Tubman.”

Rail Walk Studios and Gallery houses ten artist studios and a large shared gallery. It is open to the public Thursdays, Fridays and Saturdays 11 a.m.-4 p.m. and by appointment. There is no admission fee. For more information visit www.railwalkgallery.com or call 704-469-2781. Contact Patt Legg directly at pattlegg48@gmail.com / 704-232-6000 or Marietta Smith at mariettafsmith@gmail.com / 704-431-8964.