Newton cautions rehab on shoulder is ‘a work in progress’ 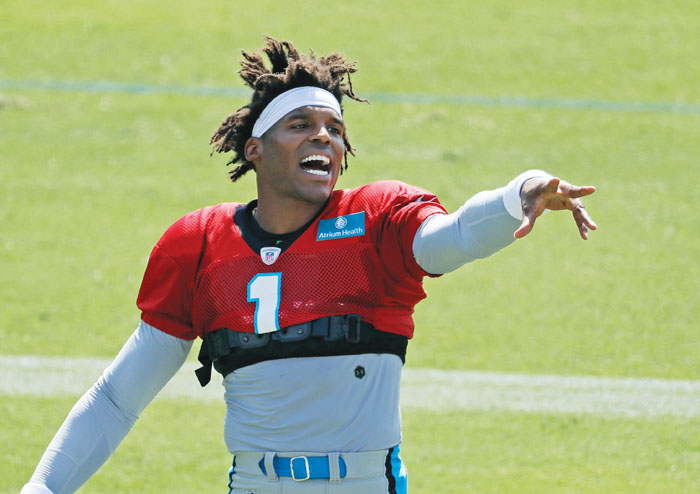 SPARTANBURG, S.C. (AP) — Cam Newton said like many Carolina Panthers fans, he also breathed a sigh of relief after uncorking a 45-yard pass completion to wide receiver Curtis Samuel on the first day of training camp.

But the Panthers quarterback cautioned that his rehab from offseason arthroscopic surgery on his throwing shoulder remains “a work in progress.”

“I don’t want people to assume, ‘Oh, Cam is back,’” Newton said Thursday. “I’m doing a lot of work behind the scenes to make sure that I’m able to practice and to practice with the capabilities I know I can and the team expects me to.”

The Panthers are taking a cautious approach with the 30-year-old quarterback so far.

He’s been held out of team drills three times in eight days as trainers look to ease him back into action and not overload his shoulder. On Thursday Newton didn’t do throw at all and had an ice bag on the shoulder for a portion of practice, although coach Ron Rivera said it was planned day off for his QB.

The 2015 league MVP struggled last season with shoulder problems, preventing him from throwing more than 20 yards downfield and forcing him to miss the final two games.

The Panthers don’t want to find themselves in a similar situation this season.

So even though Panthers quarterbacks coach Scott Turner said last week Newton had “no limitations” at training camp, it’s pretty clear the plan is proceed with caution.

Newton, entering his ninth season, said he’s fine with that.

Early in his career he would refuse to take a day off from practice, but his philosophy has changed.

“One thing I wanted to work on was being honest with myself, knowing when my body is talking to me, knowing that it’s OK to sit out a practice,” said Newton, who has been hit more than any other QB since coming into the league in 2011, according to ESPN Stats and Information. “I’m at a point in my career now where I’m as hungry as ever, but I have to be smarter than ever.”

Coaches want him to be smart on the field, too.

The other is continuing to improve his throwing mechanics, something that he began working on last season when Turner was hired as quarterbacks coach.

“We’re making sure his feet and his eyes are working together,” Turner said. “Making him a little more compact in his upper body, a little more closed off, just to make him as efficient as possible and put the least amount of stress possible on the shoulder.”

Newton is working mostly on short throws at training camp.

“Throwing small helps your technique,” Newton said. “Like if you’re going in the gym and you start shooting 3s (that) doesn’t necessarily help your technique of shooting. The more short intermediate passes you’re working on, making sure your body turns is A1. That’s been my main focus.”

He said practicing longer throws will come “in time.”

Newton first injured the shoulder late in the 2016 season while diving to prevent a defender from scoring on an interception return. He finished out the season, but had surgery the following offseason to repair of partially torn rotator cuff.

Newton has struggled with the shoulder since.

He said it’s been so long since he’s been healthy, he no longer knows what 100 percent feels like.

“A lot of times you have to just get out of your own head,” Newton said. “When you’re hurt for so long, you keep telling yourself, ‘Just do it. Just do it.’”

But coach Ron Rivera said Newton appears to be 100 percent to him, and sees a player who is focused on getting better.