Former Panther comes out of retirement to join NY Jets 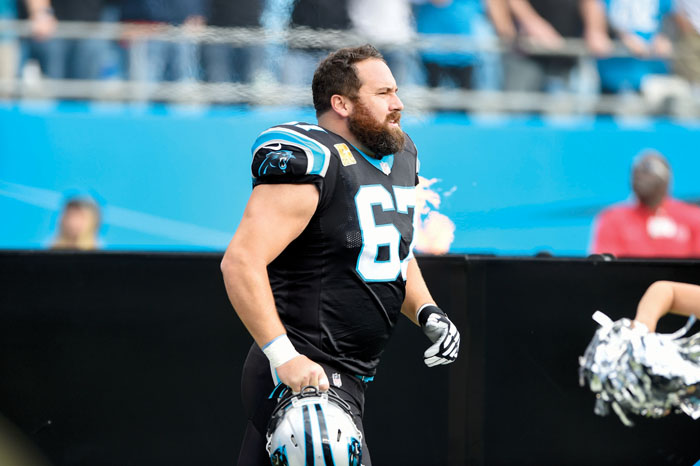 In this Nov. 4, 2018 photo Carolina Panthers center Ryan Kalil (67) runs onto the field before the start of an NFL football game against the Tampa Bay Buccaneers in Charlotte, N.C. Kalil has surprisingly come out of retirement to join the New York Jets. The 34-year-old Kalil and the Jets agreed to terms on a deal Thursday, Aug. 1, 2019. He will have to pass a physical before signing his contract and making it official. (AP Photo/Mike McCarn)

The five-time Pro Bowl center snapped out of retirement Thursday and agreed to terms on a one-year deal with the New York Jets.

The 34-year-old Kalil, who started every game last season for Carolina after playing just six in 2017 because of a neck injury, will need to pass a physical Friday before signing his contract with New York.

Kalil spoke all last season about it being his final one as a player. He walked away from the game when his contract expired after 12 NFL seasons — all with the Panthers.

He apparently had a change of heart in recent weeks and is expected to anchor an offensive line that had a question mark at the center position. Jonotthan Harrison had been slated to start, but he has been mostly a backup during his six-year career.

Coach Adam Gase had recently raved about Harrison and his work with quarterback Sam Darnold, but the Jets decided to upgrade.

It’s the first major acquisition by new general manager Joe Douglas, who was hired in May to replace the fired Mike Maccagnan.

New York struggled last season at center with Spencer Long starting the season. He was replaced by Harrison because of injuries and inconsistency. Under Maccagnan, the Jets explored upgrading the position during free agency in March — with players such as Matt Paradis and Mitch Morse mentioned as possibilities.

Paradis ended up signing a three-year, $27 million contract with Carolina to replace the then-retired Kalil.

Kalil will join the Jets one week into training camp practices.

Kalil tweeted a gif of Billy Crystal tipping a New York Yankees cap — a hello of sorts to Jets fans.

Kalil was a two-time AP All-Pro pick, starting 145 of 148 regular-season games during his time with the Panthers.

DAWSON, 44, RETIRING WITH BROWNS AFTER 20 YEARS AS NFL KICKER

BEREA, Ohio (AP) — Kicker Phil Dawson has retired from the NFL at age 44 after 20 seasons.

He spent his first 14 seasons with the Browns and will sign a one-day contract to ceremonially retire with the franchise. Dawson played in 305 games — the seventh most in league history — and ranks 11th with 1,847 points.

He says the “opportunity to come back home and retire with the organization and the city that I love is incredibly meaningful.” He adds that it “seems right” to do this with the “fans that have been so good to me and my family.”

A Pro Bowl selection in 2012, Dawson began his career with Cleveland’s expansion team in 1999. He joined the 49ers as a free agent in 2013 and played with the Cardinals the last two seasons.

Dawson scored 1,271 points with the Browns, trailing only Hall of Famer Lou Groza in team history. His 441 field goals are eighth on the NFL career list.