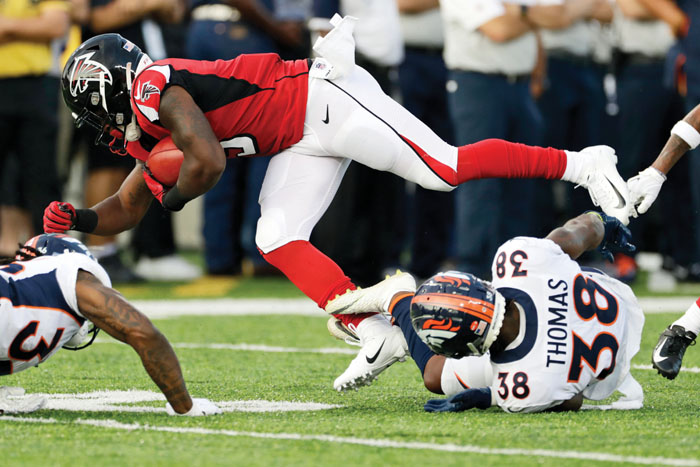 By BARRY WILNER AP Pro Football Writer
CANTON, Ohio (AP) — Hours after visiting a hospital because of a kidney stone, Vic Fangio won a football game.
The new coach of the Denver Broncos saw a late interception set up rookie Juwann Winfree’s 15-yard touchdown catch Thursday night, and his team edged the Atlanta Falcons 14-10 in the Hall of Fame game to open the NFL’s preseason.
Yes, it was an exhibition game — the real first test comes Sept. 9 at Oakland. Still, Fangio served two decades as an NFL assistant before getting his chance to run a team. So this truly was a debut.
Trey Johnson’s interception of Matt Schaub’s pass after the Atlanta backup quarterback was pressured set up Denver at the Falcons 38 with 5:21 remaining. A 14-yard pass interference call on fourth down against Rashard Causey kept Denver in it, but the Broncos were hurt by a holding penalty against rookie Ryan Crozier.
Unfazed, rookie Brett Rypien hurled a pass into the right corner of the end zone, where it was deflected and Winfree latched onto it with 1:26 remaining.
Fangio also became the first coach to utilize the new rule allowing challenges of pass interference calls. Late in the second quarter, Linden Stephens was called for a 43-yard defensive penalty. Officials upheld the call.
Both teams had eight-play first-half drives for touchdowns. Denver’s was finished by Khalfani Muhammad’s 3-yard run up the middle. Atlanta tied it with a precise two-minute drill guided by first-year quarterback Kurt Benkert, who is seeking a backup job to Matt Ryan. Benkert took the Falcons 61 yards in 1:17, hitting running back Brian Hill with a 3-yard touchdown pass.
Benkert conducted another impressive series in the third period, going 56 yards in 12 plays to Giorgio Tavecchio’s 27-yard field goal for a 10-7 lead.
Benkert headed to the locker room early in the fourth quarter with a toe injury. He went 19 of 34 for 185 yards.
Otherwise, it pretty much was a slopfest marred by dropped passes, penalties and missed assignments. Then again, how much can be expected in such an early preseason game?
CLASS OF 2019
The class of 2019 was introduced before the game and walked across the 50-yard line flanked by players from each team. The loudest cheers went to former Broncos cornerback Champ Bailey , which was predictable considering all the orange-clad folks in the stands. Former Chiefs and Falcons tight end Tony Gonzalez gestured and joshed with the Atlanta players as he strode through. Ed Reed , Ty Law,Kevin Mawae , Gil Brandt,Johnny Robinson and the family of late Broncos owner Pat Bowlen also received loud ovations from the crowd of 20,802.
LOCK IT UP
Drew Lock, Denver’s second-round draft pick and perhaps its quarterback of the future — Joe Flacco , acquired from Baltimore, if the starter but sat Thursday night — got plenty of action. He rarely impressed and finished 7 of 11 for 34 yards.
INJURIES
Falcons: Atlanta, which was ravaged by injuries last season, saw fourth-year DT Ra’Shede Hageman go down in the first quarter with a groin problem. Hageman has not played an NFL game since 2016. … WR Marcus Green left in the third period with a groin injury.
Broncos: Denver third-year LB Joe Jones hurt an arm in the second quarter and did not return.
NEXT UP:
Broncos: at Seattle on Thursday night.
Falcons: at Miami on Thursday night.
___
For more NFL coverage: http://www.pro32.ap.org and http://www.twitter.com/AP_NFL