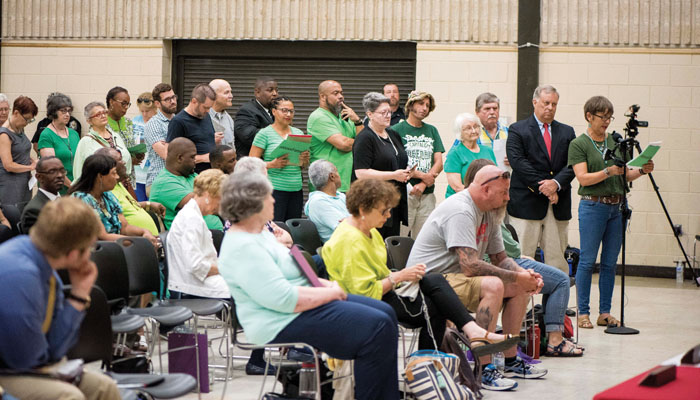 Salisbury City Council incumbents may face a unique campaign issue in 2019 because of the action, or lack thereof, that they’ve taken around the city’s Confederate monument.

And challenger John Struzick’s statements to reporter Liz Moomey in a story published Wednesday (“Struzick looking for ‘new day’ to help keep city’s sights on future”) is proof of that.

The council is not focusing its efforts in the right direction by concentrating on the Confederate monument “Fame,” Struzick said.

“It’s really not shining a positive light of the city in the past,”he said. “Shine a light on the new day and the future.”

To be fair, the issue was forced upon the council, as it’s irresponsible to not discuss the matter following two incidents of vandalism in seven months. But challengers will likely have questions about the manner in which the council handled that post-vandalism discussion.

Struzick represents one part of the spectrum of opinions, and we believe there are other challengers in the race who will ask, “Why has the council failed to take steps to relocate it?” and “Why is the council trying to erase history?”

We believe it was good that the city asked residents and stakeholders to gather and discuss their opinions at a June public hearing. The city has discussed the location of “Fame” many times in the past, including decades before the ongoing, nationwide movement to relocate or remove symbols of the Confederacy. But the vandalism cast the discussion in a different light. A good council should always take steps to gather public opinion on hot-button topics.

But doing that during an election year and just weeks before filing started for the 2019 race guaranteed candidates and voters alike would ask those on the ballot, “What do you think about ‘Fame’?” Council members, themselves, have been tight-lipped about their thoughts. Today, it’s anyone’s guess how a majority of council members feel and whether there’s any chance of further discussion.

“Fame” seems likely to be far from the top of any priority list, as matters of poverty, its effects and the availability of good-paying jobs for people of all backgrounds remains an issue in Salisbury. But the fact that council has not taken action in the time following a mid-June public hearing has prompted those passionate about a potential relocation to wonder “What next?”

Whatever, candidates’ feelings on the symbolism and location of “Fame,” we hope they will discuss the matter in public and private in a civil manner. Talk about “Fame” is divisive, but we should not let conversations divide our city in an irreparable way.