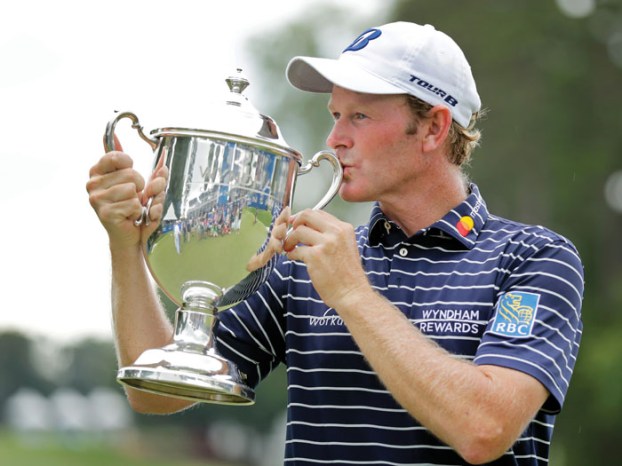 FILE - In this Aug. 19, 2018, file photo, Brandt Snedeker kisses the trophy after winning the Wyndham Championship golf tournament at Sedgefield Country Club in Greensboro, N.C. The PGA Tour’s final regular-season event begins Thursday, Aug. 1, 2019, and as usual there once again will be plenty of bubble players trying to force their way into the top 125 and earn a spot in the first FedEx Cup playoff tournament. But for the first time, there’s some added incentive for those near the top of the points list: The Wyndham Rewards Top 10 program pays out $10 million in bonuses to the top 10 players in the regular season. “It's obviously a huge week for everybody in the field,” defending Wyndham champion Brandt Snedeker said. (AP Photo/Chuck Burton, File)

GREENSBORO (AP) — The focus at the Wyndham Championship is usually on the players trying to qualify for the PGA Tour’s first playoff tournament.

Now there’s more reason to pay attention to those near the top of the points list.

The tour’s final regular-season event begins Thursday, and as usual there once again will be plenty of bubble players trying to force their way into the top 125 and qualify for The Northern Trust — the first of the three FedEx Cup playoff events. It’s followed by the BMW Championship in suburban Chicago, then the Tour Championship in Atlanta.

But for the first time, there’s some added motivation for those near the top of the standings: The new Wyndham Rewards Top 10 program pays out $10 million in bonuses to the top 10 players in the regular season.

“For me, it’s a busy part of the year, but I really wanted to come here, whether or not Wyndham Rewards,” said Paul Casey, who’s at No. 8 on the points list. “That’s just, I guess, the extra kind of incentive this week for me, try and move up a couple of spots if I can.”

While the top three spots have already been locked up, $5.3 million in bonus money remains up for grabs this week at par-70 Sedgefield Country Club.

As a result, 10 of the top 32 players are in the field, led by Casey and No. 13 Webb Simpson. Nine of them have a shot at moving into the top 10 and claiming some of that cash with a win.

A year ago, only two of the top 30 — native North Carolinians Simpson and Chesson Hadley— teed it up here.

“I think everything new starts slow,” Casey said. “The FedEx Cup was slow when it was conceived. The first year was confusing and kind of over before it started. … It’s only going to grow.”

Some other things to watch at Sedgefield this weekend:

Among those with a shot at the big bonuses: Casey will finish fourth with the 500 points that accompany a victory while Simpson and No. 14 Chez Reavie will climb to fifth place if they win. Charles Howell III, at No. 17, can climb as high as sixth, and others who could cash in include No. 25 Sungjae Im, No. 29 Hideki Matsuyama, No. 30 Lucas Glover and No. 31 Corey Conners.

Nobody has had a better round at this tournament than Brandt Snedeker, who opened last year by becoming the 10th player in tour history with a 59, never relinquished the lead and won it for the second time. He hopes his second run as the defending champion goes better than his first: He followed up his victory in 2007 by tying for 69th. “I need to make sure I’m ready to go Thursday, and that my game’s where it needs to be and realize I have to kind of leave last year where it is in the past,” he said.

The field is once again littered with players trying to crack the top 125, make it to next week’s playoff event in New Jersey.

and — if they haven’t already — secure their spots on tour in 2020. Every player on the points list from No. 103 (Mackenzie Hughes) to No. 137 (Ryan Blaum) is here. In the 12 years since this tournament became the last chance at a playoff berth, an average of 2.7 players have played their way into the postseason. Harris English and Nick Taylor did it last year after four pulled it off in 2017.

US hiring slows amid signs of longer-lasting economic damage