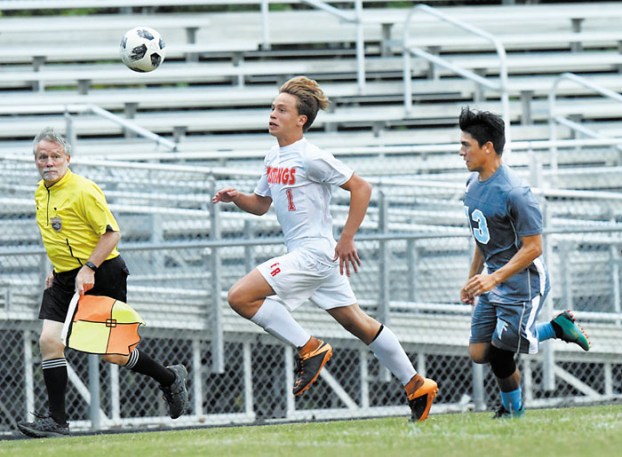 Wayne Hinshaw file photo/for the Salisbury Post ... Shown during a match last year against West Rowan, East Rowan’s Reuben Leslie (1), center, tries to gain possession of the ball. Leslie returns as a key player for the Mustangs this season.

Mustangs soon to be on the pitch 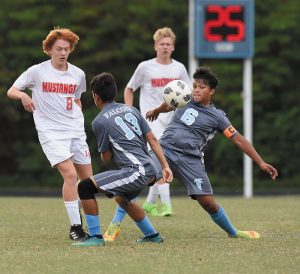 “Alex was a once-in-a-decade kind of player for a program like East,” second-year coach David Whitaker said. “It’s not like we can replace a player that talented with any one guy, but across the board we’ve got a pretty solid team. We won’t have that huge gap this year between our best player and our worst player. Out talent level is a lot more even.”

Whitaker is a product of South Davidson High in Denton and Pfeiffer University. He gained experience coaching South Rowan’s jayvee program before he was tabbed to coach East’s boys soccer program in January, 2018. He works in technical support for the central office for the Rowan County School System, but he’s based at East Rowan. His assistant is East math teacher David Andrews.

East has struggled in boys soccer historically, whether it’s been in the North Piedmont Conference with the Iredell schools or the South Piedmont Conference with the Cabarrus squads. East has made the state playoffs only three times in school history, has never won a state playoff game, and last qualified for the playoffs in 2011 when it was drilled 12-1 by Marvin Ridge in the first round.

“The two main goals we have for this season are to make the playoffs and to keep up with the teams in Rowan County and have one of the best records in the county,” Whitaker said.

East was able to win six matches last season, posting its best winning percentage in a number of years.

“Our seniors had won six total in their first three years, so winning six times as seniors was a big improvement,” Whitaker said. “We had one of the highest-scoring teams in school history with 60 goals.”

The bad news is East graduated eight senior starters. It also should be noted that three of East’s six victories and one of the Mustangs’ two ties came against 1A programs.

Whitaker expects the NPC to be down some and expects a lot of tight conference games. Graduation hit West, East, Carson, Statesville and North Iredell pretty hard. Defending champ South Iredell had the league’s youngest team last season and is expected to be the team to beat again.

East doesn’t figure to score as many goals as it did last season, but it also has a chance to allow fewer.  Some good defenders are back.

“We’ve got three experienced defenders in Drew Roane, Austin Lloyd and Luis Funez,” Whitaker said. “Roane was all-county and will anchor the middle. Lloyd is not afraid of anything and he’ll take on anyone. Funez has added some weight and muscle.”

East’s top scoring threats figure to be senior Reuben Leslie, the team’s No. 2 scorer a year ago with seven goals and an assist.

“Leslie actually has a stronger foot than Kalogermitros,” Whitaker said. “He’s got a cannon.”

Jaxon Mastranunzio had two goals and five assists as a sophomore and will be counted on to boost those offensive totals. Junior Hunter Honeycutt is an experienced midfielder.

East has a competitive goal-keeping situation that won’t be resolved for a week or two. Junior Mason Benge was the No. 2 keeper a year ago, logged significant minutes and accounted for 66 saves. Also competing for the job is freshman Gavin Gullett.

“Competition helps everyone, and we do have some good battles, some wide-open positions,” Whitaker said. “We’ve got several talented freshmen.”

Whitaker said Nathan Taylor and Cole Eagle are freshmen to keep an eye on.

East’s freshmen all will be learning on the varsity. Whitaker said the Mustangs don’t have quite enough players to field a jayvee team this season.

East starts the season at Robinson on Aug. 20.

“We’ve got a a lot of new faces, but we’re optimistic this won’t be a rebuilding year,” Whitaker said. “Teams don’t know much about our guys, and we’ll try to use that to our advantage. Our guys have put in a lot of off-season work and they believe they can compete.”