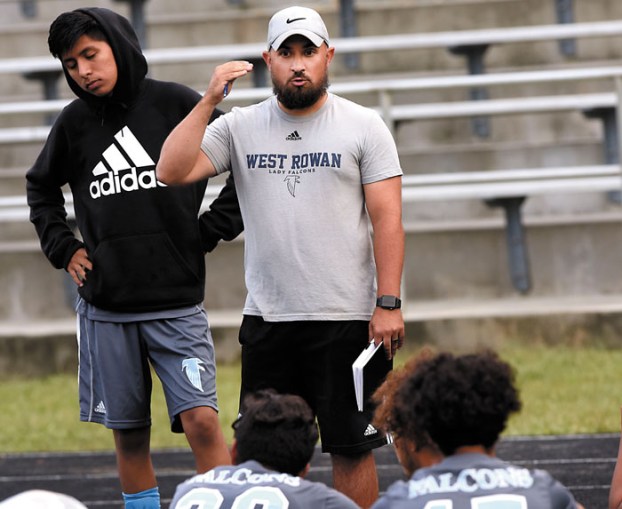 Sometimes it sneaks up on you.

West Rowan’s 4-14-2 won/loss record in boys soccer in 2018 didn’t raise any eyebrows, but reading between the lines, there was significant improvement in head coach Alan Puglia’s first season.

West allowed 50 goals for the season— 2.5 per game —  and the most lopsided loss was 5-0. There were no 9-0 mercy-rule outings, no blowouts. West didn’t win a lot, but opponents had to work to beat them.

“We were strong defensively last year and kept games competitive,” said Puglia, a Pennsylvania native who is a counselor at West. “I’ve looked at West’s scores from past years, and our guys did make some strides. I remember we tied Robinson 1-1, and our teachers were impressed. One of them said to me, ‘Wow, you tied one of the Cabarrus schools.’ Our guys have worked hard. We’re getting there. We’ve got the mindset that we can go out and compete with the teams on our schedule.”

Puglia also coaches West’s girls and was honored as North Piedmont Conference Coach of the Year last spring when those girls rose in the conference standings, with star Lejla Mehmedovic elevating the play of her teammates. He’s optimistic West’s boys also can move up, but it’s going to take a collective effort.  The boys don’t have a transcendent player like Mehmedovic.

“Our offense is kind of an unknown at this point,” Puglia said. “We don’t have that all-star that our opponents are going to have to man-mark. We’ll just have to play a solid team game, try to possess the ball and control the game. If we do that, the goals will come. ”

West lost nine seniors. Most started, so there are numerous holes to fill.

“Fortunately, we had a very good group of jayvees last year, and they have the potential to help a lot,” Puglia said.

The defense should be rock-solid. West’s anchors are experienced seniors Federico Cruz and Mauricio Sandoval. Cruz performs double duty in the fall, as West’s football kicker.

Senior Michael Leon is another player to watch. The midfielder is versatile. He can be counted on do his job defensively, but he also has offensive skills and should provide some goals for the Falcons.

Puglia is working with four goalkeepers. Jose Elizalde and Diego Menendez are returners who enjoyed good moments last year. Elizalde turned in a clean sheet in a 3-0 win against Carson that probably was the highlight of the season.

The teams to beat in the NPC this season will again be the Iredell squads. South Iredell, Statesville and North Iredell didn’t lose to any of the three Rowan NPC schools in 2018. South Iredell won the league with a 9-1 record.

“We’re playing a quality non-conference schedule against teams such as Northwest Cabarrus, Concord, Central Cabarrus and Mooresville,” Puglia said. “That means no days off, and non-conference wins may be hard to come by, but it should be good preparation for when we get down to the 10 conference matches.”

West has a lot of back-to-back games early while it’s still hot. That will test West’s depth.

“We give our guys a few basic rules for soccer as well as for what’s expected of them in the classroom,” Puglia said. “We’ll keep things simple and we’ll be prepared to play sound and smart soccer.”

West has scrimmages scheduled with Pine Lake Prep and Mount Pleasant and opens the season on Aug. 20 at Concord.

By Dennis Davidson dennis.davidson@salisburypost.com SALISBURY — Rowan County’s high school athletes have never had it so good — at least... read more