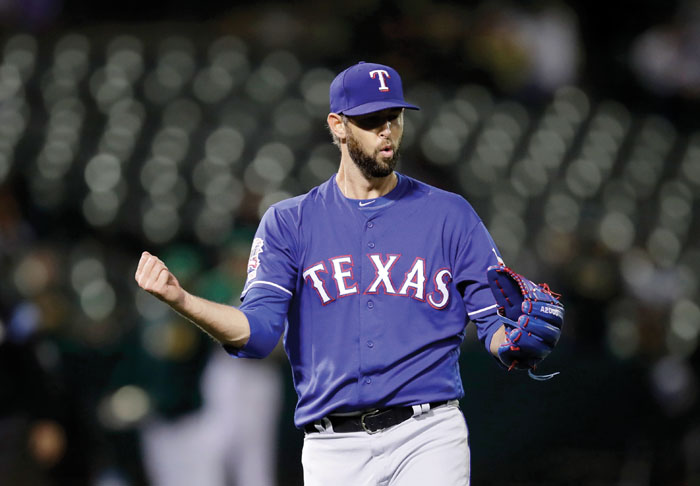 AP Photo/Ben Margot ... Texas Rangers pitcher Chris Martin celebrates the 5-2 win as the final out is made against the Oakland Athletics in the ninth inning of a baseball game last Friday, in Oakland. Martin was traded to the Braves Tuesday night.

Texas announced the deal during its game Tuesday night, just moments after Martin was seen high-fiving teammates in the bullpen before leaving down the tunnel.

Martin was 0-2 with four saves and a 3.08 ERA in 38 appearances. The 33-year-old right-hander has allowed only three earned runs over his last 19 games since May 24. The 6-foot-8 Martin has 24 strikeouts and only one walk in 18 2/3 innings over that span for his hometown Rangers.

Allard, a 21-year-old lefty, was the 14th overall pick by the Braves in the 2015 amateur draft. He was 7-5 with a 4.17 ERA in 20 starts this season for Triple-A Gwinnett. The Rangers assigned him to Triple-A Nashville.

NEW YORK (AP) — If Madison Bumgarner, Noah Syndergaard, Trevor Bauer, Mike Minor or Robbie Ray is going to get dealt to contenders desperate for arms, it will happen this week or not at all.

Baseball’s trade window shuts Wednesday afternoon — completely, not like in years past.

Marcus Stroman, Jason Vargas, Andrew Cashner, Jordan Lyles, Drew Smyly, Homer Bailey, Jake Diekman and Derek Holland are among the pitchers dealt as the deadline approached. Most of the big names fans envisioned changing jerseys have stayed put in this new era of baseball economics, where prospects and youth are more prized than ever.

“Teams are doing a better and better job of understanding younger and younger players, and that’s why you see the value in teams trying to keep prospects,” Toronto general manager Ross Atkins said Monday after dealing Stroman, a first-time All-Star, to the New York Mets for a pair of pitching prospects. “The younger players seem to be really increasing in value.”

Major League Baseball’s deadline for trades without waivers was June 15 from 1923 through 1985, and has been July 31 or Aug. 1 each year since. Players who cleared waivers could be dealt after the deadline, but they had to be in an organization by Aug. 31 to be eligible for the postseason.

That changed in March, when MLB and the players’ association agreed to a rules change that prohibits trades from Aug. 1 through the World Series. The only way a player can change clubs during that period is to be claimed on waivers or get released and sign with a new team.

“I think one of the things we’re going to find in the next couple of days as a result of there being no August trades anymore, there’s going to be a lot of teams looking to make moves to fortify their depth,” Philadelphia general manager Matt Klentak said Monday, when he acquired left-hander Jason Vargas from the Mets.

In a season of record home runs, most contenders think they’ll need more pitching to survive the pennant races and the postseason. With the season about two-thirds over, there had been just 31 complete games entering Monday — only slightly ahead of the pace that led to a record-low 42 last year. That’s down from 104 in 2015, 209 in 2003 and 302 in 1998, a sign of just how much the sport has transformed in two decades. Managers want plenty of power arms available inning after inning, leading rebuilding teams to sell off their veterans to clubs hoping to win now.

The Los Angeles Dodgers, New York Yankees and Houston Astros have large leads and the Atlanta Braves are comfortably atop their division. But the Yankees’ starting pitching has stumbled in the past week, leading them to consider deals for starters and relievers with teams hungering for top young players such as Gleyber Torres, Miguel Andújar, Clint Frazier and Deivi Garcia.

Houston is looking for a starter to join a rotation headed by Justin Verlander, Wade Miley and Gerrit Cole. The Dodgers have been seeking relievers from a market that may include Joe Biagini, Ian Kennedy, Ken Giles, Mychal Givens, Shane Greene, Francisco Liriano and Seth Lugo.

About a half-dozen teams in each league are competing to reach the wild-card playoffs, forcing some of them to make critical decisions whether to go for it or give up and stock for the future.

Even though the Mets are 50-55, first-year general manager Brodie Van Wagenen’s approach is to win now.

“Brodie understands that I know we can win now. He knows that we can win now,” manager Mickey Callaway said. “We both feel like we can win and get on a run and get into this thing.”

With so many teams still contending — or at least thinking they are contending — some GMs might push for a later trade deadline to be considered for 2020. Already there will be one big change next year: The active roster limit from Sept. 1 on will be 28, down from 40. In exchange, the maximum from the start of the season through August will increase from 25 to 26.

Zion Williamson having a fun summer