‘God’s heart was the first to break’: The city loses a gentle giant 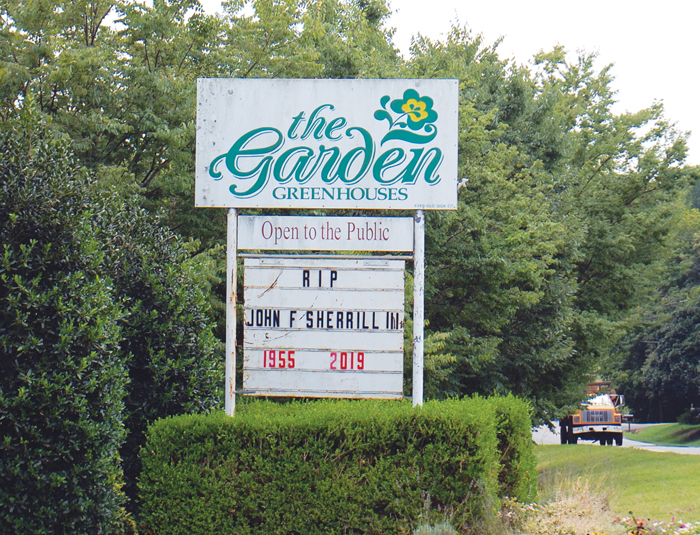 The Rev. Robert Black said his 3-year-old daughter was battling an illness recently and he took some vacation days to stay home with her.

During that same week, John Sherrill, owner of The Garden Greenhouses, was doing some landscape work around the Blacks’ house. Although Sherrill stood 6-8 and could fill a doorway, he was a gentle giant.

He smiled all the time, told good stories and jokes, and he loved people, animals and, obviously, plants. He easily made fast friends with the little girl while he was working.

“When is St. John coming back?” Black’s daughter asked one day.

Out of nowhere last week, a heart attack felled John Sherrill like a giant redwood — or at least that’s the impact his death has had on his friends, family and loyal customers. 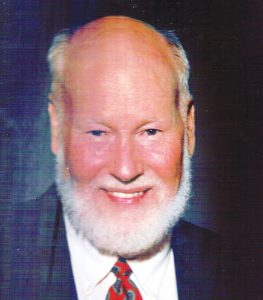 Close to 400 people attended his funeral Monday in a standing-room-only service at St. Luke’s Episcopal Church. Many were still in disbelief that Sherrill was gone at 64.

Black said make no mistake — it was not God’s will for Sherrill to die.

“God’s heart was the first one to break,” he said.

You realized how many people Sherrill knew and came in contact with by hearing their reactions last week to the news. They had just seen him yesterday, or bought some flowers from him a couple of days earlier, or had an appointment with him tomorrow.

Two weeks ago at early church, Sarah Kellogg told Sherrill how healthy he looked. He rolled up a sleeve to show his strong, sun-baked arm.

“Everybody had a recent story,” said Clyde, the one-name local artist who beautifully arranged the funeral flowers, “and most of them were, ‘John Sherrill did something for me.'”

Sherrill grew up in the Fulton Heights neighborhood of Salisbury. One of his friends and fellow classmates, Cyndi Almond Jones, said when she called her brother in Tennessee with the news of Sherrill’s death, he said, “John Sherrill —  he helped me plant my very first garden.”

They were still kids, with permission to dig up a plot of ground at the end of Wiley Avenue. “He looked up,” Jones said of her brother, “and there was John Sherrill with a shovel in his hand.”

Later, she talked with cousin John Hudson and learned Sherrill had taught him how to play baseball. Even as a kid, Jones said, Sherrill was a gentleman and always wanting to help.

“He was one of the kindest people I’ve ever known,” said Jones, who graduated with Sherrill from Salisbury High School in 1973 and later became a veterinarian. “He just reached out to everyone. He didn’t know a stranger, and he never had an unkind word to say to anyone.”

Because of Sherrill’s long association with The Garden Greenhouses, established by his family in 1962, many people forgot he earned a bachelor’s degree in education from the University of North Carolina at Chapel Hill and a master’s degree from Appalachian State.

He started out as a teacher, and that’s when he met Salisbury attorney Cecil Whitley, a fellow Jaycee. The two men forged a strong friendship, even though Whitley laughs that they were on different ends of the political spectrum.

Back in their Jaycees days, the local organization did civic project after civic project, often earning state and national recognition for its efforts.

“John was just a Trojan when it came to community service stuff,” Whitley said. “He was out there working on every project we had.”

Whitley said Sherrill helped him and other Jaycees realize teachers know who the real needy children are in a community, and the organization successfully established a Christmas program for children that grew from eight kids to 40.

“Every project, John was there,'”Whitley said. “I can’t believe the number of people he has helped over the years. He never patted himself on the back. He just quietly went around trying to help people.

“He is one of the best people I ever met.”

Located on Woodleaf Road, The Garden Greenhouses went from selling flowers and vegetables to adding a nursery and landscaping. Rod Graham, who now has his own landscaping business in Rock Hill, South Carolina, worked with Sherrill about 10 years and encouraged him to expand.

The pair were imposing — both stood 6-8. Graham said Sherrill “always gave everybody who worked for him a chance.” It meant a lot to him, Graham said, when Sherrill made him “director of operations” at age 33.

“He was such a hard worker — man, he worked all the time,” Graham said, remembering times when he would tell Sherrill to stop and enjoy the brilliant colors of the flowers around him.

Graham loved when Sherrill told a joke, then laughed hard enough that his shoulders would go up toward his ears.

Sherrill had some tough times. He lost his first wife, Judy, in 2000. But he found love again with the former Lee Clement Piper. After years of courtship, the pair married in 2018.

“He did things for people no one ever knew about,” Lee Sherrill said Monday.

Belle Piper, one of Sherrill’s stepchildren, said he was a loving individual who had a story for everything. When he told a joke, even if it was corny, his timing was perfect, Belle said.

When Sherrill proposed marriage to Lee, he also proposed to her children.

“He always made you feel better about things, like it’s not really that serious,”  said Belle’s friend, Anita Edwards.

Robert Jones, who likes to have a nickname for friends, called Sherrill “Papa.” With his white beard and baldpate — and his readiness to play Santa Claus —  he just looked like a papa, Jones said.

Jones often was visiting the Sherrills’ home when John would come in from a long day’s work with a smile on his face, no matter what. Sherrill often picked up Wolfsie, his cherished Pomeranian, and they went to their favorite chair, where the dog rested on his chest or in the crook of his arm.

Sherrill and Wolfsie made quite a picture — big man, little dog. Jones, the veterinarian, worries that Wolfsie also will be in mourning.

Many years ago, Jones once had to put to sleep Sherrill’s doberman. Sherrill found a spot on the floor and held the dog’s head in his lap as the injection was administered.

“He sat there and cried,” Jones said, acknowledging she felt some guilt for making a kind-hearted man like Sherrill sob.

Jones said when she was having a bad day, she would look for excuses to buy a plant or look around the greenhouses so she could talk with Sherrill.

“He’s the one person I felt comfortable to talk with because he was such a real person,” Jones said. “Salisbury won’t be the same place for me any more.”

It’s hard to choose a more appropriate Bible passage than the one read at John Sherrill’s funeral Monday.

Bethany Sinnott read the words of Ecclesiastes 3, the passage that folk artists made into popular songs a long time ago. The words begin, “For everything there is a season and a time for every matter under heaven. … a time to plant and a time to pluck up what is planted.”

Death is a bit like gardening, Black said. When it comes, life is changed but not ended.

When is St. John coming back? Live a life like John Sherrill’s, and you never go away.