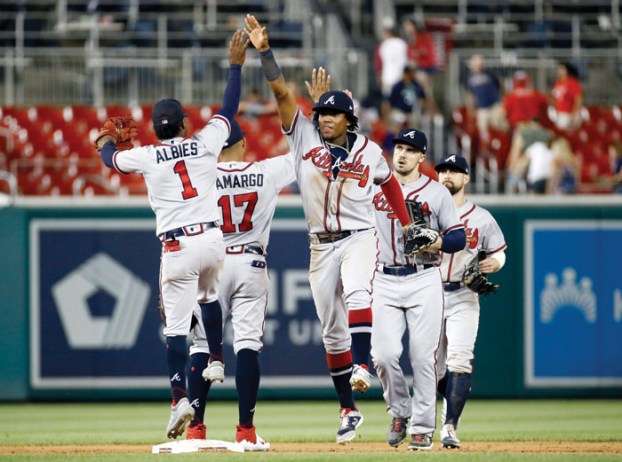 By HARVEY VALENTINE Associated Press
WASHINGTON (AP) — Adam Duvall returned to his previous All-Star form at the perfect time for the Atlanta Braves.
Duvall had two home runs and four hits, Josh Donaldson added a three-run homer and the Braves beat Washington 11-8 on Tuesday night to reopen a 5½-game lead over the second-place Nationals in the NL East.
Duvall was recalled from Triple-A Gwinnett on July 27 after Nick Markakis broke his left wrist. The former National League All-Star is hitting .529 with three homers in four games.
“That’s the Adam Duvall I remember in Cincinnati,” Braves manager Brian Snitker said of the outfielder, who earned an All-Star nod with the Reds in 2016.
The Braves acquired Duvall on July 30 of last season and he hit .132 in 33 games. This year, he was sent down to Gwinnett near the end of spring training and hit .259 with 29 home runs and 84 RBIs in 94 games.
“It wasn’t the easiest thing, but I knew I had to go down there and go to work and try to get better,” Duvall said. “That’s what I was sent there to do, and that’s what I felt like I did.”
Julio Teheran (6-7) allowed two runs and seven hits in 6 2/3 innings for Atlanta, which raced to an 11-1 lead and held on to split the first two games of the three-game series.
“He attacked the strike zone,” Nationals manager Dave Martinez said. “I mean, he was pounding the strike zone — fastballs, sliders.”
Teheran had a 1.48 ERA in July as the Braves won four of his five starts, but was just 1-1 those games.
On a night the team traded for right-handed reliever Chris Martin from the Texas Rangers, the Braves bullpen allowed six runs in 2 1/3 innings.
With three-time Cy Young Award winner Max Scherzer back on the injured list with a rhomboid strain, the Nationals brought up Erick Fedde from Double-A Harrisburg to take his turn in the rotation. Fedde (1-2) allowed nine runs, nine hits and four walks in 3 2/3 innings.
“You can’t fall behind hitters,” Martinez said. “Even when he gets ahead, he’s going back to 2-2, 3-2, and it’s tough to pitch that way, especially in the big leagues. It really is. He just wasn’t very good today.”
Ozzie Albies and Ender Inciarte each had three hits for Atlanta.
Yan Gomes, Trea Turner and Juan Soto homered for the Nationals, who rallied late.
Fedde threw a run-scoring wild pitch in the second, then Atlanta scored four runs each in the third and fourth to take an 9-0 lead.
Freddie Freeman and Brian McCann hit RBI singles in the third, and Inciarte followed with a two-run double. One batter later, Duvall homered and chased Fedde.
“I felt like it was up to me to step up,” Duvall said. “I felt like the team needed me to come up and at least put together some good at-bats and help the team win any way I can.”
Brian Dozier hit an RBI single in the sixth.
Duvall hit his second homer in the seventh off Javy Guerra.
TRADE
Atlanta acquired RHP Chris Martin from the Texas Rangers for minor league pitcher Kolby Allard. Martin was 0-2 with four saves and a 3.08 ERA in 38 appearances.
TURNER’S TIME OUT
Nationals SS Turner left after seven innings, sitting out an inning for the first time since he returned from the IL on May 17.
TRAINER’S ROOM
Braves: Manager Brian Snitker said SS Dansby Swanson (bruised right foot) could be activated when eligible this weekend against Cincinnati.
Nationals: 1B Matt Adams missed his second straight game since he was hit by a pitch Sunday and bruised his right foot.
UP NEXT
Atlanta RHP Mike Soroka (10-2, 2.44 ERA starts Wednesday against RHP Aníbal Sánchez (6-6, 3.63), who has won six straight decisions. Soroka won 10 straight decisions before losing to Washington on July 20.
___
More AP MLB: https://apnews.com/MLB and https://twitter.com/AP_Sports