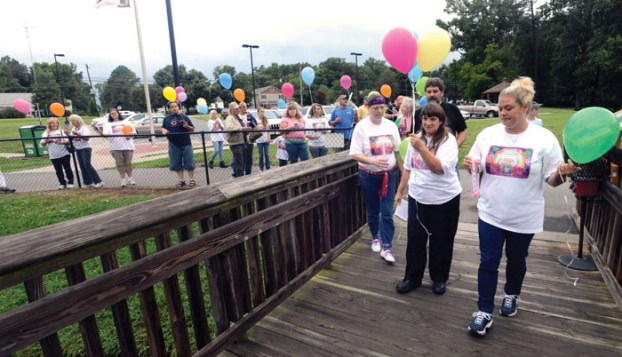 Carolyn Parsons, with Tonya Guessford and Tonya Beemster on each side, walks onto the pier at the vigil for Erica Parsons in Granite Lake Park in August 2014. Wayne Hinshaw/Salisbury Post file photo

A look back: Erica Parsons reported missing six years ago 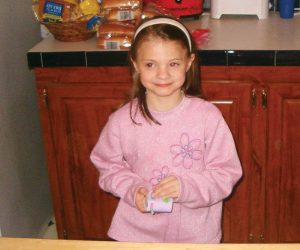 His report on July 30, 2013, sparked a maelstrom of activity surrounding his parents, Sandy and Casey Parsons, leading to their arrest for fraud in 2015 and for the murder of Erica in 2018.

Casey and Sandy Parsons remain in the Rowan County Detention Center, awaiting trial in April on charges of murdering the girl. Rowan County Sheriff’s Office investigators said the couple abused and mistreated Erica for years and, together, killed her and buried her remains in a shallow grave in Chesterfield, South Carolina, not far from the home of Sandy Parsons’ mother.

In 2013, Jamie told investigators his parents routinely abused Erica. According to his 2015 testimony in federal court, he abused Erica as did some of his siblings. Sandy and Casey Parsons adopted Erica as a baby.

Erica’s biological mother, Carolyn Parsons, was once married to Sandy’s brother, Stevie. She had seen Erica very little over the years.

Rebellious teen
Jamie Parsons told investigators in 2013 that he last saw Erica in either November or December 2011. He said he awoke one morning to find Erica gone, and his parents told him they took the 13-year-old to live with her biological grandmother in Asheville. Sandy and Casey Parsons told investigators they took Erica along with their biological daughter, Brook, to Asheville.

But Brook told a different story — that she was at home with the other Parsons children that day.
Investigators said the parents continued to tell a fabricated story about Erica’s whereabouts. They initially spoke with investigators but quickly hired local attorney Carlyle Sherrill to represent them. Sherrill facilitated numerous interviews with local, state and national reporters about her clients’ missing daughter.

In one interview with the Salisbury Post, Sherrill said Erica was a “rebellious teenager” who didn’t want to be contacted.

On Aug. 14, 2013, Rowan County investigators and FBI agents searched the home of Sandy and Casey Parsons, at 218 Miller Chapel Road, for clues about where Erica might be. Investigators found no evidence that the girl had lived at the home. But they did find numerous books and other literature on child death cases, including that of murdered beauty queen JonBenet Ramsey and Susan Smith, a South Carolina mother who killed her two children.

Investigators searched several properties where the Parsonses formerly lived and those of their parents and other relatives.

In August 2013, investigators searched 270 Sutton Road in China Grove, where Sandy’s father, William Steven Parsons, and stepmother, Janet Parsons, lived. Detectives searched a shed on the property that belonged to Sandy and only he had access to.

Later that month, Sandy and Casey appeared on “The Dr. Phil Show.” Sandy agreed to take a lie detector test and failed it when the test showed he was “deceptive.” Casey claimed she was sick and refused to be tested.

It was revealed that Casey had acted as a surrogate in 2000 for Michigan couple Vern and Amy Miller and told the Millers that she miscarried. Amy Miller told the Post she always felt there was something that Casey was not telling her, and she continued to pursue the issue until she was contacted by Casey’s sister, Robin Ashley.

Ashley told Miller that her sister had lied and had not had a miscarriage. The Millers got law enforcement involved after they were told that Casey intended to sell their child. The couple gained custody of their son after he was born.

In July 2014, Sandy and Casey Parsons were indicted on federal charges of tax fraud, mail fraud and identity theft.

Rowan and federal investigators said they continued to receive checks and other government assistance to support Erica even though she had not been in their care or home since 2011. They received government adoption assistance, food and nutrition assistance, and Medicaid and Social Security benefits.

Sandy Parsons claimed Erica as a dependent on his 2012 tax returns. Casey prepared tax forms for her family using false information including listing the identity of dependents. Casey Parsons reported to the Social Security Administration on Aug. 29, 2012, and June 25, 2013, applications for Supplemental Security Income benefits that Erica lived in the Parsons household. On April 10, 1999, Casey and Sandy applied for adoption assistance with the Cabarrus County Department of Social Services on behalf of Erica.

The Parsonses received a total of $12,680 from January 2012 to August 2013 in monthly adoption assistance payments, according to court records.

Casey incurred federally guaranteed student loan debt in the amount of $23,142, which went unpaid. She did not file a tax return after 2010 and thus avoided the potential debt collection. She also did not claim $12,791 in income from the sale of items on the eBay website. In some cases, customers never received items they purchased from the couple.

Sandy was sentenced to seven years in prison, and Casey, to 10 years. Before their return to Rowan County to face murder charges, the two were serving their sentences in separate federal prisons.

During the federal trial, Jamie Parsons testified that Erica, his adoptive sister, was punched, her fingers broken, and kept locked in a closet, where she was left even if she used the bathroom while inside.
Even while in prison, the pair maintained that — as far as they knew — Erica was alive and well.

In August 2016, Sandy Parsons, who was serving time at a federal prison in Butner, sought out Lt. Chad Moose of the Rowan County Sheriff’s Office and told the detective that Erica was dead.

In September 2016, Rowan investigators, assisted by the FBI and State Bureau of Investigation, uncovered what many had feared — the skeletal remains of Erica Parsons.

An autopsy revealed Erica had multiple broken bones in various stages of healing in her nose, jaw, arm, a finger, several ribs and a shinbone. The autopsy also revealed that Erica was malnourished and had low bone density for her age and a pronounced growth deficit. She may have suffered from an untreated infection or sepsis, or kidney failure.

The girl’s body had been dismembered and the remains buried.

More than six years after she disappeared, Erica Parsons’ remains were returned to Rowan County. On Feb. 25, 2017, family, law enforcement officers and strangers filled First Baptist Church in Salisbury for a funeral service.

In March 2018, Rowan County District Attorney Brandy Cook said during a brief hearing that she would seek the death penalty in the murder case against Casey Parsons. A month later, she announced the same decision for Sandy Parsons.

‘God’s heart was the first to break’: The city loses a gentle giant

The Rev. Robert Black said his 3-year-old daughter was battling an illness recently and he took some vacation days to... read more