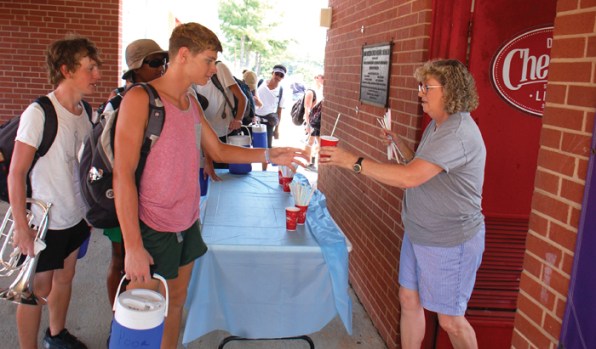 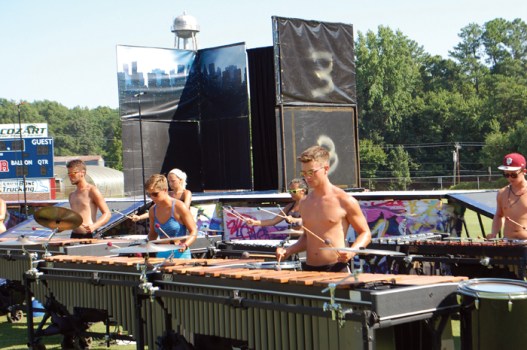 Mark Wineka/Salisbury Post Percussionists with the Spirit of Atlanta Drum & Bugle Corps practice Sunday morning at East Rowan High. They were preparing for a Sunday night performance and competition in Winston-Salem, following up on a Saturday night appearance in Atlanta. 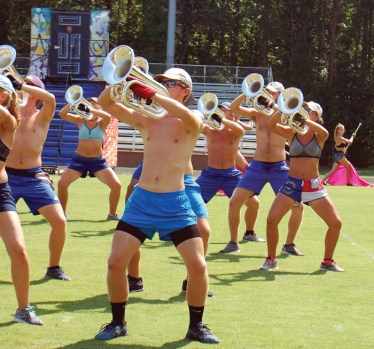 ROCKWELL — For Shelby Lowe, call it a homecoming.

She gave a giant hug to her former band director at East Rowan High School, Emily McNeil, and grabbed quick conversations with her siblings and friends.

Shelby and the others had just finished a hot, strenuous Sunday morning practice on the East Rowan football field. In less than two hours, they had to “EPL” — eat, pack and load — and by 2:05 p.m., they were expected to have their “BIS.”

Translation: They had to have their butts in the seats of four charter buses the Spirit of Atlanta was taking to Winston-Salem for a Sunday night performance at NightBEAT, held at Wake Forest University’s BB&T Field.

The Spirit of Atlanta rolled into the East Rowan High parking lot early Sunday morning after having performed Saturday night before a home crowd and thousands of people at Mercedes-Benz Stadium in Atlanta.

As they usually do elsewhere, the 154 brass, percussion and color guard members — ages 15 to 22 — spread out their air mattresses on the East Rowan High gymnasium floor and tried to add a few hours of sleep to whatever they were able to manage on the bus.

They were then up for a 9 a.m. breakfast, served out of the tractor-trailer food truck that accompanies the group. Loading out all the gear from two other tractor-trailers, warmups and practice in the East football stadium lasted roughly until noon.

They then had to load all the equipment back into the tractor-trailers, eat, shower and dress for the ride to Winston-Salem. And this was a pretty typical day.

“It’s like a marching band on steroids,” Dawn Lowe said of both the corps’ regimen and caliber of performance.

Word quickly spread that Shelby Lowe, who plays the baritone and is a four-year veteran of Spirit of Atlanta, was a 2016 graduate of East Rowan High. So naturally everyone was asking her where things were, especially the restrooms.

To get an idea of the grueling tour schedule Spirit of Atlanta follows, imagine 25 competitively judged performances between June 24 and Aug. 8. Over that time, Spirit of Atlanta travels to 14 different states, going as far as Florida, Texas, Minnesota and New York.

“It’s worth it, just to see these guys grow,” said Chris Moore, the corps director and also band director for Georgia Tech.

Over the summer, the corps will play before some 300,000 people. Spirit of Atlanta belongs to Drum Corps International, through which it has been competing since 1977.

The goal during the tour is to head into the big finale in Indianapolis on Aug. 8-10 as a Top 12 finalist, which means an ensemble is eligible to compete in the overall championship finale. Spirit of Atlanta has had a Top 12 status 20 times and currently is No. 13 in the standings.

The “World Class” group to which Spirit of Atlanta belongs has 22 teams.

The group’s tour schedule is preceded by long weeks of “spring training” in Atlanta, which for Shelby Lowe started May 17.

Moore says the young men and women expend 6,000 calories a day and have to be fed four times daily.

The team travels with a chef, nutritionist, athletic trainer and medical team.

The performers almost always sleep in gyms on air mattresses, live mostly out of backpacks, and get to go to a laundry and make a Walmart run about every two weeks.

And this isn’t a paid gig. In fact, they have to audition and pay tuition to be part of the corps.

“She doesn’t get paid, except for our applause,” Dawn Lowe said.

It may sound like the stuff of military bootcamps, but Ed Medina, a tour operations assistant, says it is more like a sports team.

Indeed, Lowe and other corps members look and are required to perform like athletes in their 11- to 13-minute shows that call for constant movement.

“It is worth it,” Lowe said, adding that no matter the size of the audience, she gets a thrill performing the elaborate productions with the rest of the corps. “It makes all the hard work really worth it.”

And her strongest friendships have been forged with people she meets with the corps, which has a strong alumni base.

“It’s like the coolest unknown thing in the world,” Lowe said of the drum corps life. “So many people don’t know about it.”

Lowe comes by her band performance roots honestly. Her dad, Greg, has been a longtime member of the Carolina Crown Drum & Bugle Corps, and as a youngster, Shelby used to run judges’ scores to the booth during Carolina Crown competitions.

Lowe first auditioned for Spirit of Atlanta as a senior at East Rowan. Her parents try to take in Spirit of Atlanta performances when they can. They’ve been to places such as Valdosta, Georgia, and Lexington, South Carolina, and planned to go to Winston-Salem on Sunday night.

Dawn arranges through Select Bakery for the corps to have Cheerwine slices whenever possible, and she made sure they tasted Cheerwine slushies Sunday.

After Winston-Salem, the Spirit of Atlanta’s schedule takes the corps to Annapolis, Maryland, on Tuesday. Then it’s on to Rome, New York, on Thursday; Allentown, Pennsylvania, on Saturday; Pittsburgh next Sunday; and Indianapolis on Aug. 8.

Shelby, Jocelyn and Chaney Lowe are triplets. They also have a 25-year-old sister, Carmen.

Shelby will be a student athletic trainer with the Appalachian State University football team this fall. She played for the ASU band only in her freshman year, but her experience with Sprit of Atlanta has more than filled the void.