Whitey Harwood: My own kind of hat 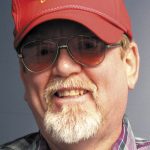 The other day, I was leaving the library and this nice young lady was walking in. She looked at me and said, “Are you Whitey Harwood?”

“I was hoping to meet you,” she said. “So I could tell you how much I enjoy reading your articles in the paper.”

“Thank you,” I said. “That makes up for what them other three people wrote about me.”

“I hope you didn’t let what they wrote bother you. You said more in one sentence than they did in all three letters,” she told me.

Now, for the rest of the story.

I don’t mind anyone misunderstanding me. But I did mind getting misquoted. So now Editor Josh Bergeron lets me suggest my own headlines. This one, “My own kind of hat,” was also a song by Merle Haggard.

One day, I was breaking bread with a good friend. He was wearing a cap with an eagle and “U.S. Army” printed on it. I was wearing a fedora. This feller walked up to the table and looked at my friend “Cap” and said, “Thank you for your service.”

The stranger asked, “Where did you serve?”

I could tell “Cap” was a little uneasy, but he smiled and said, “I was in the battle of the bulge.” He had just lost about 20 pounds.

The stranger picked up “Cap’s” ticket and said, “God bless you. This one is on me.”

Way back in the early ’90s, I was having a problem and couldn’t find anyone to help me. One day a friend suggested I call then-Rep. Bill Hefner’s office in Concord. He gave me the number, and I called.

I told the lady on the phone I was having a problem and would like to make an appointment. She told me I didn’t need one, just walk in.

So I did. The lady at the desk told me to “have a seat” and that Jenny would see me next.

Jenny called me in and, smiling, she said, “Have a seat.” So I did.

The first thing Jenny said, before I ever opened my mouth, was, “When were you in combat?”

I looked at her and said, “Look, I didn’t even mention being in service, much less being in combat.”

She said, “You don’t have to. I can look at you and tell you were in combat in Vietnam.”

So to answer anyone that questions if I wear an Army hat, the answer is, “Hell no.” I don’t have to. I wear my own kind of hat.

Now here’s some good-news, bad-news for recent letter writers Kathryn, Julie and Jim. The good news is I’m done. The bad news is Jim’s letter didn’t make me sick, but it did give me another chance to work on my post-traumatic stress disorder.

Sorry I haven’t written a letter in about six weeks. The Post staff and I have been in friendly negotiations... read more