The end of an adventure: Rowan Elections Director Nancy Evans to retire 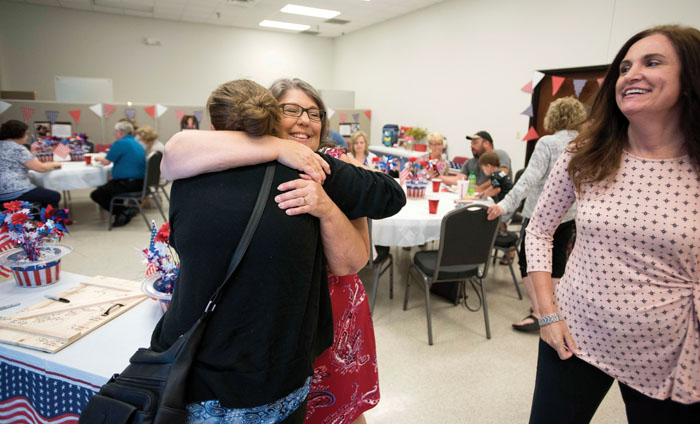 JON C. LAKEY/SALISBURY POST Retiring elections director Nancy Evans gets a hug from her daughter-in-law Crystal Hatter as County HR Director Kelly Natoli (right) looks on. A reception was held at the Rowan County Board of Elections on Thursday afternoon to celebrate the retirement of longtime Elections Director Nancy Evans. Family, friends, co-workers, county employees, elected officials and election officials from other counties took part in the reception and coffered congratulations on her retirement. Current Election Deputy Brenda McCubbins will become the new director of the elections department. Salisbury, NC 7/25/19

SALISBURY — Nancy Evans learned to adapt early in her career at the Rowan County Board of Elections Office, keeping up with changes in the law, technology and location.

On July 31, she will say goodbye to what’s been an “adventure” as elections director.

“This last swing from ’87 on has been an adventure,” Evans said. “You just never know until the election is getting into swing what’s going to happen.”

She began in 1981 as an elections deputy when the the Board of Elections was in the county office building on Main Street. To register, voters came to the office, took an oath and completed their registration application. Voters could cast ballots only on Election Day unless they had an excuse.

“You had one day to do it, and unless you were in the hospital or out of the county, that was the only other way that you could vote,” Evans said.

Voters had to be registered 30 days before an election and be living at the registered address with no exception. The process, Evans said, was “more personal for the voter as far as the meaning of being registered to vote.”

When she started at the elections office, Rowan County had about 40,000 registered voters. Now, there are about 96,000. She said people have more opportunities to register and vote today than they had in the 1980s.

“If you really want to register to vote, you can do it,” Evans said.

And changes in laws have allowed registration at driver’s license offices and during voter registration drives.

Evans didn’t plan on staying at the elections office for all these years. She initially planned to stay home with her son, Jonathan, who was born in 1984. Patricia Nelson, the elections supervisor at the time, asked her to return as a part-time employee. She did in 1987 and never left again, except for several months for the birth of her daughter, Kendra.

In 1992, Nelson retired, and Evans stepped up to become director, appointed by the state Board of Elections.

Through the changing laws, Evans has discovered that every election is different, including hand counting choice voting when voters choose their top three candidates; preparation for requiring voter IDs and a reversal of that policy in 2016; and the high turnout for the 2018 election.

“With the legislature making election law changes every year, you don’t know exactly how this election is going to play out for us here,” Evans said. “We’ve even had to — the day before an election — get something out to the precinct officials. You never put your guard down that, ‘I got it covered.’ You’re always ready for that next hurdle that you’re going to have to go over.”

Brenda McCubbins, incoming elections director, said Evans has taught her to be calm amid the chaos.

Becky Galliger, elections director for Iredell County, said there is a calming force about Evans.

And Susan Price, a Rowan elections deputy, said the office motto is, “We go where the day takes us.” The staff can change on the dime and, if needed, all the workers shift responsibilities, help out each one another and then recenter, she said.

Evans said the elections staff is a team that works together.

“I don’t push my position of being their boss on them,” Evans said.

Tara Davis, an elections assistant, said Evans gets “in the down-and-dirty” with the staff, adding she doesn’t tell them what to do but shows them instead.

The dynamic of the office works because the staffers share the same principles.

“We just want to be here for people to vote,” Evans said. “You either like it or you don’t. If you like it, then you start to get that adrenaline, and that gets you through it.”

Evans knows the value of a vote. She has seen plenty of close elections resulting in recounts, ties, a candidate winning by one vote and a write-in candidate sweeping the election.

“‘My vote don’t count,’” Evans said. “You hear that all the time, and I’ll say, ‘Yes it does.’ Your vote counts, and there’s a lot of times when if your family would have voted — that’s five people — it could change the outcome of the election.”

The next election is for municipal offices, which will give the office without Evans a chance to be ready to go for 2020 — when a president, governor, U.S. senator and federal and state lawmakers will be chosen.

When Evans became director, Nelson warned her that municipal elections are difficult because those voters are more tuned in and it’s all local candidates.

Election Day is a long one, starting at 5 a.m. — with a tradition of words of encouragement — and ending at 10 or 11 p.m. Throughout the day, the staff assists precinct workers and voters.

The next day, work resumes at 8 a.m., as canvassing starts. Evans said she generally could breathe a sigh of relief around Thanksgiving, unless there was a recount.

Evans said she is confident McCubbins will fulfill the duties of elections director well.

On Aug. 1, her first day of retirement, Evans won’t set her alarm clock. She plans to make quilts, play with her 2-year-old grandson and help McCubbins, if needed.

“It’s more than a job,” Evans said. “It’s going to be hard to leave something that you’ve been doing for so long.”